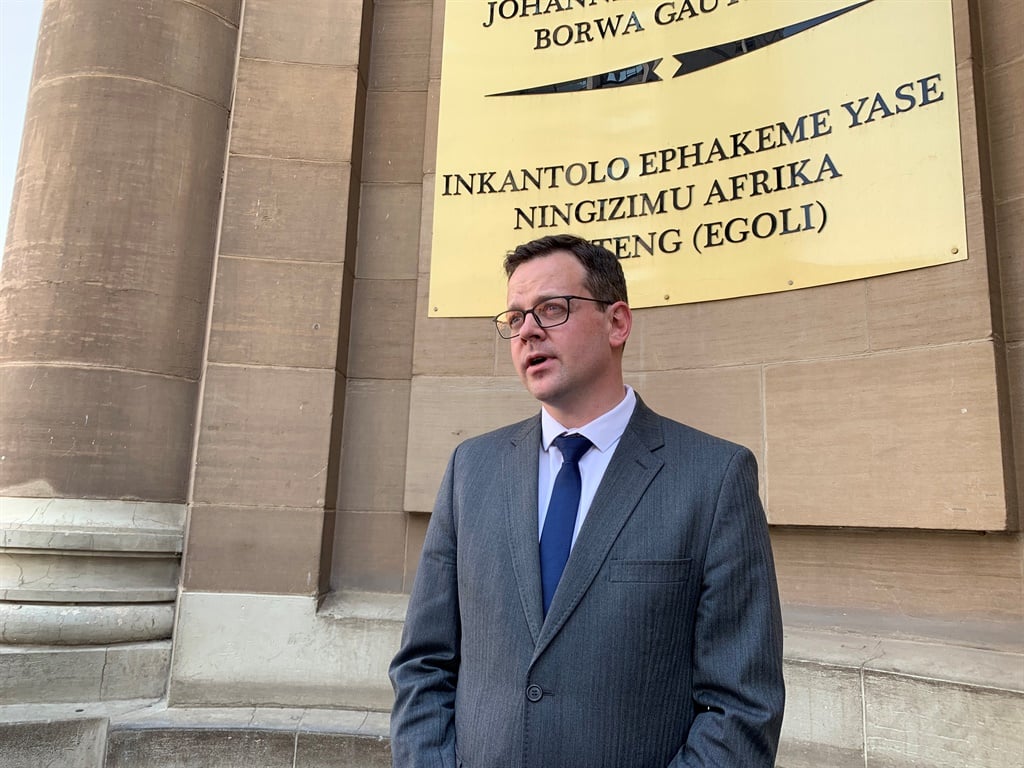 Afriforum's Ernst Roets speaking outside the Johannesburg High Court after judgement was handed down in the contempt of court case brought forward by the Nelson Mandela Foundation. Picture: Sthembiso Lebuso

The Johannesburg High Court has found that Afriforum’s deputy chief executive officer Ernst Roets was not in contempt of court when he tweeted a picture of the apartheid flag just hours after the Equality Court ruled that any gratuitous displays of the old flag amounted to hate speech on August 21.

Roets posted a picture of the old flag with the caption: “Did I just commit hate speech?”

The backlash was swift but Roets responded by saying that he only posted the picture for academic reasons.

“The judgment said the flag may be used for academic purposes. I am a scholar of constitutional law, currently doing my doctorate. This is an academic question,” Roets tweeted.

In his judgment on Tuesday morning, Judge Colin Lamont said that though he was of the view that Roets might in due course be found to have breached the provisions of the Equality Act, he was not in contempt of court.

Lamont said that the Equality Court’s ruling did not contain a directive prohibiting the display of the flag. “There is order ad factum praestandum,” he said.

The Nelson Mandela Foundation’s Luzuko Koti said they would study the judgment before deciding on the next step.

“We took this matter to the high court because we are committed to strengthening our democracy and our institutions, particularly our Constitution.

RT @Mbiizozo: The Nelson Mandela Foundation filed the application for Roets to be found in contempt of court. The foundation's spokesperson Luzuko Koti said that they accept Judge Colin Lamont's judgement.

“Part our democracy is our courts. Deputy Judge President Phineas Mojapelo ruled that if you are gratuitously flying the flag you are actually committing hate speech and on the same day someone tweeted the flag. We found that in contempt of court, flying the flag gratuitously in the face of South Africans,” Koti said.

A smiling Roets said that he was expecting the court to rule in his favour. “We would’ve been very concerned and surprised if the judge found that I have to be thrown in jail as the Nelson Mandela Foundation has argued,” Roets said.

RT @Mbiizozo: Roets says that they (Afriforum) were expecting the judgment.

"We would've been surprised and concerned if the judge found that I have to be thrown in jail as the Nelson Mandela foundation has argued"#Apartheidflag pic.twitter.com/yw5hsPaIY6

“We need to ask ourselves what sort of democracy we are trying to have in this country. If we are saying that it’s a democracy in which freedom is cherished and in which people can express their views even if we disagree, then this is certainly not initiative of the Nelson Mandela Foundation, they are 180 degrees in the wrong direction,” Roets said.

Roets said that they have already filed an appeal against the Equality Courts ruling that the gratuitous display of the flag amounted to hate speech.

“We will study this judgment and consult with our legal teams because there is a new set of circumstances currently and we will establish a way forward,” Roets said.

We can not subject our citizens to be loyal to two flags. They must be loyal to one flag, one Constitution, one election system and loyalty to one government

The ANC’s Dakota Legoete said that would study the judgment with the Nelson Mandela Foundation and decide on the way forward. “We think that matters related to racial bigotry and contradictions in relation to symbols are matters that are also civil and not only matters of the Equality Court,” Legoete said.

RT @Mbiizozo: The ANC's Dakota Legoete says that they note the judgment and they will go back and study it with the foundation.

Adds "We can't subject our citizens to be loyal to two flags. They must be loyal to one flag"#ApartheidFlag pic.twitter.com/mIbgQr5l2b

“You can’t go to Israel and fly the German swastika. Equally in South Africa you can’t fly the old apartheid flag in a new dispensation, where we have a new flag and Constitution. We can not subject our citizens to be loyal to two flags. They must be loyal to one flag, one Constitution, one election system and loyalty to one government,” Legoete said.

We live in a world where facts and fiction get blurred
In times of uncertainty you need journalism you can trust. For only R75 per month, you have access to a world of in-depth analyses, investigative journalism, top opinions and a range of features. Journalism strengthens democracy. Invest in the future today.
Subscribe to News24
Related Links
‘They are pleasing AfriForum’– Malema takes swipe at Hawks, NPA and ANC
Apartheid flag ‘promotes, propagates hatred against blacks’: Equality Court
Mbalula: AfriForum got Mkhwebane’s report wrong
Next on City Press
Employees and employers frustrated as Ters system ‘more down than operational’