The managing director of the company that won the contract to supply the Passenger Rail Agency of SA (Prasa) with its controversial Afro 4000 locomotives spent R27 million in cash on a flashy game farm and lodge in Limpopo five days after Prasa made its first payment to his company.

Auswell Mashaba, of Swifambo Rail Leasing, continued his property shopping trip after this and now owns R50 million’s worth.

Swifambo Rail Leasing’s sister company, Swifambo Rail Holdings, received its first payment of R460 million from Prasa in April 2013.Property records show how Zetacor Six, a company of which Mashaba is the only director, bought three pieces of land worth R27 million near Hoedspruit in Limpopo, five days after his company was paid. All three properties were paid for in cash.

The luxury AM Lodge, which according to its website charges guests up to R15 000 a night, is located on one of these properties.

Clear Bubbles Trading 100, a company of which Auswell and Joyce Mashaba
are directors, later paid R8.4 million in cash for a luxury guesthouse in Waterkloof, Pretoria.

Avraspark, another company Mashaba is the only director of, bought a fourth piece of land near Hoedspruit worth R3 million in February 2014.

In April 2014, Mashaba bought a fifth piece of land through Zetacor Six worth R12 million.

AM Lodge’s website states: “AM Lodge is a five-star private luxury game lodge unlike any other... AM Lodge houses a five-star, world-class luxury spa that is currently in the running for World Luxury Spa Awards 2016.” 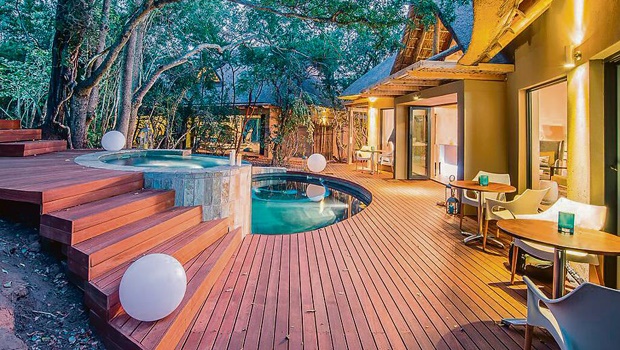 Auswell Mashaba’s lodge in Hoedspruit, Limpopo, which he purchased for R27m

Mashaba did not respond to Rapport’s questions regarding his properties.

His spokesperson, Vuyo Mkhize, says his client will meet with Rapport at a later stage to discuss these issues.

Prasa’s controversial train tender has been in the spotlight since July, when Rapport revealed the Afro 4000 locomotives were too high for some sections of the country’s railways.

Prasa submitted an application to the South Gauteng High Court in Johannesburg at the end of last month to set aside the contract.

Prasa board chairman Popo Molefe stated in the application that Swifambo Rail Leasing and Vossloh España appeared to have maintained
a “fronting relationship” and that the specifications in the tender process unlawfully benefited the Vossloh España’s locomotives. – Rapport