The ANC in Gauteng had called on the commission to give guidance, after the two leaders were elected by branches of the party to serve on the PEC, at a conference held in July.

City Press understands that the ANC in Gauteng is anticipating a tough time from voters at next year’s crucial general elections – specifically on the issues of corruption, e-tolls and the Life Esidimeni tragedy.

Mahlangu, who served as the MEC for health in Gauteng at the time of the Life Esidimeni disaster, has become the face of the tragedy, in which more than 100 mentally ill patients died in underequipped nongovernmental organisations scattered around the province.

The families of the victims staged a series of protests in the week which followed Mahlangu’s election to the PEC. 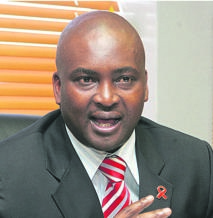 A PEC member told City Press that it would be difficult for the ANC to disregard the recommendation of the integrity commission, given that Life Esidimeni was an albatross around the neck of the party.

“You can imagine a situation where protests are being staged week in and week out while we are running an elections campaign. It is not a good look,” said the PEC member.

“We have owned up to this thing. We messed up on this one and the families have given us the space to deal with it, and this report will give us that finality.”

During the 2016 local government polls, support for the governing party dipped to 46%, and it also lost control of the capital city and the country’s economic hub.

With President Cyril Ramaphosa now at the helm, the ANC in Gauteng is in a race to make up for lost ground.

Hlongwa, who is the ANC’s chief whip in the Gauteng legislature, has been caught up in allegations of corruption, said to have taken place at the department of health during his tenure as the health MEC.

The third person whose conduct is being looked into by the integrity commission is disgraced former Emfuleni mayor Simon Mofokeng, who has been accused of sexually grooming a minor.

Mofokeng was removed as mayor by the ANC and replaced with now provincial secretary Jacob Khawe.

It is understood that Mofokeng would have been under consideration to go to Parliament before the sex scandal.

Khawe stopped short of calling on the three to resign in an interview with City Press in July, following his election.

“I must say, on a personal note, I always want people to use their political morality and revolutionary morality when they deal with these matters,” Khawe said at the time.

“I represent a notion where someone must look themselves in the mirror and ask: ‘Is this right?’, or even say: ‘But this is not good.’

“We all know that thing, we know right and wrong, but at times we hide behind justice, we hide behind process, but we will win that battle one day – and one day can happen now in our lifetime.”

The ANC’s Gauteng spokesperson, Tasneem Motara, confirmed that the matter of the three leaders was on the agenda for today’s PEC meeting.

“The integrity commission is going to present the report to us on Sunday, so we will see on Sunday and discuss it then. Possibly after that, we will release a statement on the outcomes on Sunday or Monday, depending on when we finish,” Motara said.

Related Links
Life Esidemeni, sexual harrassment and corruption: ANC's Fowler to reveal findings on Mahlangu,...
Mahlangu, Hlongwa and Mofokeng to appear before Gauteng ANC integrity commission
Mondli Makhanya: Blame Qedani and the branches, not just the ANC leadership
Share
Next on City Press
Hungry Zimbabweans are risking elephant attacks and being robbed by armed gangs to get food from SA

Read more on:
ancbrian hlongwaqedani mahlangu
MONEY MAKEOVER
Podcast | Mistakes to avoid with your own business