Not only are the preacher and his wife facing fraud and money-laundering charges, but their assets are also up for seizure

As controversial “prophet” Shepherd Bushiri and his wife Mary fight for their freedom, the state is already eyeing their assets.

The couple, who were arrested at their Sparkling Waters Hotel in Rustenburg on Friday, are expected to appear before the Specialised Commercial Crimes Court in Pretoria on Monday where they are expected to be formally charged and apply for bail.

But that will be just the beginning of their legal woes.

City Press learnt on Saturday that the Asset Forfeiture Unit (AFU), a branch of the National Prosecuting Authority (NPA), has joined the legal fight against the controversial couple and has filed a preservation order seeking to seize their assets, pending the finalisation of the criminal case against them.

Two sources familiar with developments said the AFU had already filed an application at the High Court in Pretoria, seeking its permission to seize the Bushiris’ luxury houses and cars, as well as the self-styled prophet’s Gulfstream private jet, which is parked in a private hangar at Lanseria Airport outside Johannesburg. Bushiri sits in the lounge area of the Sparkling Waters Hotel in Rustenburg, which he launched last year. He owns several properties .

Shepherd (35) – infamous for performing “miracles” at his church in Pretoria which some claim are staged – owns several properties in South Africa and others in his home country, Malawi, with his 37-year-old wife, Mary.

They also boast of owning a fleet of luxury cars, including a Maserati, a Rolls-Royce, an Aston Martin and a R3 million Mercedes G63 which Shepherd bought Mary for her birthday in 2017.

He also bought his daughter a Maserati in December 2017 as a gift for her sixth birthday.

But if the NPA gets its way, the Bushiris will no longer have access to their prized possessions.

“The preservation order may be granted next week,” said a source on Saturday.

Another source said the process had to move quickly because the authorities were concerned that Bushiri would start selling his assets to fund his and his wife’s defence, and hide their other assets from the state. Bushiri outside one of his luxury homes. Among the cars he owns are a Maserati, a Rolls-Royce, an Aston Martin and a Mercedes

City Press obtained an affidavit from the investigating officer in the case, a colonel from the Hawks’ serious organised crime unit.

It shows that the AFU investigators have identified the properties, cars and bank accounts which they have asked the High Court to preserve.

The affidavit – dated Thursday, and which was used to obtain the warrants for the couple’s arrest – states that they are alleged to have committed fraud and money laundering, and contravened the Prevention of Organised Crime Act, crimes allegedly committed since 2015.

The Bushiris regularly flit between South Africa and Malawi in their private jet.

“On November 20 2015, two payments were made and receipts issued,” the affidavit states. 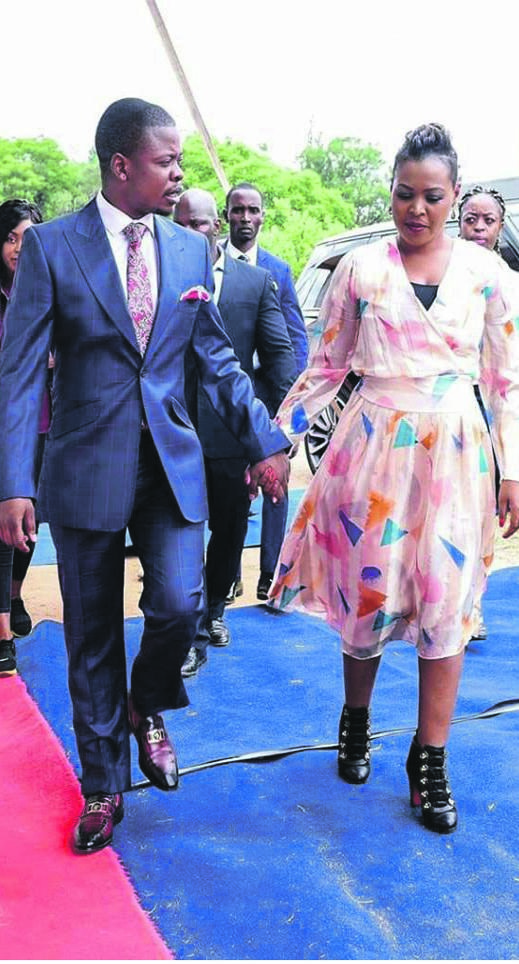 Shepherd and Mary Bushiri before their arrest on Friday. They would flit regularly to Malawi on their private jet

One receipt was issued on the same day to “Major Prophet Shepherd Bushiri” for the cash amount of $1 147 200.

A source told City Press that Mary travelled to the company’s Johannesburg offices with a bagful of cash.

Another receipt, issued by NAC on the same day – also to “Major Prophet Shepherd Bushiri” – was for the amount, in local currency, of R1 444 340, which made up the remainder of the payment for the aircraft.

But then the SA Reserve Bank got wind of the sale, and on May 8 last year emailed the Bushiris’ lawyers, asking them to provide the full details of how the aircraft was acquired.

About six weeks later, the Reserve Bank received an affidavit by Shepherd, in which he allegedly told the bank that he secured a $1.25 million loan to buy the aircraft from US aircraft supply and maintenance company Joint Aviation Resources (JAR).

Bushiri told the Reserve Bank that his church “repaid the funds in South Africa to JAR” and that the source of the funds were donations made to his “ministry”, the affidavit states.

Bushiri also allegedly told the central bank that “JAR will be in a position to provide proof that they were fully repaid”.

“Copies of the 24 payment receipts were attached to his statement,” the affidavit states.

But when his claims were investigated further and Reserve Bank officials asked for copies of the so-called prophet’s bank statements, they could not find that any such payments had been made.

In August last year, Hawks investigators approached JAR and obtained sworn affidavits which dispute that Bushiri was granted a loan by the company, and his allegedly fake loan agreement was disputed by company representatives.

“JAR, according to their knowledge, never received the payments as indicated on the receipts. Most importantly, JAR states that it was not authorised or permitted to do business as a loan agent or to issue business loans,” the affidavit states.

The affidavit also states that when Bushiri’s offices in Waterfall Office Park in Midrand were raided in May last year, police also found an undisclosed amount of foreign currency.

Popularly known as the “Major 1” by his followers, Shepherd once shocked them on Twitter and Facebook when he advertised the sale of tables at a gala dinner he was hosting, ranging in price from R1 000 to R25 000. Some of his followers say he charges money for a private prayer session, an allegation he denies.

Bushiri’s lawyer, Terrance Baloyi, did not respond to calls and a text message on Saturday.

We live in a world where facts and fiction get blurred
In times of uncertainty you need journalism you can trust. For 14 free days, you can have access to a world of in-depth analyses, investigative journalism, top opinions and a range of features. Journalism strengthens democracy. Invest in the future today. Thereafter you will be billed R75 per month. You can cancel anytime and if you cancel within 14 days you won't be billed.
Subscribe to News24
Related Links
He’s just my spiritual father, says Bushiri’s alleged mistress
More trouble for controversial Methodist pastor
Pastor, please stay out of my salary
Next on City Press
Ambassador to the US and her son in 'witchcraft and attempted murder' claims