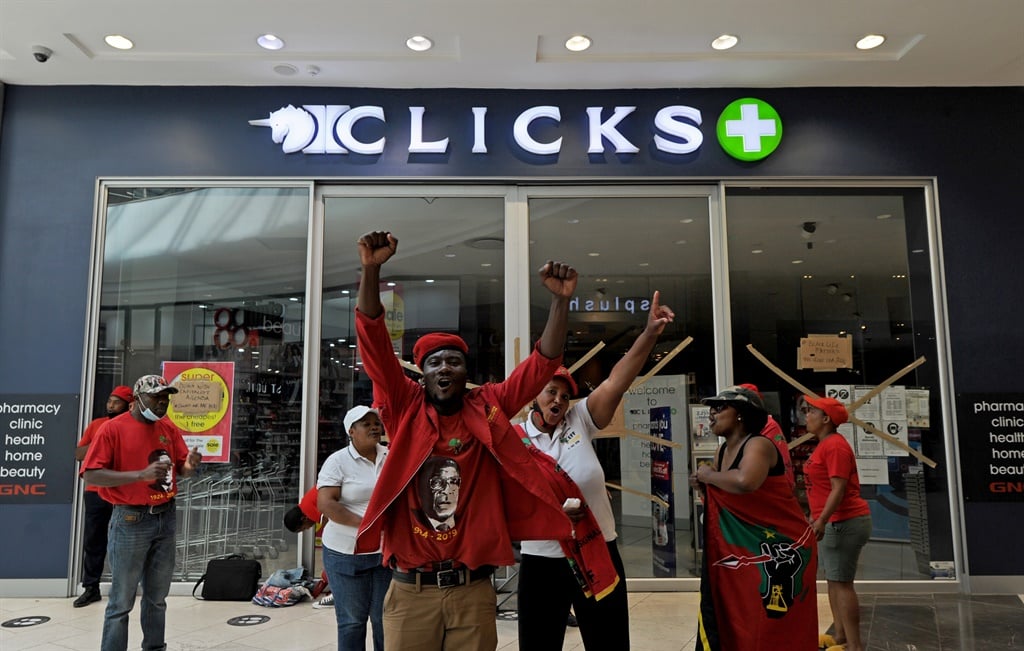 EFF members protesting outside the locked Clicks store at the Mall of Africa in Midrand. Picture: Tebogo Letsie/City Press

After the EFF this week vandalised some Clicks stores across the country and called for a nationwide boycott of the pharmacy chain after it disseminated a racist hair advert, the party and the franchise held discussions on Thursday to find a way for Clicks to make amends.

As a way to apologise for the TRESemmé advert, Clicks has committed to donating at least 50 000 sanitary pads and 50 000 hand sanitisers, and will create a scholarship for five black students to pursue qualifications in the pharmaceutical industry.

The EFF said Clicks would also remove all TRESemmé hair care products from its stores and replace them with ones produced locally.

READ: Herman Mashaba | The Clicks saga demonstrates the need for our silent majority to speak up

“Following the offensive and racist image that was issued by Clicks, the EFF held a meeting with Clicks regarding the racist advert that was posted on the Clicks website. The EFF and Clicks agreed that the advert is offensive and racist, and Clicks takes full responsibility for the advert distributed on its website. The EFF expressed disappointment to the way Clicks handled the matter in question,” said the EFF.

The party said that the five students who would benefit from the scholarship had to be young black African women who were orphaned because of HIV/Aids.

It also said that the EFF would work with law enforcement agencies to ensure that agent provocateurs involved in the vandalism of Clicks stores were brought to book.

We have agreed to hold further discussions on transformation within Clicks relating to procurement, empowerment, employment equity, localisation and diversification of supplier base
EFF

“The EFF and Clicks have put the matter in question to rest. We have agreed to hold further discussions on transformation within Clicks relating to procurement, empowerment, employment equity, localisation and diversification of supplier base. The EFF calls off all protest action at all Clicks stores with immediate effect. All Clicks stores can now resume normal operations,” said the party.

Before the meeting with Clicks, the EFF held a meeting with multinational goods company Unilever regarding the advert and asked it to make public the names of people responsible for the advert. EFF members protesting outside the locked Clicks store at the Mall of Africa in Midrand as the SAPS and heavily armed private security looks on. Picture: Tebogo Letsie/City Press

Unilever declined to divulge the names, but said that the director involved in the advert campaign had left the company and the country.

It also agreed to withdraw all TRESemmé products from all retail stores in South Africa for a period of 10 days to show its remorse for the offensive and racist advert.

“In addition, Unilever will donate a minimum of 10 000 sanitary towels and hand sanitisers to informal settlements identified by the EFF,” said the party.

The EFF said that it would also hold discussions with Unilever on transformation within the company.

READ: The EFF can no longer take its fight to Clicks’ doorsteps

The party said it had made it clear that the days of offering an apology and then moving on after a racist incident were over.

The SA Human Rights Commission said that it had launched its own investigation into the matter.

Commission spokesperson Gushwell Brooks said: “The commission has written a letter to and called for a meeting with Clicks for the retail store to explain itself concerning the content of the advert.

The commission has also noted an apology from Clicks’ group CEO, Vikesh Ramsunder, noting the company’s disappointment at this advert and the hurt caused by it. The commission remains committed to understanding measures taken by Clicks to guard against such adverts in the future, and other accountability and sensitivity measures the company intends to take going forward.”

We live in a world where facts and fiction get blurred
In times of uncertainty you need journalism you can trust. For only R75 per month, you have access to a world of in-depth analyses, investigative journalism, top opinions and a range of features. Journalism strengthens democracy. Invest in the future today.
Subscribe to News24
Related Links
Herman Mashaba | The Clicks saga demonstrates the need for our silent majority to speak up
The EFF can no longer take its fight to Clicks’ doorsteps
Mondli Makhanya | Gaddafi may’ve had a point about ineffective parliaments
Next on City Press
How vaccine roll-out got its boost