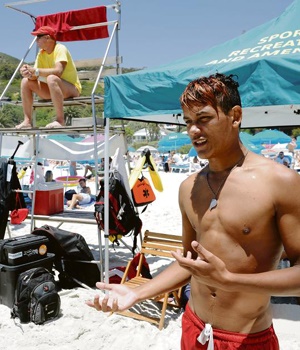 Thousands of happy locals and rich tourists flock to the beach during the holidays, where they are tended to by ice cream sellers and tanned lifeguards

He’s a seismic survey boat skipper by trade, but in summer Peter Cullen volunteers as a lifeguard on Cape Town’s Clifton 4th Beach – with its platinum real estate, granite boulders and translucent waves.

One of South Africa’s most affluent sea-facing suburbs, Clifton – with its four beaches flanked by multimillion-rand bungalows and glass apartment blocks – is known as a playground for the world’s rich and famous.

In summer, it becomes a small trading hub for megawealthy tourists and local business folk. On the beach, 500ml bottles of water, chocolate ice creams and granadilla lollies sell for R20 each.

Cullen is a fixture on Clifton 4th. Two days before City Press meets him, he pulled a drowning man from the sea.

“The man was on a stand-up board and fell off,” says Cullen. “He panicked, as the water was cold and he couldn’t swim. I raced to him through the water and reached him in time though, so fortunately we didn’t have to do CPR.”

Cullen (45), who grew up in Bloubergstrand, says life-saving is about reading patterns.

“You learn this over the years. For example, when people scatter and move away quickly, there is usually trouble.

“Also, you can tell which people are less comfortable in the sea, so you pay extra attention to those.”

Out of the waves, the cold water, ice creams and ice lollies are selling like hot cakes.

“It’s convenience,” says Allister Kemp (42), who has sold ice cream and cooldrink on the beach for the past 23 years.

“Basically, we offer room service – but on the beach. I mean, it’s plenty of logistics too – keeping the stuff cold and transporting it here.” Kemp lives in Heideveld, 22km away, with his five children and former wife. He drives to the coast every morning at 8am in a bakkie with five other people who hold city council permits to sell refreshments on the beach.

“My job is a pleasure. I can swim when I want to, rest when I want to. Sometimes my kids come to visit me on the beach – but on the really busy days, they can’t.”

In the winter, Kemp earns his living welding security gates.

Wiping sweat from his face as the mercury climbs, Kemp reaches for a tube of sunblock stowed in a moon bag strapped around his belly.

He points out regulars on the beach. “See that couple? They’re Dutch and have been coming here for 10 years. The friendliest people. The man is quite fat – always buying chocolate ice cream.”

Just the other day, Kemp found an Angolan woman’s white gold and diamond ring that she’d lost on the beach. The woman and her husband paid him a R1 000 reward, he says.

Further afield, Faizal Khan (56), a father of three from Mitchells Plain, reclines on a deck chair surveying the throng. He rents out up to 100 umbrellas a day at R30 each.

“I used to bring the umbrellas here every day in a bakkie my son brought me, carrying them up and down the steps to the beach. But from this year on, I have access to storage here, so that helps a lot,” he says.

Khan is one of about 40 people with city council permits who rent out beach furniture along the Atlantic Seaboard coastline. He starts in October and monitors the weather closely each day.

“Bryan is here often. Whenever he comes, he makes a big tent cave with his wife so no one can recognise them. They’re very private,” says De Kock.

Often, homeless people who sleep in the caves in the cliffs between the wealthy suburbs of Bantry Bay and Clifton help De Kock and Khan carry umbrellas in exchange for spare cash.

Down by the waves, Cullen is assisted by fellow lifeguard Peter John Holland (18). The two are perched on a storey-high steel construction looking out over the bustling sea, where they ensure people swim between two red flags.

Holland taught himself to swim in the public pool next to his family’s home in Bonteheuwel on the Cape Flats. He matriculated at Arcadia Secondary School and qualified at the Mnandi Lifesaving Club. He will join the army this month and hopes to offer swimming lessons on the side.

After a quick dip, Holland says he doesn’t do life-saving for the girls or the money.

“I love it. I used to be scared of sharks. But while training with the National Sea Rescue Institute a while ago, I was dropped out at sea for half an hour. Floating alone, I confronted these fears,” he says.

We live in a world where facts and fiction get blurred
In times of uncertainty you need journalism you can trust. For only R75 per month, you have access to a world of in-depth analyses, investigative journalism, top opinions and a range of features. Journalism strengthens democracy. Invest in the future today.
Subscribe to News24
Related Links
SA pulls in the tourists
Next on City Press
Tshitangano raises Eskom stakes