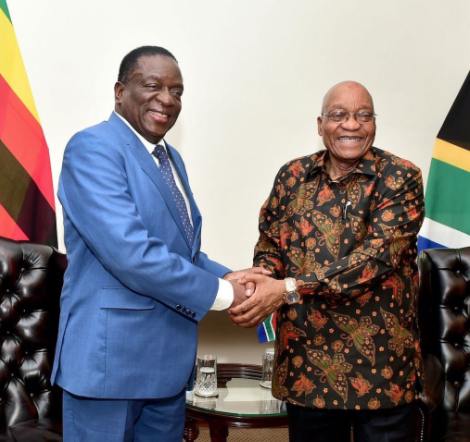 Mnangagwa is in South Africa on his first foreign trip since replacing Robert Mugabe as president.

President Jacob Zuma received a courtesy call from Mnangagwa at his Mahlamba Ndlopfu residence in Pretoria on Thursday, the presidency said in a statement.

Mnangagwa thanked Zuma for the warmth and hospitality provided to Zimbabweans living in South Africa, the presidency said.

He appealed to Zimbabweans to return home to put the skills that they have acquired in South Africa to great use in the rebuilding of the Zimbabwean economy and the development of their motherland.

“The two leaders share a warm history of having worked together while in exile in Mozambique, in their erstwhile responsibilities for intelligence and security services for the ANC and Zanu-PF respectively,” the presidency added.

Mnangagwa – who sought refuge in South Africa after being fired as deputy president last month – was hoping to stimulate his country’s flailing economy.

“The two Heads of State agreed on the need to strengthen economic cooperation and expand economic and trade relations between the two countries, and to make this a key feature of the South Africa-Zimbabwe Binational Commission agenda, in support of President Mnangagwa’s mission to revive the Zimbabwean economy which has been hit by sanctions and other challenges over many years,” the presidency added.

Mnangagwa also congratulated Zuma and the ANC on the successful national conference and “extended his good wishes to the new President of the ANC, Mr Cyril Ramaphosa who is also the Deputy President of the Republic”.

We live in a world where facts and fiction get blurred
In times of uncertainty you need journalism you can trust. For 14 free days, you can have access to a world of in-depth analyses, investigative journalism, top opinions and a range of features. Journalism strengthens democracy. Invest in the future today. Thereafter you will be billed R75 per month. You can cancel anytime and if you cancel within 14 days you won't be billed.
Subscribe to News24
Related Links
Mnangagwa heads to SA to woo Zuma, investors and kickstart Zim economy
‘It’s the end of Mugabe, but Mugabeism is still in place’
Malaysia, Kenya ... Mugabes flee following the former first family’s fall
Next on City Press
‘Use Enyobeni tavern tragedy to start conversations around alcohol with our children’ – psychologist