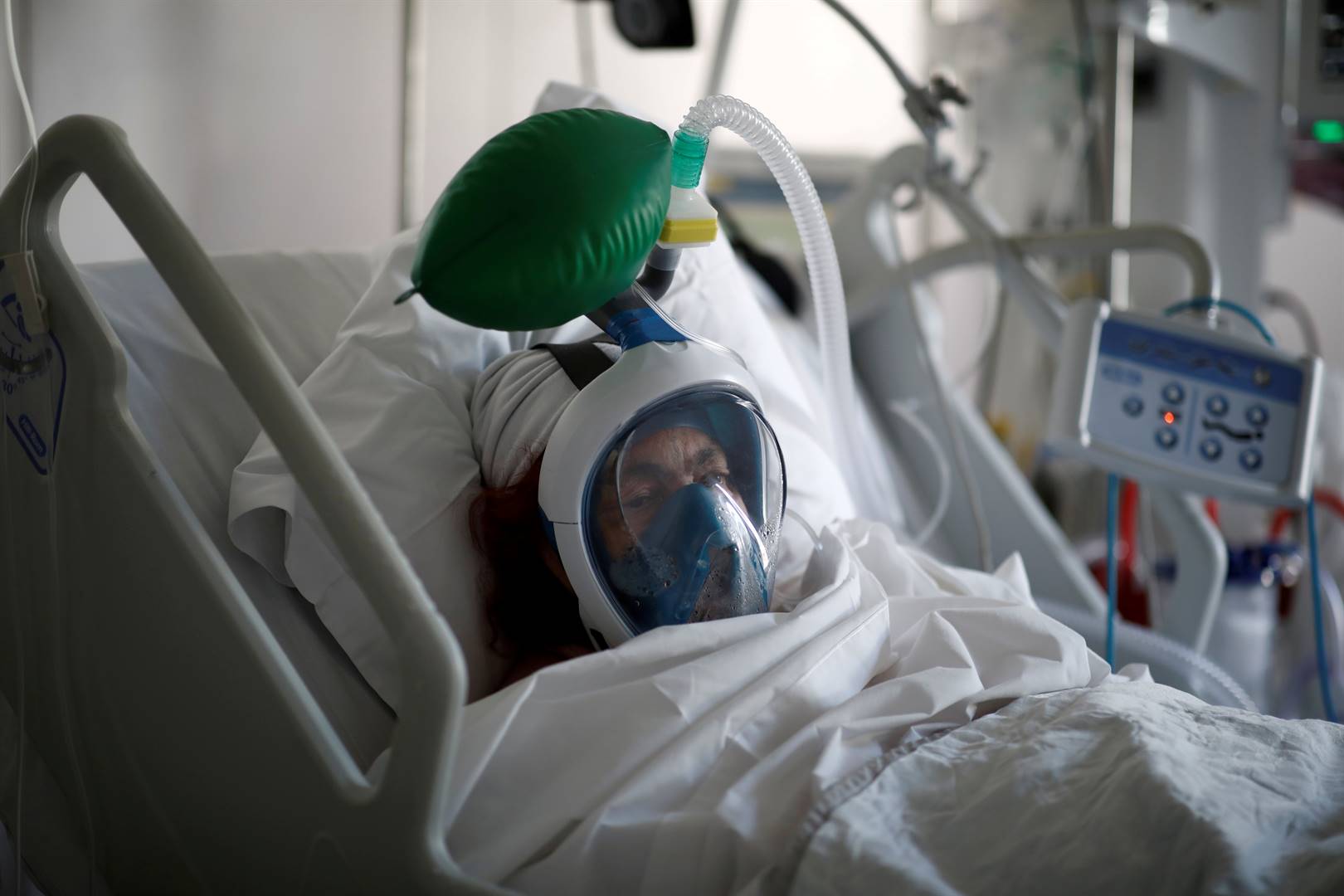 A patient suffering from Covid-19 wears a full-face Easybreath snorkelling mask given by sport chain Decathlon and turned into a ventilator for coronavirus treatment at the intensive care unit at Ambroise Pare clinic in Neuilly-sur-Seine near Paris. Picture: Benoit Tessier/Reuters

A key concern in the fight against the Covid-19 pandemic internationally has been a shortage of medical equipment, particularly ventilators. Elna Schütz asks whether we are sufficiently prepared in South Africa.

A key concern in the fight against the Covid-19 coronavirus pandemic internationally has been a shortage of medical equipment, particularly ventilators.

As the number of confirmed cases increases in South Africa, the private and public sectors are planning for the anticipated need, but it is still unclear whether we will have enough ventilators should the anticipated spike in cases come.

From the US struggling to increase ventilator production to Italy deploying the army to ramp up manufacturing, the global situation is a clear warning that South Africa will not be able to sidestep a similar crisis.

While most Covid-19 patients do not need hospitalisation, current estimates are that about 15% will have a severe form of the disease that needs some kind of oxygen therapy, and 5% will be critically ill, requiring mechanical ventilation.

It is unclear how many ventilators are available in the country currently.

Health Minister Zweli Mkhize has responded to questions about this by saying that they “are dealing with the situation as it stands now” and do not want future projections to create miscommunication or panic.

Mkhize said “right now they are adequate”, referring to the number of ventilators in the public and private sector.

Gauteng MEC for Health Bandile Masuku added that while he is confident that there are enough resources to flatten the curve, “ventilators will be a problem”.

He put this down to South Africa’s economy being traditionally dependent on medical equipment imports.

However, Masuku also mentioned that they have discovered ventilators in some hospital store rooms that have been bought years ago and not previously used.

The responses in the private healthcare sector are similarly guarded and focused on increasing capacity ahead of time.

Chief clinical officer of Mediclinic Southern Africa, Dr Stefan Smuts, said that they recognise the international challenges with ventilator shortages and that “ongoing collaboration with new and existing networks seeks to review the expansion of this capacity”.

Group medical director of Netcare, Dr Anchen Laubscher, said that they have in the past had enough respiratory equipment and have “substantial ventilator capacity”.

The group said it has a “frequently rehearsed disaster management plan” and Covid-19 task team in place that is assessing equipment needs on an ongoing basis.

Dr Charl van Loggerenberg, the general manager of Emergency Medicine at Life Healthcare, also confirmed that they have had enough capacity in the past and said it has not previously been necessary for their around 1 000 adult Intensive Care Unit (ICU) beds to all have ventilators.

He did say that “additional equipment has been ordered as part of our procurement processes during this time”.

Several companies that supply medical ventilation equipment to individuals and healthcare professionals confirmed that there has been a drastic increase in requests recently.

This is primarily by professional groups, but Shameer Jamaloodeen from Medhold, a medical device supplier to healthcare groups, added that “non-medical personnel have been in contact from SA and all other parts of the world for supply of ventilators due to the Covid-19 pandemic”.

While ventilators are only one part of the larger medical response to Covid-19, they are crucial as they mechanically inflate a person’s lungs when their body is unable to do so by itself.

An expert from the Critical Care Society of South Africa (CCSSA) explained that in severe cases of the disease “in some patients, both lungs become inflamed and increasingly stiff” and breathing needs to be mechanically supported.

The exact number of ventilators in the country may not be clear, but the need for increased capacity is evident.

According to the CCSSA a ventilator is adjustable in terms of various parameters such as “the breathing rate, the oxygen levels, and the amount of pressure”.

This means it is not just the number of machines that is important, but the availability of support including trained staff, availability of fresh gas outlet points, and other equipment to manage the patient.

The number of ventilators needed also depends on how long a patient needs one.

Specialist anaesthesiologist, Dr Adrian Wentzel, said that “the duration of ventilation is dependent on the severity of the clinical presentation but generally is counted in weeks rather than days”.

While ventilators are critical in helping severely ill patients, the mortality rate for ventilated patients is unfortunately very high.

Wentzel said that “even with the best strategies in place” about half of people who need ventilator support die, and this can be higher than 80% in “an elderly or compromised population”.

The exact number of ventilators in the country may not be clear, but the need for increased capacity is evident.

Trade and Industry Minister Ebrahim Patel confirmed that the department is fast-tracking the import of critical equipment and that the implementation of a state of disaster has allowed for an exemption to the Competition Act, so that hospitals are able to share equipment and personnel if needed.

Mkhize said they were focusing on forward planning for the making of ventilators since “we can’t start saying ‘please go manufacture them’ when we run into a problem”.

Various companies in the country are working on manufacturing foreign designed products here or developing new ones.

Several of these initiatives include the cooperation of industries that do not usually produce medical equipment, such as the automotive sector.

For instance, Volkswagen South Africa said it is “using 3-D printing technology to produce parts for a mechanical ventilator which will be produced at our factory in Uitenhage”.

This is part of the efforts of a National Government Task Force team working on the issue and will be based on a design from Spain.

Before the car manufacturer can start mass production, they must obtain legal clearance to do so, which is currently ongoing.

Registering the import or manufacture of a ventilator usually takes up to eight weeks but is currently fast-tracked to a turnaround time of under one week.

Andrea Julsing Keyter, the deputy director of medical devices at the South African Health Products Regulatory Authority (SAHPRA), said they were currently keeping up with applications.

If a design is already internationally approved, it can usually be accepted by SAHPRA, but if this is not the case with a new product or design, a more complicated expert evaluation would be necessary.

Julsing said that “this would be the first time for us actually doing a full review on a piece of equipment, so I can’t pronounce on the exact timeline but we would expedite as much as we can”.

Ventilators also count as higher risk devices, which is determined by the invasiveness and duration of use of a product.

An applicant for registration must prove that their product is fulfilling various criteria in terms of safety and performance.

Julsing said this remains central, “because while it’s critical that we up the supply, it’s important that the right product is made available”.

An unclear crisis in the making

While the number of confirmed Covid-19 cases in the last week have risen more slowly than some expected, Mkhize warned that “we may be currently experiencing the calm before a heavy and devastating storm”.

A shortage of ventilators is not yet the reality in South Africa and the exact scope of the country’s current capacity isn’t clear.

But, international trends and the challenges in increasing local supply suggest that the risk of future shortages is substantial.

Fortunately, indications are that both government and the private sector are taking this risk seriously.