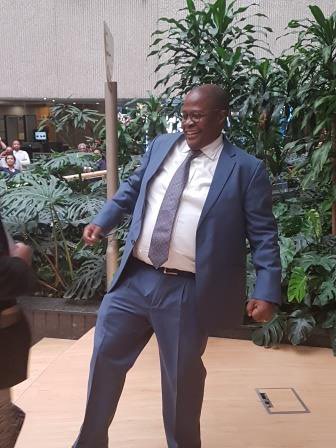 Brian Molefe reported for work bright and early at Eskom’s Megawatt Park in Sunninghill this morning.

“The Eskom spokesperson eventually told us that Molefe had already arrived at the offices before we had arrived, and we were there from 7.30am,” said the Democratic Alliance’s Natasha Mazonne, who was protesting with other DA and Cope members outside the office this morning in protest against the reinstatement of Molefe as Eskom chief executive.

The peaceful protest was met with a substantial amount of police presence.

Cope spokesperson Dennis Bloem said that members of Cope “were stopped several times on their way to Sunninghill”.

Bloem said that the police presence outside the Megawatt Park offices was “full out to disrupt our blocking of the gates at Eskom”.

“We were also reliably informed that Mr Brian Molefe was given VIP protection for him to sneak into the Eskom premises. We were also informed that he arrived at the office around 5am to avoid our blockade,” Bloem said.

As the protesters continued to picket outside the offices, passersby hooted in support of the protest, and some even stopped to join in.

“There was really such a great feeling of unity with people joining in, and some even offered to buy us coffee as we waited in the cold,” Mazonne said.

The DA filed papers at the North Gauteng High Court this morning in a bid to stop the appointment of Molefe.

“We are saying that Molefe is unfit to hold office of the chief executive, and it is improper for him to do so. He should not be allowed to do so,” she said.

Molefe, who had resigned last year under the reasoning of “good corporate governance” and subsequently took up a position as parliamentary MP for three months, returned to Eskom after failing to become the country’s next finance minister.

National chairperson of the Congress of the People, Pakes Dikgetsi, told City Press that they were opposed to the reappointment of Molefe.

“Cope is opposed to the decision by the Eskom board and the Minister of Public Enterprises Lynne Brown to have Molefe back. We should be protecting Eskom as a public asset, and Molefe and the Guptas operate in dark corners,” Dikgetsi said.

Dikgetsi said that this was just the beginning and the aim was to “mobilise South Africans to draw public attention”.

The DA’s James Selfe confirmed that the party had filed an urgent two-part application with the high court and it had been served on Molefe.

“The first part of our urgent application seeks to interdict Brian Molefe from performing any duties or functions as Group Chief Executive at Eskom as well as to prevent him from receiving any benefits associated with the position,” Selfe said.

“The second part requests that the court review and set aside the reappointment of Molefe as chief executive of Eskom because we believe this reappointment to be irrational.”

Molefe was implicated in the Public Protector’s state capture report last year for his close links to the Gupta family.

Meanwhile a woman who spoke on behalf of the Eskom media desk said the following when City Press asked for confirmation about Molefe’s early arrival and schedule for the day: “I don’t understand guys, he came in early and it’s a normal working day for him. He’s just one of those guys who comes in early,” she said, withholding her name.

Read more on:
copedaeskombrian molefe
ON MY RADAR
for subscribers
On My Radar | Take care as you step into the metaverse