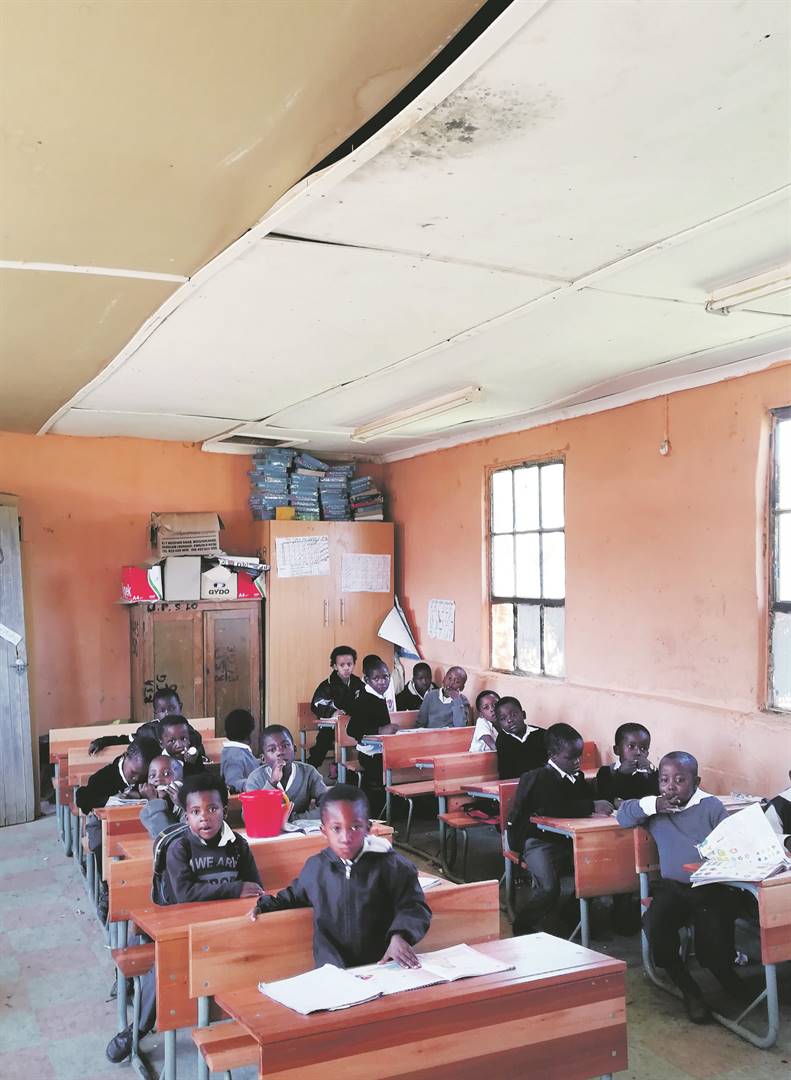 Walls of a Grade 1 classroom at Upper Mvenyane school are held together by wire to prevent collapse. A classroom fell apart in January. Picture: Lubabalo Ngcukana/City Press

Despite numerous pleas to the education department, the 224 pupils at Upper Mvenyane Senior Primary School have no proper toilets, classrooms or even water supply.

The school, in the Eastern Cape town of Cedarville, near Matatiele, was built by residents in the early 1960s, with each household donating at least 10 bricks and one corrugated zinc sheet.

The only thing that the provincial education department contributed was the desks, sent to the school earlier this year.

Its pit latrines were also built by the community after repeated pleas to the department for decades were ignored.

Unsuitable and dangerous for the children, the seats are larger than the one in which Lumka Mkhethwa (5) fell through and drowned at Luna Junior Secondary School in Bizana last year.

Priscilla Dlangamandla, the principal of Mvenyane, said the community built the school with their “bare hands” and, over the years, replaced the mud structures with cement bricks when they fell apart.

“When one of the buildings collapsed in about 2005, the department came to inspect the school, promising to build us some structures,” she said.

“But they have never returned to fulfil their promise.”

Now, water leaks through the classroom roofs. Strong winds recently blew away one of these roofs and caused another classroom to collapse completely.

“No one is safe under these conditions,” Dlangamandla said.

“All we need are just two blocks of classrooms and toilets. Those are just the basic needs and necessities to run a school. We do not want anything extravagant. But nothing has happened, despite many attempts to ask for intervention from the department.

“The department has been making promises to build the school, but we have not seen any progress.” The walls of a Grade 1 classroom in Upper Mvenyane is held together by wires to avoid its collapse posing serious danger to learners and teachers. A similar dilapidated classroom collapsed in January. Picture: Lubabalo Ngcukana

Dlangamandla said she constantly worries that one of the younger children could drown in one of the school’s pit latrines.

The school’s only source of water is from tanks, which were donated – and when those run dry, children have to collect water from nearby springs.

When City Press visited the school last week, we found the Grade 1 classroom walls so severely cracked that the pieces were strung together by wire.

Another classroom had no door. Ceiling boards were ruined by rainwater, and large bricks were placed on roofs to prevent them from being blown away.

The school has no administration block or staffroom, and the principal uses a small building built by the community as an office.

There is no library, let alone a computer or science laboratory. Parents have to hire their own private transport for children who live far away because the department does not supply this.

Dlangamandla said the school used most of the R74 000 grant it received each year from the department to prevent the school from completely falling apart.

Two weeks ago, Eastern Cape finance MEC Oscar Mabuyane said in his budget speech that the province’s education department would get the biggest slice of his budget.

Out of R82.2 billion budget, education would receive R36.3 billion.

Mabuyane also announced that an additional R1.36 billion would be allocated to fixing school infrastructure, such as eradicating mud schools and building proper toilets. But last year, provincial education spokesperson Malibongwe Mtima said the department needed at least R62 billion to eradicate mud and improper schools in the province, and R2.6 billion to build proper toilets in the 1 598 schools across the province that do not have them.

In August last year, President Cyril Ramaphosa launched the Sanitation Appropriate for Education initiative, which seeks to provide every school in the country with proper toilets.

Noxolo Lugageni, chairperson of the school governing body at Upper Mvenyane Senior Primary School, said what concerned them most at the school was its toilets.

“After all the accidents we have heard in the news, telling of children drowning in pit latrines, we are just crossing our fingers that it does not happen in our school.

“We have been pleading with the education department for assistance in building at least the toilets – to no avail,” Lugageni said.

“If it was not for the community and other donors, these learners and teachers would be using the bush to relieve themselves, and children would be learning under trees.”

Lugageni said they were previously informed by the department that the school was on a priority list, but nothing had come of that.

“Submission for water and sanitation has been made to those responsible for infrastructure at the department’s head office. We are waiting for the new financial year for assistance,” he said.

Mtima said the school would merge with nearby Magxeni Senior Primary School in terms of the Circuit School Landscape Plan 2020, which centres on merging smaller schools with others to maximise resources.

However, Lugageni said they knew nothing about these plans. “We are hearing this for the first time. We are not aware of any merger – because for that to happen, it must have the buy-in of the community. The community has not been informed of such.

“In any case, the school they want to merge us with has fewer learners than us, and has no space to build classrooms and sporting fields, whereas we do. So, where is the sense in that?”

What do you think it will take for the provincial education department to heed school governing body warnings? Do you think the 2019 amount budgeted for fixing school infrastructure is sufficient?

SMS us on 35697 using the keyword SCHOOL and tell us what you think. Please include your name and province. SMSes cost R1.50. By participating, you agree to receive occasional marketing material

We live in a world where facts and fiction get blurred
In times of uncertainty you need journalism you can trust. For 14 free days, you can have access to a world of in-depth analyses, investigative journalism, top opinions and a range of features. Journalism strengthens democracy. Invest in the future today. Thereafter you will be billed R75 per month. You can cancel anytime and if you cancel within 14 days you won't be billed.
Subscribe to News24
Related Links
Huge cost of pit toilets for school investigated after City Press exposé
Education department provides toilets, but the wrong ones
Up to 100 pupils crammed into single classroom in Eastern Cape
Next on City Press
‘Use Enyobeni tavern tragedy to start conversations around alcohol with our children’ – psychologist