Union rivalry is at the centre of a row at the SA Council for Educators (Sace), which suspended 22 of its officials last week.

Thobile Ntola, general secretary of the new SA Liberated Public Sector Workers’ Union (Salipswu), claims the officials were suspended because they are members of his union.

Ntola, a former leader of Sadtu, was expelled in 2014 for allowing Saftu leader Zwelinzima Vavi to address a Sadtu gathering in Port Elizabeth.

The Sace council is dominated by representatives of Sadtu and another Cosatu affiliate, the National Education, Health and Allied Workers’ Union.

Ntola claims the suspension of his members at Sace was aimed at frustrating his union and said they were suspended for asking questions about corruption and mismanagement.

In an internal memo to staff dated January 31, Sace chief executive officer (CEO) Ella Mokgalane announced there would be an investigation into the conduct of the suspended officials during a protest on January 29.

Mokgalane said Sace met Salipswu on January 29 to finalise awarding organisational rights to the union after a ruling by the Commission for Conciliation, Mediation and Arbitration in November, which ordered that a recognition agreement be concluded in 21 days.

In the email Mokgalane alleges that on January 29 Salipswu representatives “proceeded into the premises and disrupted the normal business activities of various employees of Sace”.

Then, she wrote, other Sace employees, believed to be Salipswu members, joined in the protest “and marched through the Sace premises causing enormous disruption and disturbance”.

“The employees and union representatives then proceeded to the office of the CEO and other executive management and committed serious acts of intimidation,” she said.

Insiders told City Press that the suspended officials were responsible for verifying teachers’ qualifications and checking for criminal records before they were placed at schools.

And, without them, they said, sexual offenders could slip through the system. But Sace spokesperson Themba Ndhlovu denied this.

“While acknowledging that their absence has had an effect, all the Sace processes are proceeding smoothly,” he said.

Ndhlovu denied Sace was being used by Cosatu affiliates to settle political scores, saying Sace was constituted by different unions, including those not affiliated to Cosatu.

He said the suspended officials violated their employment conditions by participating in an illegal protest. 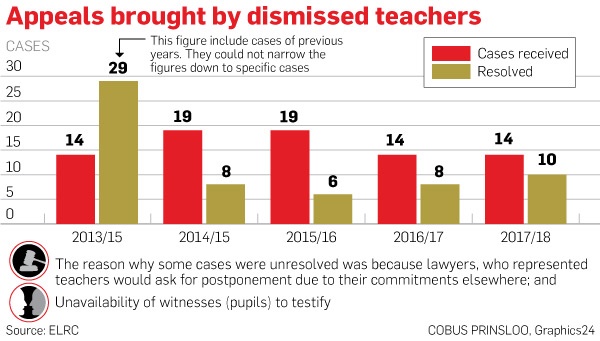 Do you know of instances when union rivalries have affected service delivery?

SMS us on 35697 using the keyword TEACHERS and tell us what you think. Please include your name and province. SMSes cost R1.50. By participating, you agree to receive occasional marketing material

We live in a world where facts and fiction get blurred
In times of uncertainty you need journalism you can trust. For 14 free days, you can have access to a world of in-depth analyses, investigative journalism, top opinions and a range of features. Journalism strengthens democracy. Invest in the future today. Thereafter you will be billed R75 per month. You can cancel anytime and if you cancel within 14 days you won't be billed.
Subscribe to News24
Related Links
Jobs-for-pals scandal rocks council for educators
Lesufi: Matric results show township education has turned the corner
Teachers behaving badly
Next on City Press
Marikana workers plan to put Ramaphosa in the dock in a civil claim