Fort Hare suspends lectures after protests over lack of accommodation 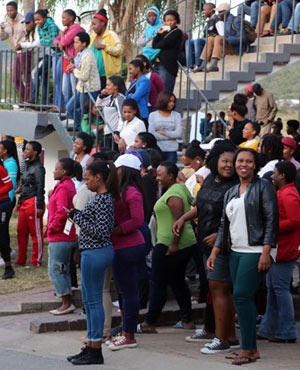 It’s been three weeks of fighting, squatting, and no lectures at the East London campus of the University of Fort Hare, as students protest in support of hundreds of students who have no accommodation.

“We are tired and actually want to begin the academic calendar to finish our studies but we can’t be squatting and sleeping on chairs and be expected to perform well. During mass meetings, few students said they want to go back to school, those are the ones who have accommodation, but we continue preaching the message of unity to this issue that affects a majority of us.”

The protests began on February 4, the day before lectures were set to begin.

“The SRC has proposed the addition of beds in the residences and the readmission of senior students who previously were in residences last year because no reason was given as to why returning students who qualify were not allocated a residence,” the campus’s SRC president Premier Kwanele Ntantala told City Press.

Ntantala added that engagements with the university management were not fruitful.

“The history of our engagements stems from last year where we got a written commitment from management to procure a building, but when this year came and we understood that procuring a building would take a while, we then asked management to get temporary housing for students that would charge the same amount as the university residences. But since last week the university has become dismissive and arrogant and told us school will resume Friday and we asked where these 300 plus students who are homeless will go?”

Ntantala believes the university is acting in bad faith.

“They claim that they do not have funds to purchase another building or a temporary housing.”

Mamkeli told City Press that “university management is refusing to engage with the SRC and in doing have shown a lack of respect and regard for students who are represented by the council”.

Final year law student, Sesethu Matyumza, told City Press that she is in full support of the protest.

“This is long overdue and although I am not directly affected by the accommodation issue, I do see the value in us continuing to protest because, should we stop, students who are homeless will not receive any assistance. We need management to do something about it.”

Siphesihle Mdebuka (22), a first-year social work student from Queenstown, said she was squatting with a friend at one of the residences on campus while she waits for accommodation.

“I am in full support of the protest because I too am homeless. It is challenging because you risk getting in trouble with the landlord and the security plus the person you squat with sometimes needs their privacy, so it’s not nice”.

The university has since sent an email instructing staff members to work from home and gave notice of the suspension of lectures until another communiqué expected on Friday.

We live in a world where facts and fiction get blurred
In times of uncertainty you need journalism you can trust. For 14 free days, you can have access to a world of in-depth analyses, investigative journalism, top opinions and a range of features. Journalism strengthens democracy. Invest in the future today. Thereafter you will be billed R75 per month. You can cancel anytime and if you cancel within 14 days you won't be billed.
Subscribe to News24
Related Links
Dumisa Ntsebeza appointed as new Fort Hare chancellor
Next on City Press
Ambassador to the US and her son in 'witchcraft and attempted murder' claims