From Mmusi to Mugabe, from xenophobia to SA talent: In City Press this week 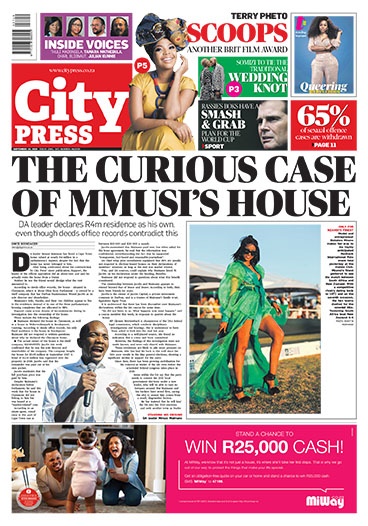 City Press is jam packed with news, entertainment and analysis this week. Here is what you can expect in your copy today.

The curious case of Mmusi’s house

DA leader declares R4 million property as his own, but deeds office records say it is owned by a shelf company

The party is involved in a delicate balancing act to quell the violence that has gripped the country - and to find an alternative narrative to explain it.

‘I do, I do’ for Somgaga and Mohale

Mzansi’s beloved gay couple will tie the knot in a traditional wedding ceremony south of Joburg, two years after they met in Sandton.

Why did Maite reinstate suspect officials?

Corruption Watch has launched a blistering attack on Minister Maite Nkoana-Mashabane, accusing her of ‘abusing  and weaponising’ disciplinary processes to facilitate corruption.

Have no fear, you cannot lose, you’ve gained so much already - you will come out stronger. That’s the message to the South African act wowing the US.

SA is ‘haunted’ by fear of criminals

This week’s statistics show a disturbing increase in most crimes, with murders and sexual offences surging in the poverty-stricken Eastern Cape.

‘Mugabe was tormented in his last days’

A former Zimbabwean minister and a relative of Robert Mugabe’s has given a harrowing account of the former president’s last days spent in self-imposed exile in Singapore.

As someone who overcame adversity, Dakalo Muavha is giving back to his village and the country after recently opening Mpumalanga’s first private urogynaecology unit.