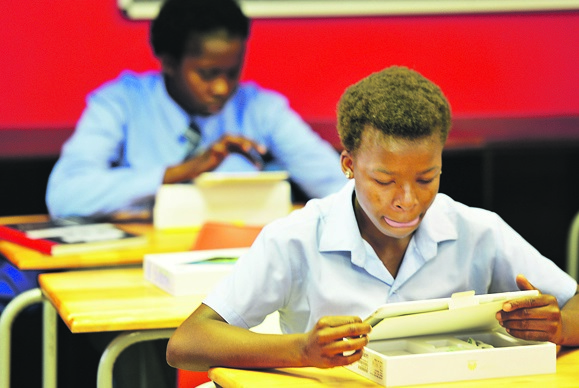 Missing in action Almost 10 000 tablets issued to pupils in schools in Gauteng last year were not returned. Some were stolen and some were sold by pupils PHOTO: Leon Sadiki

As scores of tablets meant for high school pupils in South Africa pop up in foreign countries, Gauteng Education MEC Panyaza Lesufi says social issues are to blame for the losses.

An international tracking company contracted by the Gauteng education department has managed to locate some of the unreturned or stolen tablets belonging to Gauteng pupils, which were smuggled out of the country and shipped as far away as Pakistan and India.

In an interview with City Press this week on the progress of his pioneering paperless classroom project in the province, Lesufi expressed shock and dismay at a report from the tracking company, which showed that some of the tablets had found their way to other provinces in South Africa and to other countries.

The tablets were either stolen from pupils, sold or pawned by pupils on the black market, or offered as collateral to secure loans – often leaving schoolchildren without essential learning tools.

Lesufi, who spearheaded the country’s first information and communication technology (ICT) project in schools in Gauteng, was at pains to explain how the groundbreaking initiative had been frustrated by social ills in the country.

He said that, although the initiative had placed the country ahead of other developing countries, some of which were still using projectors in classrooms instead of smart boards, his department was forced to suspend the introduction of tablets to pupils in Grade 11 and go back to the drawing board. Currently, only Grade 12 pupils are issued with tablets.

“It’s like I hit a speed hump. Let me be honest, it discourages me. It hurts me,” Lesufi said, adding that the department decided to hold off on issuing tablets to lower grades because it did not want people to say it had “wasted state money”.

“I can just see that they are not ready. We had to suspend it,” he lamented.

Government has spent R493.5 million this financial year alone on ICT for schools in Gauteng. Last year, 82 000 tablets were issued to Grade 12 pupils as part of the pilot project, but 9 865 were not returned. On average, a tablet costs R2 000.

Lesufi said he recently visited a matric pupil in Tembisa Hospital who was shot and left for dead by a thug who robbed the youngster of his tablet.

“You have societal issues where criminals feel this is a free jackpot … I really believe that society must understand that this investment could help pupils become creative and innovative, and help them create jobs in South Africa in the near future,” he said.

He also urged society to guard against being selfish, saying communities needed to protect pupils from criminals because tablets were valuable assets.

Lesufi cited cases where he witnessed pupils carrying tablets on their way to football stadiums at the weekend, as well as instances where the youngsters downloaded their favourite television series or movies, thereby improperly using the devices and government-funded internet data that was only meant to be used for educational purposes.

The introduction of the tablets was implemented with the aim of getting to a point where exams could be paperless, resulting in scripts being marked faster and results being made available immediately.

It was envisaged that the technology would also enable pupils to identify where they went wrong in their studies, and quickly refer them to the relevant chapter in the curriculum and make it easier to grasp difficult concepts.

Pupils in township schools had also managed to score high marks in maths, science and accounting because of the introduction of the tablets, he said.

“Indeed, there are those who embraced this change and started to fly with it, but if you have almost 15 000 pupils misbehaving with this [device], it hits the pocket big time. It’s not yielding the desired outcome in certain areas,” he said.

Ever the optimist, Lesufi said he believed that not all was lost. He remained encouraged by the positive effect the ICT project has had in township schools and attributed last year’s improved matric results in the province to the project. Of 32 schools that recorded a 100% matric pass rate last year, eight were based in townships where the project had been introduced.

Lesufi also admitted that learning to use smart boards had been a challenge for some teachers, but that they had since improved their abilities.

He also said there was a multimillion-rand initiative on the cards aimed at benefiting pupils in “well-resourced” schools.

“We are creating cloud storage so parents can follow a pupil. If the children are taught photosynthesis this week, we can stream lessons because they are sometimes recorded. You can follow a pupil to find out if he or she is performing well.

“But we are still building that cloud. Our intention is to give tablets to pupils in poor areas, while, in rich areas, they would buy their own gadgets and connect to the same cloud,” Lesufi said.

He said he believed that the Gauteng experience had provided the perfect case study for the country on how to go about modernising education.