Have you the courage to hear my story? Ayouba El Hamri, a representative from one of the 111 countries at the first Global Feminist LBQ Conference held in Cape Town recently Pictures: Lesedi Mogoatlhe

Growing up around her grandparents in Durban, 33-year-old Thuli Mjwara’s daughter has been socialised in a heteronormative way of life yet she is constantly asking questions as many young children do. “Recently, my daughter asked me why I would not marry her father – most of her friends come from families where the parents are married to heterosexual partners,” said Mjwara, the process coordinator for Inclusive and Affirming Ministries.

Mjwara is an openly bisexual mother to an 11-year-old daughter. She was part of the first Global Feminist LBQ Conference held in Cape Town early this month.

Mjwara said she emphasised to her daughter the importance of respecting others and that being different doesn’t mean that you are not normal.

These words resonated with many in the room, judging by the cheering and nodding heads.

While attendees were academics, activists, artists and spokespeople of queer and feminist groups from 111 countries, there was a clear drive for self-introspection and to be critical of the exclusionary possibilities of the space.

Language justice, accessibility and the safety of trans, non-binary and gender non-conforming folks present were some of the raised critiques.

In response, a group of attendees voiced their grievances which were received openly by facilitators.

“We’ve never had this conversation in this way before and [we] have managed to bring together representatives from more than half of the world’s countries to do this,” said Rima Athar, an academic and activist, who was part of the conference’s working team.

Triangle Project, a lesbian-led human rights organisation in South Africa - hosted the conference, bringing together all these queer feminist voices.

The yearning to listen and be heard was ignited from day one.

There was also a profusion of histories, analyses and passions shared, bringing to life the idea of leading, healing and transforming – the key themes that fuelled more than 50 panels and workshops. There’s no such thing as a one path narrative, more so for those at the fringes of mainstream society.

There are queer mothers raising a socially aware generation, they are raising children to be conscious of others’ humanity, a necessity wouldn’t you agree?

A queer visibility movement outside of heteronormativity is growing every day. “My activism starts with my family,” said one delegate.

Many more acknowledged that our struggles are multiple.

“I’d like to see more visibility, the more we are seen the more opportunities there are for gaining acknowledgment and understanding,” said Gulum Peterson, a transgender and a sex worker from Cape Town.

“I wish broader society knew that I am made of love, created through love and that I deserve to be humanised,” she said with a high level of openness.

Also discussed at the conference were trans identity and sex work with regards to sexual health and imagining our identities outside of colonial systems.

“It’s time our country realises that we are human beings,” Peterson said. “There needs to be more tolerance, affirmation and acceptance.”

The debate on the decriminalising of sex work has been echoing in South Africa’s human rights and gender-based violence hallways, as part of an on-going worldwide debate.

Peterson said discrimination was rife and the police were still not helping the trans sex workers. 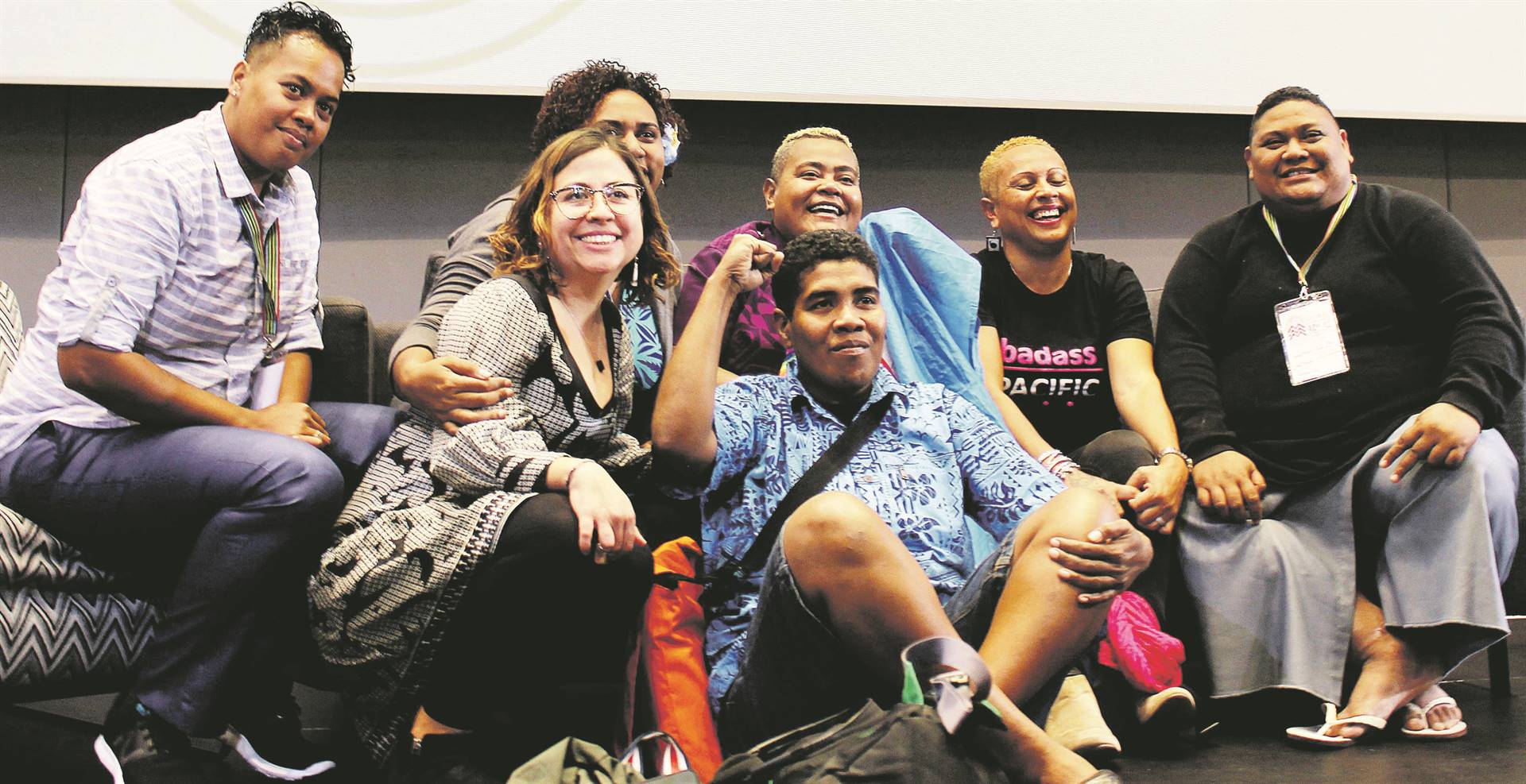 A group of international attendees at the first Global Feminist LBQ Conference in Cape Town which discussed a range of pressing issues. Picture: Supplied

“We’re not protected against unprotected sex, violence from gangsters in the community and the physical violence that comes with the stigma put on both being trans and on sex work.”

Despite the discrimination they face, she said she and her sisters have been able to seek support across facilities in Cape Town that are for trans-women, thanks to organisations such as Sex Worker Education and Advocacy Taskforce.

There were ongoing conversations about the importance of healing and support. We live in a world where well-being isn’t a priority.

In discussing identity and the practice of healing clients with multiple pains and traumas, the traditional healer said she was always looking at ways of creating spaces that “are welcoming and safe for people to become more wholly themselves and fully embrace the gift of life we inherit from our ancestors”.

Many questions arose from the conference, such as how can we be spiritual in the queer community?

Perhaps we need to have a connection to those who came before us while we attempt to establish one with those in our physical reality.

“I don’t consult solely but some of my patients are LGBTIQ+. . My experience has not been drastically different but there is a resonance and recognition of working with queer folk,” she said.

A consensus at the conference was that we end up measuring social justice progress in a capitalist way. There’s a constant need to make things tangible and it’s not enough. Inclusive laws don’t mean an inclusive society but it sure is a start.

This series on LGBTIQ+ life in Africa is made possible through a partnership with The Other Foundation. To learn more about its work, visit theotherfoundation.org