How Russia eased its way into SA nuclear 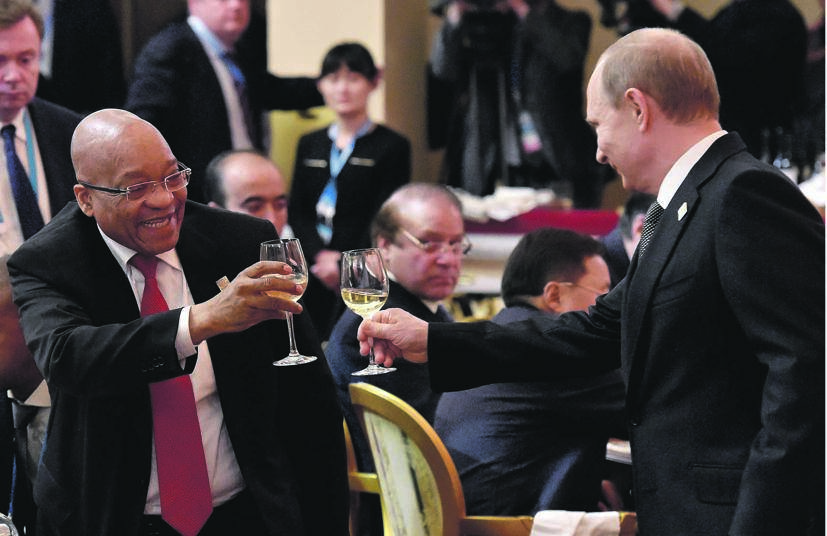 This file photograph shows a delighted former president Jacob Zuma and Russian President Vladimir Putin raising a glass to each other at a gala dinner held at the Bashkir State Opera and Ballet Theatre in Russia. Picture: Elmond Jiyane / GCIS

There are interesting parallels between state capture in Russia and South Africa, which culminated in the nuclear deal that would have benefited two distinct groups of “oligarchs” in the two countries.

Twenty-five years ago Russia and South Africa set out to redistribute control of their economies after the fall of the Soviet Union and apartheid South Africa.

Within two decades, powerful, new and corrupt oligarchs in both countries found they had common interests in the nuclear deal that would have shattered the South African economy.

When Vladimir Putin became president, some of the oligarchs under his predecessor, Boris Yeltsin, fell out of favour and fled the country.

But a new generation that included Putin’s friends and colleagues from his years in the Soviet intelligence service, the KGB, in St Petersburg emerged and they had a great interest in Africa.

It was the second wave of oligarchs who made their move in South Africa and befriended former president Jacob Zuma, I discovered while researching my new book, Cyril’s Choices, Lessons from 25 Years of Freedom in South Africa.

Russia’s involvement in South African nuclear energy and mining is part of a major increase in its African influence.

The nuclear deal negotiated between Zuma and Putin aligned the interests of these Russian oligarchs with the Guptas, who were oligarchs very much like their Russian counterparts.

The term “oligarch” refers to businesspeople with enormous political influence.

The two companies that stood to benefit from the nuclear deal were Rosatom, the Russian nuclear company founded by Putin, and Oakbay Resources and Energy, owned by the Guptas and the former president’s son, Duduzane Zuma.

Rosatom is the biggest nuclear construction company in the world and the world’s leading uranium enricher.

Its move into African nuclear energy was a shrewd bet on the future. International energy experts predict that Africa will be the next big arena for massive growth.

Rosatom has signed more than a dozen intergovernmental agreements in Africa and it is cooperating with at least 20 African countries, Kirill Komarov, Rosatom’s first deputy director for corporate development and international business, told Bloomberg.

Putin is listed in Rosatom documents as its “founder”. Rosatom’s executive authority resides with the nine members of its supervisory board.

It includes Sergey Korolev, head of economic security at the Federal Security Service.

The other eight are top government officials: Two assistants to Putin; one representative of the president in the far-eastern district, Yury Trutnev; one Cabinet minister (Alexander Novak, energy) and one deputy minister (Andrei Klepach, for economic development); the head of the Military Industrial Commission, Igor Borovkov; and the full-time general director of Rosatom, Alexey Likhachev.

All have intelligence backgrounds, mostly going back to the KGB, many from Putin’s kindergarten in the KGB in St Petersburg.

It’s clear that, for Moscow, Rosatom has strategic importance. But there has been little discussion in South Africa about how the country should position itself to benefit from the massive increase in demand for energy in Africa.

Vladimir Strzhalkovsky was chief executive officer (CEO) of the Russian mining giant, Norilsk Nickel, the world’s leading producer of nickel and palladium, and an important producer of other platinum group metals.

It owns the largest deposits of nickel, copper and palladium in the world and now operates in both South Africa and Botswana.

In The President’s Keepers, journalist Jacques Pauw refers to the arrival in early 2011 of an alleged “donation for Nkandla” on a private jet at King Shaka International Airport north of Durban.

The shipment originated in Russia and the sender was Strzhalkovsky, who is part of Putin’s second wave of Russian oligarchs drawn from the St Petersburg KGB.

He was brought to Moscow by Russian official Igor Sechin, considered a close ally and “de facto deputy” of Putin.

Sechin had been Putin’s private secretary in St Petersburg and moved with him to Moscow, first as the president’s personal secretary, before becoming deputy prime minister in charge of energy. Sechin had been a military interpreter in Mozambique and Angola in Soviet times.

Sechin brought Strzhalkovsky to Moscow because of his ties to Putin.

Norilsk Nickel had been owned by Vladimir Potanin, a sometime deputy prime minister under Yeltsin, who became one of the wealthiest oligarchs under Yeltsin.

But Potanin lost control of Norilsk Nickel to Oleg Deripaska. Potanin needed a new alliance: He went to Sechin.

Sechin brought in Strzhalkovsky as CEO of Norilsk Nickel.

“At the end of March 2011,” Pauw wrote, “the Russian multinational Norilsk Nickel said in a press statement that Vladimir Strzhalkovsky had visited Jacob Zuma and had handed the president a Russian mobile telemedicine laboratory at Nkandla. [Then state security minister] Siyabonga Cwele was present at the ceremony.

“It said in its 2011 statement: ‘Jakob [sic] Zuma expressed high opinion of the company’s current projects in the country. He emphasised that South Africa is ready to proceed with supporting the participation of Norilsk Nickel in new ore extraction and processing projects in South Africa.’”

Cwele told the then Sars commissioner, Oupa Magashula, to release it because it concerned “state security” – his agents were taking control of it.

“There was a lot of cash on that plane,” said Pauw’s source.

“A lot. Sars detained the plane with everything on board. When Cwele moved in he took over the whole shipment, including the money. The money was also not cleared and therefore illegally imported. Its origin and destination were never determined.”

Strzhalkovsky’s boost from Sechin catapulted him into the big league.

Trusted by Putin, he smoothed the way for those who lacked a direct connection to the Russian president.

He had worked in Africa in Soviet times and now used his African liberation movement networks and experience to come back to Africa, this time to make money.

Strzhalkovsky received a payout of $100 million (R1.49 billion) for brokering a settlement between rival shareholders at Norilsk Nickel.

John Matisonn is the author of Cyril’s Choices, Lessons from 25 Years of Freedom in South Africa

Did the Russian and SA oligarchs put the interests of the country first? Or was the nuclear deal just a way to make a fortune for themselves?

SMS us on 35697 using the keyword NUKE and tell us what you think. Please include your name and province. SMSes cost R1.50. By participating, you agree to receive occasional marketing material

We live in a world where facts and fiction get blurred
In times of uncertainty you need journalism you can trust. For only R75 per month, you have access to a world of in-depth analyses, investigative journalism, top opinions and a range of features. Journalism strengthens democracy. Invest in the future today.
Subscribe to News24
Related Links
Book Extract: Understanding SA’s successes and mistakes
Russia lands warplanes at Waterkloof as Putin hosts Africa’s leaders
Review: How to Steal a Country is a devastating reminder of greed, complicity and outright theft
Next on City Press
Is there a place for police in the future of South Africa?