EXCLUSIVE: How the SABC got wrecked 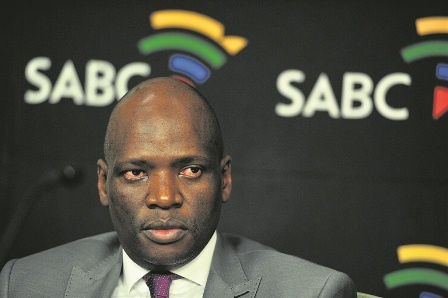 The financially decimated public broadcaster, SABC, has 20 business days to respond to a notice from the Companies and Intellectual Property Commission (CIPC), asking it to explain why it believes it is not trading recklessly under insolvent circumstances.

The SABC’s liabilities exceed its assets by R1.8 billion, according to the notice, which was served last Thursday, “and as a result, the SABC is not able to settle its short-term obligations”.

TV production houses estimate that only half of them were paid for December, and the SA Screen Federation says producers and their teams are facing a bleak new year as they are increasingly being expected to deliver shows that have not been paid for.

Even worse, say insiders, the SABC – which has had to write to Joburg mayor Herman Mashaba to help it keep the lights on – cannot afford new shows, and its advertising revenue will continue to slide.

The broadcaster is said to require R600 million a month to operate, but is apparently generating about R380 million in income.

However, there is some light at the end of the tunnel.

On Saturday a spokesperson for Communications Minister Stella Ndabeni-Abrahams told City Press help is on its way:

For now, though, under chief executive Madoda Mxakwe, the SABC is also wading through a relentless and expensive course of litigation and labour action as a result of the executive’s resolve to clean up the country’s furthest-reaching media operation ahead of next year’s elections.

Mxakwe and the SABC board, reduced to an inquorate four members following a spate of resignations – some of them believed to be politically motivated – have been working through an ongoing stream of internal investigation reports all year.

This, in an attempt to reclaim funds and measure the effect of the five-year reign – ending in 2017 – of former chief operating officer Hlaudi Motsoeneng and former chief financial officer James Aguma.

City Press has obtained thousands of pages of internal audit reports, minutes, contracts and emails that begin to reveal the scale and extent of the damage.

The documents informed the work of the Special Investigating Unit (SIU), which is in its first phase of taking civil claims to court involving hundreds of millions of rands in irregular contracts, promotions and salary increases.

Motsoeneng, who has had his pension withheld and faces civil action, last week flatly denied that the SIU claims had any truth to them, adding that that if he won his case, he would sue the SABC.

Aguma, who’s pension was also frozen, justified the decisions he made which form the basis of the SIU claims.

The documents reveal startling details of contracts not put out to tender, Gupta-linked activity, the dishing out of SABC databases and strategy documents to hand-picked contractors, and flagrant spending on vanity projects.

But the CIPC has the power to shut down the SABC, or creditors could go to court to force it into business rescue, with the board stripped of its powers.

SABC spokesperson Neo Momodu said: “The SABC is currently preparing a response, as requested. The corporation has kept the minister of communications informed and will be cooperating fully with the CIPC during this process.”

The broadcaster will be relying heavily on the minister’s latest statement.

It is believed to be unable to pay salaries come March and is likely to tell the CIPC that it is trading with the understanding that Treasury will provide a bank guarantee for a loan to finance its turnaround strategy.

The board has had a rocky relationship with the minister. In a recent letter to Ndabeni-Abrahams, its members refer to two earlier letters – written in September and October – requesting “urgent intervention with respect to the government guarantee application” and highlighting “the risks facing the corporation and its directors … including the SABC’s insolvency, compliance with the Companies Act by directors and the potential liquidation of the SABC – and no formal response has yet been received”.

CIPC spokesperson Tshiamo Zebediela told City Press last week that the commission was not acting on a complaint, but that the notice was “a proactive inquiry, which was triggered by our exercise of the oversight and monitoring functions as a commission”.

She added: “Some form of a turnaround strategy – in the form of an action plan – which can include a government guarantee may be sufficient for the notice to be withdrawn."

We live in a world where facts and fiction get blurred
In times of uncertainty you need journalism you can trust. For 14 free days, you can have access to a world of in-depth analyses, investigative journalism, top opinions and a range of features. Journalism strengthens democracy. Invest in the future today. Thereafter you will be billed R75 per month. You can cancel anytime and if you cancel within 14 days you won't be billed.
Subscribe to News24
Related Links
Hlaudi with a chance of becoming SA president?
Ramaphosa steps in as SABC board digs in its heels
‘No link’ between tender and SABC board resignations
Next on City Press
Ambassador to the US and her son in 'witchcraft and attempted murder' claims