In-depth | What is behind the massive cataract surgery backlogs in Gauteng? 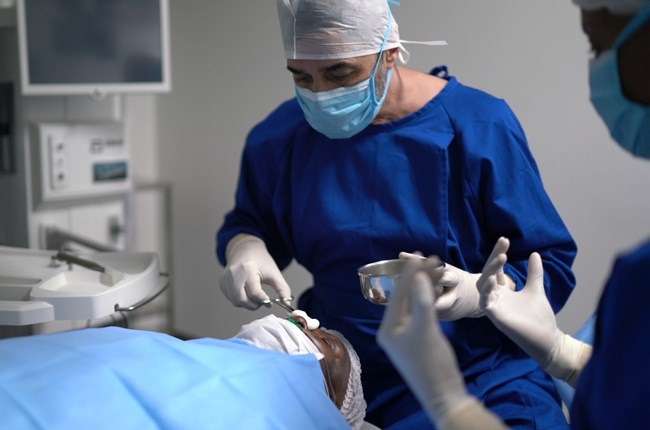 Gauteng’s confirmed backlog for cataract operations has crept up to just under 14 000 people – although some ophthalmologists believe the number is at least triple this – given Covid-19 disruptions. The provincial health department, however, remains silent on any catch-up plans it may have.

“The waiting times are also very variable; the longest being two years at Mamelodi Hospital, 22 months at Sebokeng Hospital, and 18 months at the Chris Hani and George Mukhari hospitals,” says DA member of the Gauteng legislature Jack Bloom.

Hospitals need support for overtime payment and skilled personnel and equipment to radically speed up the restoration of sight to thousands of people.
Bloom

Cataracts are small cloudy patches that develop on the lens in the eye and that can result in significantly impaired vision. Cataract surgery typically involves removing the cloudy lens and replacing it with an artificial one. The operation takes around 30 to 45 minutes.

While Covid-19 restrictions and pressures have hampered the provision of cataract surgery, deeper and more long-standing problems in the public healthcare system may also be to blame. As far back as 2011, an article in the South African Medical Journal warned of various staffing issues and the risk of long waiting lists for the sight-improving operation.

Ophthalmologist Dr Nicky Welsh, head of the clinical unit at the Charlotte Maxeke Johannesburg Academic Hospital, describes a “slow creep” of collapse and dysfunction at this key facility that is still not back to full function after a fire that broke out there in April. She suggests that the situation at Charlotte Maxeke hospital is emblematic of a wider malaise affecting ophthalmology services and healthcare in the province.

“Two theatres should be running full-time, five days a week. As a quaternary facility, we should be focused on doing the more complicated surgeries rather than cataracts, but we have patients coming from as far away as Heidelberg because there’s a dire lack of eye hospitals and clinics. So there’s a problem with how surgeries are being allocated to facilities and it adds to unexpected pressure for staff,” she says.

Welsh points out other problems, such as staffing issues that include poor productivity and low morale. There are also clerical bungles, mismanagement of hospital funds, maladministration and inaccurate data capturing to ensure patients can be easily located and contacted.

Welsh, who has worked at the hospital for 28 years, says:

You can count on one hand the times that there hasn’t been something that goes wrong on an operation day.

There’s also a shortage of nurses, porters and cleaners, which means that patients are not prepared for surgery on time, patient files can’t be located or theatres aren’t cleaned on schedule.

A significant number of nurses and support staff died from Covid-19, especially in the first wave. Added to this, she says many nurses have stress-related illnesses and chronic illnesses, meaning they take more sick days or complain of feeling poorly when they are on shift. They are also an ageing cohort of nurses and new staff members have not been added to their ranks because vacancies remain unfilled.

The number of ophthalmologists in the public health sector is also shrinking. Welsh estimates there are around 350 surgeons in the public and private sector combined, but says this number is likely an over-estimate as many surgeons have emigrated – their presence in the country limited to keeping up their professional registration fees.

Welsh says junior doctors are eager to do the operations to meet their training and qualification requirements, but the pressures associated with trying to do a job while drowning in the swells of public healthcare sector failings is disheartening. It’s also a blow to retaining them in public healthcare, or even in the country.

Along with strained human resources, there are regular shortages of consumables such as theatre gowns and drapes. Repairs and maintenance of equipment have fallen behind schedule and suppliers and service providers are reluctant to do work with government because they are not paid or are repeatedly not paid on time. On the other end, there are suppliers who inflate quotes, adding to the maladministration, misspending, and corruption that has been rife in the province.

Tracking down patients to schedule surgeries can also be hit and miss. Many who have been on waiting lists for a long time have changed their telephone numbers, so time is lost when staff members have to make multiple phone calls to track down a single patient.

The sad reality is that because there are such long waiting times, many of the patients have died by the time they get to the top of the list.

“We also find that many patients arrive for their surgeries, but they don’t have their hypertension or diabetes under control. Many couldn’t access their treatments easily during lockdown restrictions. We understand this, but it means we have to cancel those surgeries on the day,” Welsh says.

Ultimately, the multiple problems are “an erosion over many years and it is patients who bear the brunt”.

Waiting for more than two years

For someone like JD (full identity withheld), waiting endlessly for surgery while her sight deteriorated was too much anxiety to bear.

She tells Spotlight how her eyesight became an issue in January 2019. She got a referral letter from an optometrist for cataract removal and ended up at Charlotte Maxeke hospital.

“I was there one day by 7am and waited in the queue. The nurses and the queue marshals were very rude to everybody. They really couldn’t care less for patients and that was the worst experience out of all of this. Eventually, I saw a doctor at around lunchtime and he told me they could operate in November.”

At her November appointment date, all she got was eye drops and was told to come back the following year.

By the first quarter of last year, the pandemic stopped all non-emergency and elective operations – dashing JD’s hopes.

When we got to lockdown level 2 this year, I started phoning, and then I was told to try at St John’s Clinic because of the fire that had happened at Charlotte Maxeke hospital. I was there one morning at 5am and they told me I would wait a year and that I would be better off trying at Chris Hani Baragwanath. When I got there it was the same story.

By then, she says, the quality of her vision was “deteriorating week by week. Having cataracts is like looking through a dirty window. Everything is blurry and you also can’t see colours so you have to watch where you walk. I couldn’t read anymore.”

JD eventually borrowed the money from friends and family to raise the R45 000 needed for a double cataract procedure in a private practice.

“I’m lucky to have had the help of family because my husband and I are pensioners and I didn’t have the money. I don’t understand how it can be that you have to wait for two years for a surgery that is so important,” she says.

Dr Shabbir Hussain says cataract surgery should be a public health priority because of how much it can change a patient’s quality of life, at any age.

READ: Mental health: How are we doing? What do we need to do?

The head of ophthalmology at Leratong Hospital in Randfontein, Johannesburg, has since 2005 been heading up a community-supported initiative to do weekend cataract surgery blitzes once a month.

Through the support of the Muslim community and the Islamic Medical Association, the hospital has also been able to raise funds for artificial lenses, theatre consumables, eye care packs and microscopes, and to pay doctors, nurses and support staff to work over weekends.

“These weekend surgeries are at least something that we can do to clear the backlogs and we are ready to help other hospitals to start their weekend projects,” he says.

My gut feeling is that in Gauteng there can be up to 60 000 people who are suffering from cataract blindness because it was only in level 2 that we have been able to start booking patients. For more than a year now we have just been sending people home.
Hussain

Hussain’s first level 2 lockdown weekend surgery took place at the end of September. His team managed to operate on 35 patients, but he expects the next surgery blitz in October will reach around 60 patients. “We use three theatres that are empty over the weekends and we have help from surgeons and nurses who come from other hospitals. We pay something so that staff members have motivation to work over a weekend. To date, the weekend cataract project has helped 7 299 people,” he says.

Among those people was a group who gathered at a small hall at the Leratong Hospital at the end of September for a check-up. They were also invited to speak about their experiences. That their sight was restored almost instantly had patients filled with emotion and gratitude.

I couldn’t go to the shops because I couldn’t see anything on the shelves and I had to ask my grandchildren to help me. Now I can see the people on the streets; I can see what colours they are wearing, even from far, and I can read my Bible again.

Taking off his dark glasses, Sydney Mothosi (72) shows how the healing has already started two days after his surgery. He says he is still surprised by the almost instant restoration of his sight. “I could drive here myself to the hospital for my check-up. I can see the TV clearly now – before I was taking the chair right to the front of the screen.”

Alwyn Taljaard (55) chokes up remembering how he knew that if he didn’t get his cataract surgery by this past winter he would have to quit his job.

“I am a night-shift manager and I have to look at labels with small writing. I couldn’t see the labels anymore, even when I walked right up to the labels. I am so happy that I can see and that I have been able to keep my job. It’s wonderful; I can even see my wife again.”

Gauteng health department spokesperson Kwara Kekana was approached for comment and input on the province’s strategy to bring the cataract surgery schedule back on track, but had not responded by the time of publication.