India lifts Denel ban that has been in place since 2005 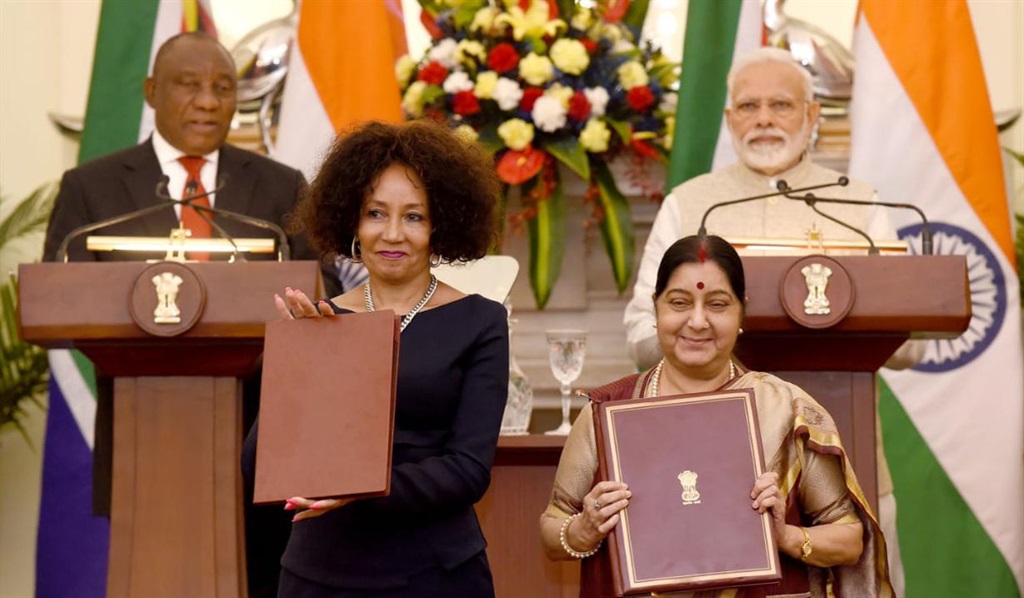 Embattled South African arms manufacturer and contractor Denel was handed a lifeline when India lifted its blacklist, which had been in place since 2005.

This is one of the critical developments that happened during a high-level meeting attended by President Cyril Ramaphosa in New Delhi, India, this week.

Ramaphosa was accompanied by several Cabinet members and businesspeople to the meeting, which looked at how agreements between the two countries were going to be implemented.

Denel was blacklisted in India in 2005 after allegations emerged that it paid kickbacks to a company based in the Isle of Man to help secure deals to supply the Indian army with rifles and rounds of ammunition.

The decision to lift sanctions means that India, which remains the biggest buyer of weapons, will be importing arms from Denel.

International Relations and Cooperation Minister Lindiwe Sisulu, who is part of the high-level South African delegation, said India had lifted sanctions on Denel.

“For us, one of the biggest industries in our country was Denel and when they were not able to deal with India it began to suffer losses,” Sisulu said on Friday.

“Now that we are putting all our energy into reviving Denel because of its capacity in Africa, we are looking to India for support.

“India has agreed to remove the barriers they had all along. They had refused to trade with us through Denel, but now they have put together a package for Denel. That will be necessary for the state-owned industry to get back on its feet,” Sisulu said.

She said the problems at Denel preceded the state capture period.

“When I was minister of defence in 2009, we already had problems with Denel. It does look like it preceded the state capture period. The Indian government had decided that they did not think Denel was trading with integrity and so they clamped down on us.”

Denel has been mired in scandal and mismanagement, which led to banks cutting off lending. Last year, City Press reported that Denel circumvented its own supply chain bosses to sign a highly irregular 10-year single-source supplier deal with Gupta-owned VR Laser. This is according to a forensic review report that has made its way into court papers.

However, Sisulu said South Africa had turned a new leaf under the leadership of Ramaphosa.

“We have opened up. The president keeps emphasising the new dawn and it is visible. We have been reiterating our position against corruption and dealing honestly with people. I think the world is beginning to understand that we have turned a new leaf and that they can do business. We are a new dawn.”

Denel, Sisulu said, was one of the companies that could easily have outperformed most of the other government entities.

“We just had serious management impediments. I am not aware that there has been a proposal brought to Cabinet about selling anything that belongs Denel,” she said.

There were reports that Saudi Arabia was vying for a stake in Denel, apparently following government’s intention to sell off a piece of the arms manufacturer.

“The Saudi Arabia bid was a bid to have a share in Denel because we were going down. It was a suggestion from the Saudis and it did not go further than that,” Sisulu said.

Ambassador Anil Sookalal said Indian Prime Minister Narendra Modi made it clear that he wanted to deal with South Africa in defence procurement and joint ventures.

“India has a lucrative market and of course Denel is one of the leading arms manufacturers globally and is key. The environment is now clear to look at both countries entering the defence space,” he said.

Sookalal said the decision to lift sanctions on Denel came as a result of political intervention.

We live in a world where facts and fiction get blurred
In times of uncertainty you need journalism you can trust. For only R75 per month, you have access to a world of in-depth analyses, investigative journalism, top opinions and a range of features. Journalism strengthens democracy. Invest in the future today.
Subscribe to News24
Related Links
Denel chair: ‘Blacks not interested in SOEs’
BMF blasts Gordhan over white Denel CEO
‘Severe crisis’: Denel urgently needs partnership to survive
Next on City Press
Political assassinations: ‘I wont apologise to DD Mabuza’