It’s 12.30pm on a hot and dry Thursday afternoon at Tikelo Intermediary School in Heidelberg, Gauteng. The ring of the school bell is followed by a rush of feet from the classroom.

Pupils scatter in all directions: some go to the shade and chat animatedly, others play in the sunlight, while a few others run to two communal water taps, taking turns to hold out their palms and gulp the water.

Six months ago, less than 10 steps from the concrete slab where the taps now run, a solar-powered purification device was fitted in a makeshift zinc structure.

Standing outside it are four tanks – two to store the raw borehole water and two for the pure water that flows into the taps that the children now enjoy.

The device purifies at least 1 000 litres of water a day. It uses the nut shells, not so much for their chemical properties but their strength.

They also work to harness the use of nanotechnology fibres to separate various bacteria from the water.

You do not see the nut shells in the filter – they are incinerated and processed, and are part of the system that cleans water from any source.

The nut shells, which would have been discarded, are sourced from a small-scale farmer in Venda, Limpopo.

Mafumo was referred to the Tikelo Intermediary School by the Gauteng education department for good reason: the school is located in an intensive beef-producing area.

“That dung seeps into the groundwater and increases the levels of E. coli, which is what we found in the water in the school. This was problematic because the water was being used by little children.”

The 33-year-old father of one is no stranger to being professionally involved with water. Having worked in the water and sanitation departments of the cities of Cape Town and Joburg for eight years in total, he knows what it takes to provide settlements with safe drinking water.

It was his upbringing in Venda that fuelled his passion, and his goal is to rebuild the water treatment plant there.

“I grew up in Shayandima township, where not having water was normal. We were used to not having water in the mornings and evenings. I realised that this situation was not normal,” he says, adding that the situation in his home town was the same when he visited just this week. 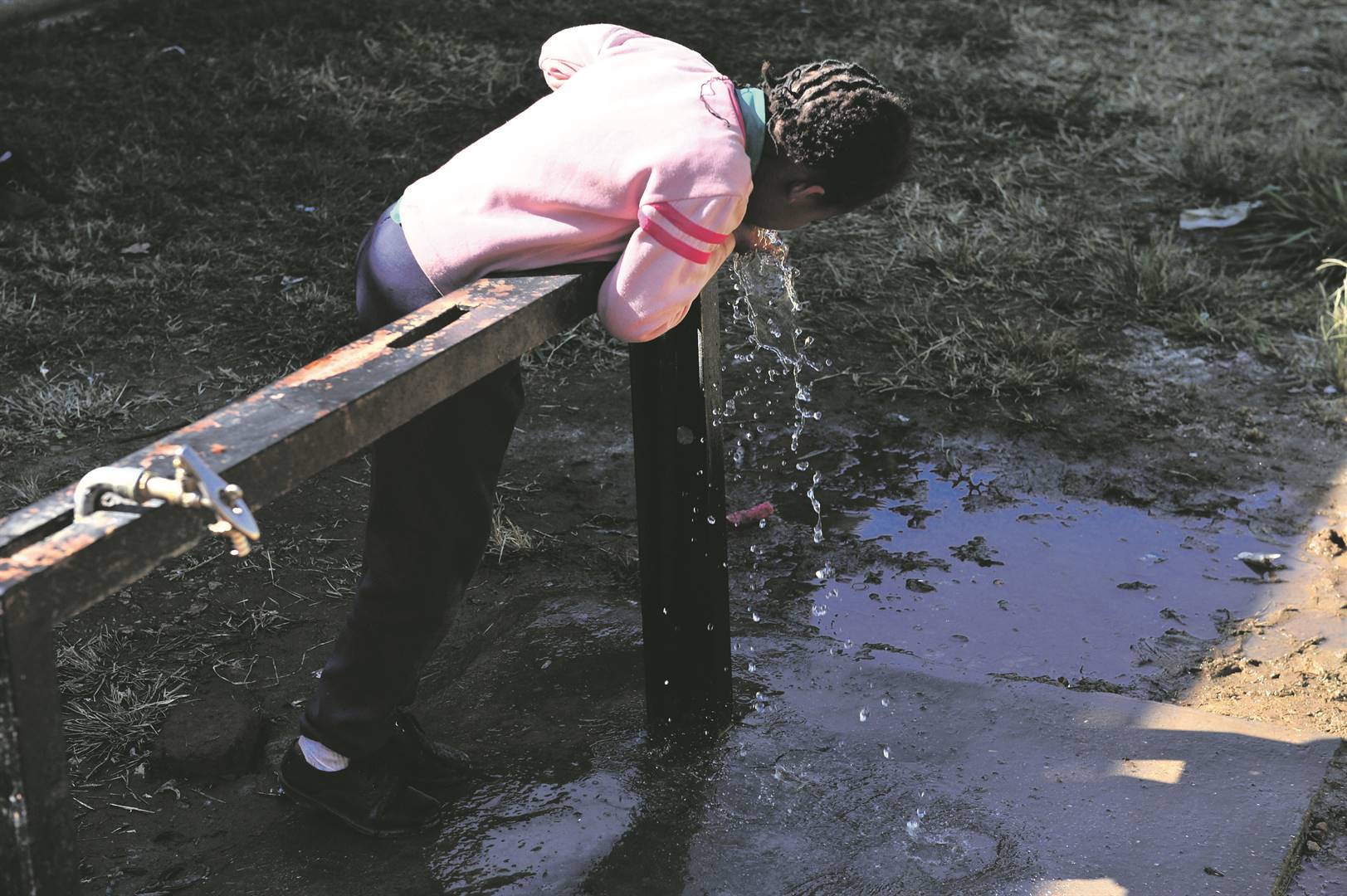 A school kid is pictured drinking water from the Kusini water plant that had been planted in Tikelo Primary school in Heidelberg. They have two water plants because they don't have clean water to drink. Picture: Cebile Ntuli

Mafumo says his company’s biggest challenge is to make the device sustainable.

“At least two out of three projects in the water space are donor-funded, and it has been shown that 50% of socially driven projects in communities fail within two years because communities do not have the resources to keep them going,” he says.

“In Heidelberg we have tried to make it as automated as possible, and it can be controlled remotely. This ensures that the system knows when it will need maintenance.”

Mafumo says it costs about R50 000 to set up the device with the tanks. His company model is simple: for every filter or litre of water a company sells through its other water products, it gives 20 litres of safe water to communities that do not have any.

Kusini Water launched its first system nearly two years ago in Shayandima, and its first mobile water container in October last year. The latter supplies water to the community of Extension 10 in Emalahleni West.

“I started my company three years ago to work with communities outside of the main water networks. The biggest challenge they face is either they are getting water brought in from tanks for which they have to queue – and the tanks do not arrive every day – or they have JoJo tanks. But with the latter, over time there may be health effects – for example, E. coli growth in the tanks,” he says.

Mafumo is part of the third cohort of Redbull’s Amaphiko initiative, which supports local entrepreneurs for 18 months. The next cohort will be inducted on June 15.

“Three years ago, I was purely a scientist,” says Mafumo. “The aim of Kusini Water is to bring about a systemic change in communities currently underserved when it comes to water and sanitation.”

How can communities be better resourced to ensure that socially driven projects succeed and remain sustainable?

We live in a world where facts and fiction get blurred
In times of uncertainty you need journalism you can trust. For only R75 per month, you have access to a world of in-depth analyses, investigative journalism, top opinions and a range of features. Journalism strengthens democracy. Invest in the future today.
Subscribe to News24
Related Links
Water in SA: 3 FAQs answered
Living with ‘dirty’ water
This invention is changing the way communities get water
Next on City Press
Taxis for ladies: How a Cape Flats activist launched a women-only driving school & taxi service

Choose a newsletter
Voting Booth
President Cyril Ramaphosa is set to address the nation at 8pm this evening on developments in relation to the country's response to the Covid-19 coronavirus pandemic. What are you more concerned about?
Please select an option Oops! Something went wrong, please try again later.
More business closures
35% - 49 votes
No clarity on vaccines
28% - 39 votes
Lack of government communication
17% - 24 votes
Move to level five
19% - 27 votes
Previous Results
The best of 2020
forsubscribers
Can you guess who featured in our most popular articles from 2020?