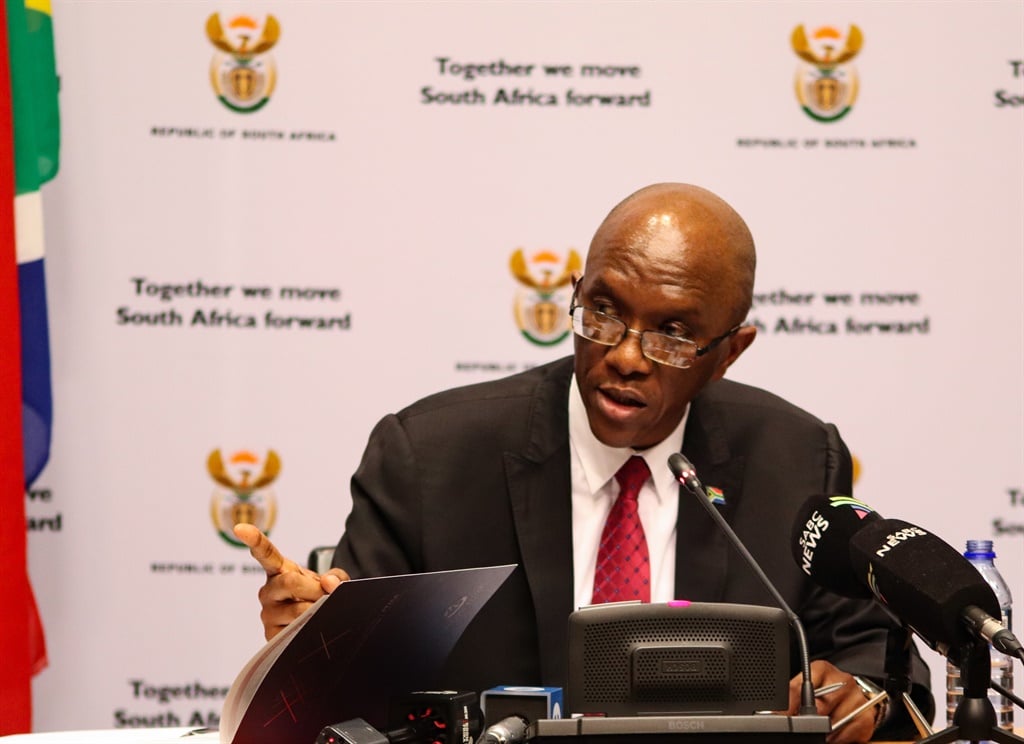 Auditor-General Kimi Makwetu has criticised the rapid implementation of Covid-19 coronavirus relief funds, saying money meant for wage protection and social and economic relief had been redirected to areas not originally meant for the funds.

Giving an update on the multibillion-rand Covid-19 relief package audit report released by his office on Wednesday, Makwetu said there were major flaws and corruption in various government departments tasked with dispensing the funds.

“When we looked at the information technology systems of government, we found that they were not responsive enough to take care of these new sums of money which were going to be filtered through these government system.

“We also uncovered pre-existing deficiencies in supply chain processes, which is not a new thing; we have been reporting on this for many years now,” said Makwetu.

We reached out to the accounting officers and said it would be useful for them to gear up their preventative controls that enable those entrusted with utilising state funds to prevent either internal or external misuse.
Kimi Makwetu

Makwetu said they were preventative measures that his offices had implemented. However this did not deter the haemorrhaging of state funds.

“Despite my office having reached out to accounting officers, accounting authorities and executives that were going to be charged with spending” the billions in direct funding from the fiscus as well as other money from the UIF and loans that government had granted to the tune of R500 billion, there were still “frightening instances” of mismanagement of funds.

“We reached out to the accounting officers and said it would be useful for them to gear up their preventative controls that enable those entrusted with utilising state funds to prevent either internal or external misuse. While some complied, others did not,” said Makwetu.

He added that his office had also gone on a detection exercise.

“From the detection side, which is like asking to taste someone’s food while they are still cooking, we uncovered a number of frightening findings that require us to follow up very quickly. We relied on data analysts, fraud expects, supply chain management experts and performance auditors – many of whom have expertise in the health sector, educations and infrastructure – as this was a multidisciplinary team effort that did not just rely on someone delivering an invoice to us, but us digging deep and scrutinising the various transactions,” said Makwetu.

He said what was evident was that the opportunity to commit fraud arose where the disciplines of internal controls had been weakened.

Makwetu also revealed that because of this scrutiny and the level of work that his office had done, they would be taking the data that they had extracted “which points to pointed risks of potential fraudulent activity in many of these transactions” and pass it on to the multiagency fusions centre.

“We believe that those people [the various law enforcement officials working together] have what it takes. They have the skills, tool and statutory mandate to take those matters that raised our levels of suspicions … so that they may be able to attach the requisite consequences that our initial suspicions as auditors have been proven,” said Makwetu.

The Auditor-General said he hoped to give a more detailed report regarding the losses incurred by the National Treasury as a result of fraud and corruption in his second report scheduled to be released before the end of November.

After the outbreak of the Covid-19 in South Africa, the government announced a R500-billion package for the health response and economic distress caused by the dramatic measures that had to be taken to contain the spread of the virus.

The relief package was funded by reprioritising the 2020-2021 budgets and securing loans.

Makwetu said of the R500 billion, R70 billion that was referred to as temporary tax relief meant to assist citizens with tax deferrals and postponement of some payments to the SA Revenue Services was not scrutinised by his office in the report that he tabled, since the revenue services had adequate avenues through which they could follow up on how the funds were utilised.

Also not investigated was the R200-billion credit guarantee scheme. The Auditor-General said the Reserve Bank national treasury did not have sufficient capacity to track and recover such funding between the lender and those provided for by the relief.

As a result, high number of payments were flagged that require investigation.
Auditor-General

The report shows that IT systems used in government were not agile enough to respond to the changes required. In addition “pre-existing deficiencies” in the supply chain processes of government, such as corruption, were amplified.

“Based on what was audited to date, there are clear signs of overpricing, unfair processes, potential fraud and supply chain management legislation being sidestepped.

“In addition, delays in the delivery of personal protective equipment and quality concerns could have been avoided through better planning and management of suppliers,” said Makwetu.

He added that a new system implemented for Temporary Employee Relief Scheme Benefits incorrectly calculated the benefits for the first lockdown period (March 27 to April 30) by not taking into account the actual period of inactivity and the portion of the salary paid by employers, resulting in significant overpayments.

“As a result, high number of payments were flagged that require investigation. These include payments to people who are below the legal age of employment, deceased, working in government, receiving social grants or students funded by the national student financial aid scheme,” said the Auditor-General.

Read: Shape up or ship out, Ramaphosa tells public service

According to Makwetu, there was also a risk that the R350 social relief grant was being paid to people who were not in distress.

He said the application process includes very limited verification to determine if the applicant is receiving other income and provides opportunities for people such as students or scholars older than 18 to also get access to the grant.

Makwetu also criticised the rate at which the department of sports, arts and culture had been dispensing its R235-million relief fund to assist artists, athletes and technical personnel affected by cancellations of sport and art events and to fund digital solutions.

He said the progress of distributing the funds had been slow, with large numbers of the applications rejected originally and now being re-evaluated.

Overall, Makwetu said of the R147 billion set aside for wage protection, social and economic relief only R68.8 billion had, as of the end of July, been spent.

“What it tells us is where we missed the bus in respect to raising the levels of preventative controls as a country, we still have an opportunity to the extent of the balance of another R70 billion that has yet to be spent from the beginning of August onwards. And I’m sure the leaders of government will pronounce on what those areas of priority are because some of them were set aside for relief of small business and the economy and other areas,” said Makwetu.

We live in a world where facts and fiction get blurred
In times of uncertainty you need journalism you can trust. For only R75 per month, you have access to a world of in-depth analyses, investigative journalism, top opinions and a range of features. Journalism strengthens democracy. Invest in the future today.
Subscribe to News24
Related Links
Editorial: AG Kimi Makwetu’s replacement will have work cut out for them
Limpopo municipalities spend R249m on consultants but only one receives clean audit
Auditor General’s new powers put to the test as 3 municipalities to investigate irregularities
Next on City Press
Bogus doctor Kosie appears in court on charges of killing his mother

Sign-up to our newsletters and get the latest results and info in your inbox.
Voting Booth
The Electoral Commission of SA (IEC) has accepted the report by former Deputy Chief Justice Dikgang Moseneke proposing that South Africa’s local government elections be postponed to February.
Please select an option Oops! Something went wrong, please try again later.
I was looking forward to the elections in October
42% - 143 votes
Postponement makes sense
46% - 158 votes
They should be later than February
13% - 43 votes
Previous Results
The best of 2020
Can you guess who featured in our most popular articles from 2020?