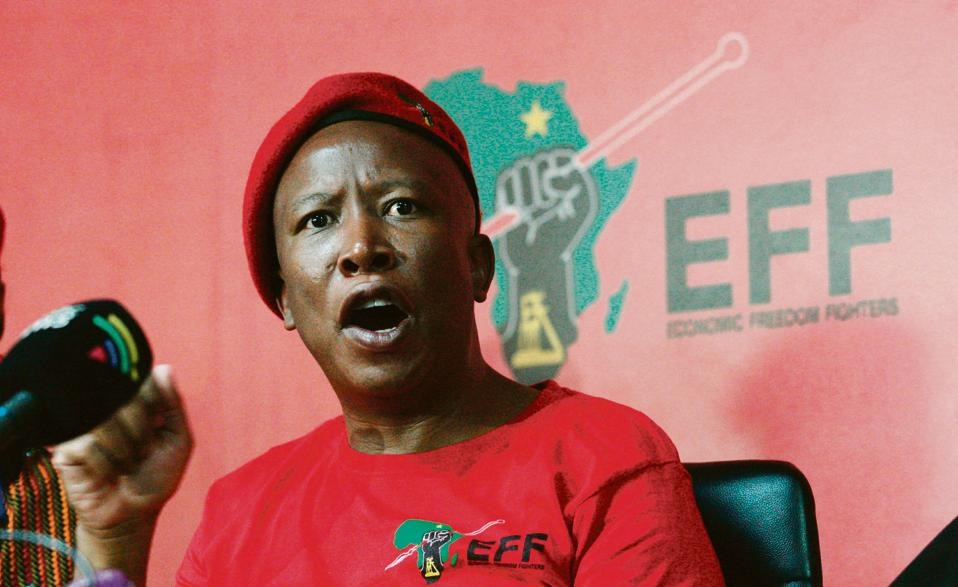 EFF leader Julius Malema is facing open rebellion within his party for the first time, after the student wing made it clear that it would oppose his intention to shut it down.

His plan to establish a women’s structure is also being resisted, as is his proposal to impose a leadership slate ahead of the party’s conference in three weeks’ time.

The EFF Student Command has challenged the party leader to a debate, saying he lacks guidance in his decision-making.

The challenge comes after Malema described the structure as “useless” at a press briefing last week.

The formation, which has become a key driver of the EFF’s growth in the wake of the #FeesMustFall campaign, said in response to Malema that the leader’s comments showed he did not know the extent of the influence wielded by the student command on the ground.

Do we need the EFF Student Command? Perhaps at the end of this address we should answer this because I am going to argue that we do not need the student command at the December conference.”

The uncharacteristic open defiance of Malema follows rumblings about the lobbying going on ahead of the party’s national elective conference, which it calls the National People’s Assembly, set to take place next month.

Up to 4 000 delegates are expected to gather at Nasrec, in Johannesburg, from December 13 to 16 for the EFF’s second elective congress since its formation in 2014.

While Malema and his lieutenants have run the organisation with an iron fist, EFF members have made it clear that they are not going to this congress to rubber-stamp leadership decisions.

City Press has already reported on disquiet in the party about the possibility of the national conference being turned into a mere rubber stamp of a predetermined leadership, which could see Malema and his deputy, Floyd Shivambu, being the only two leaders to be retained out of the current top six.

Now there is a groundswell of opposition to Malema’s desire to do away with the student command, and to his plan to establish a women’s wing.

This has resulted in the formation of two fashionably named EFF factions: the Amapiano and Amatorokisi.

The Amapiano want to challenge the status quo “of the party being run like a company, with a hierarchical structure in which leaders are chosen on behalf of members”.

The Amatorokisi, on the other hand, comprise Malema loyalists who want MP Marshall Dlamini to replace secretary-general Godrich Gardee.

“We cannot have intimidation and propaganda in the organisation,” said a leading member of the Amapiano faction.

“We, as ground forces, have a right to choose who we want to lead us.”

While they accept that Malema should continue as leader, they want Shivambu to be replaced by the party’s national chairperson, Dali Mpofu.

Another member of the faction said Dlamini’s elevation would be bad news for the EFF as he is involved in some controversial tender businesses.

“The reason they want Dlamini is that he is able to manage their businesses. If we continue to have Shivambu and Malema together, looting will continue. Look at the VBS Mutual Bank tenders,” said the Amapiano member.

Answering a question at last week’s presser about whether he would consider forming additional EFF structures, Malema said the party did not want to do this as it would be difficult to control many structures in an EFF that was still in its formative stage.

He cited as an example the student command, saying it was failing to manage and lead itself.

“For them to win political excitement we got ourselves into trouble. Now we have a student command which cannot organise elections, and we have to be there. Why? Because there is no organisational history, tradition and culture because we are a new organisation. They have got nothing to learn from,” Malema said.

He then took it a step further, saying the student command might be disbanded at the upcoming National People’s Assembly.

Earlier this year at the student command NPA conference, he made the same claims, saying the structure could not establish its own branches.

“Do we need the EFF Student Command? Perhaps at the end of this address we should answer this because I am going to argue that we do not need the student command at the December conference.”

Malema said the structure had not been able to do anything without the guidance of senior officials.

“It would not only hurt the members of the party, but also those individuals whom the members assist with institutional difficulties,” he said.

Mehlomakulu said the student command had been instrumental in building the mother body “as most people who say they know the EFF are students”.

These students, he added, had recognised the structure during university registrations and exclusions.

Siya Nyulu, the national gender officer of the student command, said the pain would be felt by needy students at tertiary institutions.

“I am not saying there is no EFF without the student command, but we are one, and there is a need for support. If you have a child and the child does not do as you say, as a parent, you will not kick the child out but support the child until he or she grows on its own.”

The EFF student command has already won elections this year at seven universities – including the universities of Cape Town, Venda, Mpumalanga, Limpopo and KwaZulu-Natal, and the Durban University of Technology – as well as at three Technical and Vocational Education and Training colleges.

The idea of establishing the women’s wing has been challenged by party communication manager Sixolise Gcilishe, who wrote in City Press: “I would like to challenge our commander in chief and the EFF leadership by saying that if they did not create a special wing to lure men, it should not be done for women either. If they want people to join the EFF because of its policies, let that be applicable to women too.”

However, MP Peter Keetse, a former student command leader, took a neutral position, saying he did not mind either way.

“It is not up to me. If they are to decide to disband it, then it is the decision of the EFF and the members. There is nothing I can do that will change the decisions of the conference.”

Former #FeesMustFall leader Busisiwe Seabe told City Press that she shared the same sentiments as Malema regarding the student command, but was quick to add that the structure had to be lauded for its victories.

Seabe also highlighted the fact that the student body was able to produce “talented” members who now serve as part of the mother body in Parliament.

The formation, which has become a key driver of the EFF’s growth in the wake of the #FeesMustFall campaign, said in response to Malema that the leader’s comments showed he did not know the extent of the influence wielded by the student command on the ground.

EFF MP Naledi Chirwa backed Malema on Twitter, saying: “The disbandment of the command does not equal the disbandment of student command activism, politics and organising. Branches will exist as EFF [sic], like in 2013/14,” she wrote.

WOMEN’S LEAGUE OR NOT?

While lamenting the weakness of the student command, Malema expressed interest in the formation of a women’s wing, in the hopes that it would assist in resolving the gender representation issues that the party currently faces.

The low interest in the EFF shown by women is reflected on social media statistics, where women account for less than 30% of the party’s followers.

Malema said the tepid support could be a result of many things, including the fact that there are only two women in the party’s top six – in the fringe positions of deputy secretary-general Hlengiwe Mkhaliphi and treasurer-general Leigh-Ann Mathys.

Mandisa Mashego, the EFF’s Gauteng leader, said a women’s wing would help society focus on the liberation and economic empowerment of women of all ages.

“The EFF must mobilise women, not for votes but to genuinely fight the scourge of racism and economic exclusion, as well as cultural and social exclusion from all economic sectors,” she said.

However, Mehlomakulu dismissed the idea of a women’s wing, saying doing so would be imitating the ANC.

“We cannot imitate the dying ANC. The women’s command will be seen as diluting and derailing the voice of women within the party, to the point where, instead of giving them leadership positions in areas that really matter and have influence, you just put them in [positions without advancement],” he said.

Mandisa Mashego, the EFF’s Gauteng leader, said a women’s wing would help society focus on the liberation and economic empowerment of women of all ages.

Nyulu said: “This woman’s command is not progressive, in the sense that it is already gendered. It is exclusionary to LGBTQI people because whenever we will raise issues about them, it will be raised by the woman’s command and not the mother body. To raise issues of such a nature should not be something that comes from women only.”

EFF national spokesperson Mbuyiseni Ndlozi told City Press that the party would not comment on the matter.

“The EFF is going to conference; that is where we will be discussing the issue. The CIC’s comments were made to inspire discussion.”

We live in a world where facts and fiction get blurred
In times of uncertainty you need journalism you can trust. For only R75 per month, you have access to a world of in-depth analyses, investigative journalism, top opinions and a range of features. Journalism strengthens democracy. Invest in the future today.
Subscribe to News24
Related Links
‘Why can’t white man support black man? – Malema wants DA to back EFF mayoral candidate
EFF councillor: ‘EFF a carbon copy of ANC’
NPA decides not to prosecute Malema – for now
Next on City Press
Medical aid schemes have committed unfair racial discrimination – report