The sky is the limit for Palesa Mokubung and her signature Mantsho label, after having made history as the first African designer to collaborate with fashion retailer H&M.

The sky is the limit for Palesa Mokubung and her signature Mantsho label, after having made history as the first African designer to collaborate with fashion retailer H&M

Sitting in her flagship store at 27 Boxes, the retail centre located in Joburg’s trendy suburb of Melville, she contemplates the extended exposure that will come with the billboards, TV adverts and other marketing campaigns.

Mokubung made headlines last week when it was announced that she was chosen by Swedish clothing retailer H&M as the first African designer that it would collaborate with.

Asked if this is what she has been working towards in her past 15 years in fashion, she says: “Oh hell no, I have one store. I thought in a few years maybe I will move this store to Rosebank or Sandton, or maybe take a few more containers here at 27 Boxes.

“Never did I think I would have a collection that would be available in South African stores as well as flagship stores in the US, UK, France, Spain, Portugal, the Netherlands, Belgium, Mexico, Chile and Israel.

“I got a call about six months ago from H&M SA, saying that they have been sitting with their global team and that I am on a short list of designers they are looking to collaborate with for their first African collaboration.

“They said the Swedish team was coming in and want to meet me, and want to visit my store and studio so they can get to select this designer.

“I think after they met me and felt the clothes and just saw the space and the people, and saw the work closely, they fell in love with the ethos of Mantsho, the aesthetic, the prints, the fabrics, the styles and, I think, me. The decision came a few weeks later.” Born in the Free State, Mokubung’s drive to succeed got her the right first gig in fashion with legendary brand Stoned Cherrie. Unsure of which direction to take on registration day at Vanderbijlpark Technical College, it was her mother’s random suggestion – ‘Hey Palesa, why don’t you try fashion design?’ – made from the adjacent room in their home, that planted the seed.

“When I got to the college, fashion had the shortest queue, so I joined that queue. I studied for a year and at the end of that year I left in the middle of class to look for a job. I walked into this shop; it was Stoned Cherrie. Nkhensani Nkosi, the owner, was behind the counter,” she says.

Mokubung tells the story of how Nkosi admired her skirt, which she had made, and offered her an opportunity on the spot to make similar ones since Nkosi had 100 metres of that very fabric.

The skirts sold out within a week. Mokubung did not return to class.

“I stayed with Stoned Cherrie for about three years. Stoned Cherrie was revolutionary. After three years, at 22 years of age, I had to find a way out. I had already been working, doing fashion weeks under the Stoned Cherrie umbrella, so by 22 I was a little burnt out and wanted something different. I don’t know if I was hungrier than the other designers, but I definitely had an itch to do more,” she says. With her mother’s help, Mokubung searched for competitions to enter and other ways to make her mark.

“I entered a design competition and won – it was called S’camto Groundbreakers. The other winners were ProVerb for music and Ntsiki Mazwai won in the poetry category. After I won the competition, I travelled to New York and Mumbai for six months and after that, I knew that I wouldn’t go back to Stoned Cherrie. That’s when I started Mantsho.”

Mokubung’s designs – in the form of printed fabrics that she creates in collaboration with other creatives, including her brother, graphic designer Mojalefa Mokubung – bring forth underlying messages, she says.

“Mantsho means black. But I have given it a different attitude over the years, with its other translation being to be brutally black. It also just means that black is beautiful, and typifies an attitude that I carry through my work, a certain type of energy that I give and the type of woman that I attract.”

Mokubung’s H&M collection consists of 14 garments and 10 accessories, and will cost between R559 and R1 500. 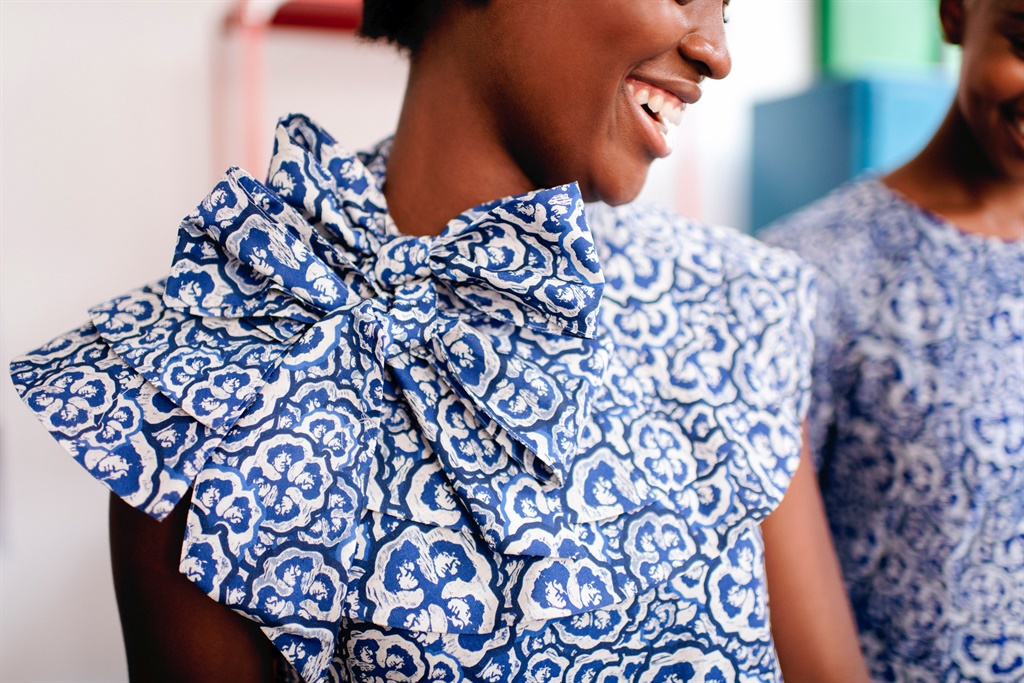 “The collection has all things that a Mantsho girl would love, the things that people come into my store for. There are about four different prints. All of them are made out of the signature Mantsho flower – and the Mantsho flower is my face. My brother designed this years ago. The styles are Mantsho’s bestselling styles, so you are going to find something that you always wanted. But the range is very limited. I think it might only be in stores for three weeks,” she says.

Mokubung is known for the way in which she works with colour, print and silhouettes, enhancing the female shape in a flattering and playful way. She pays homage to her Mosotho roots through the prints used in the collection, but without being obvious by using shoeshoe.

“If you squint, you might see shoeshoe. I wanted to pay respect to my culture, but using a Mantsho signature and something that would be recognisable to the world.

“When people from overseas come, they look for shoeshoe. So, I wanted to give them that, but as something modern, something current – futuristic even.”

When H&M called her, Mokubung thought about the backlash the brand faced in 2018, after it released an advert featuring a black child donning a sweatshirt with the words “coolest monkey in the jungle” written on the front.

“H&M is such a giant of a brand. I cringed a bit too because I know H&M’s history in South Africa. But my first reaction was a feeling of honour and disbelief that I am on H&M’s radar. When they called me to say I had been selected, I was doing my nails, so I couldn’t scream,” she said.

“These people have clearly taken responsibility [for that], apologised and done some introspection, and now they are interested in doing big things for women.”

Mokubung’s collection will be available from August 15.

We live in a world where facts and fiction get blurred
In times of uncertainty you need journalism you can trust. For 14 free days, you can have access to a world of in-depth analyses, investigative journalism, top opinions and a range of features. Journalism strengthens democracy. Invest in the future today. Thereafter you will be billed R75 per month. You can cancel anytime and if you cancel within 14 days you won't be billed.
Subscribe to News24
Related Links
SA’s Palse Homme designer looks ahead after winning at Swahili Fashion Week
How H&M is trying to ensure ‘coolest monkey’ hoodie incident never happens again
‘Deeply sorry’ H&M appoints global leader to address diversity
Next on City Press
Joburg council to vote for new mayor as Phalatse is voted out