No toilets and no support from the state 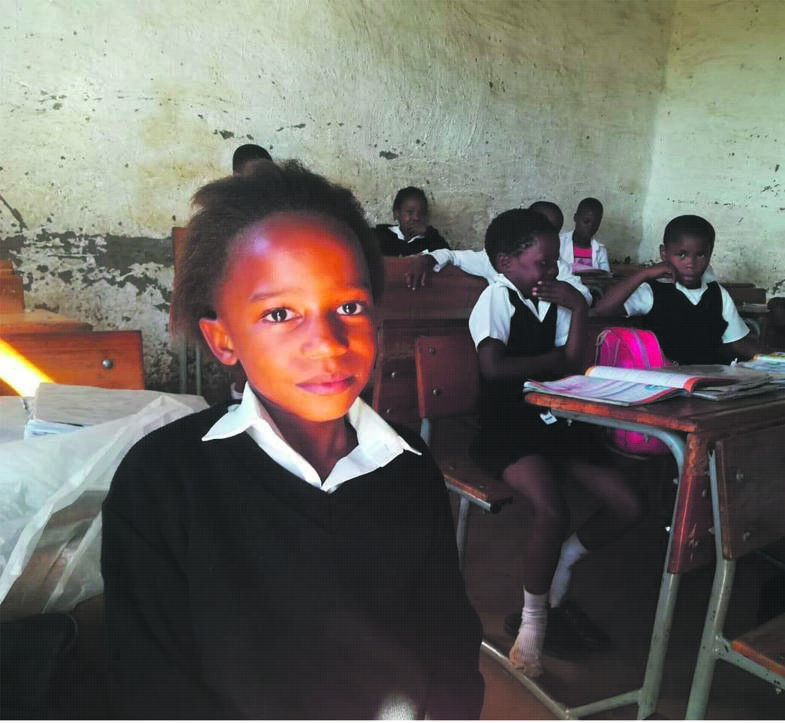 INTOLERABLE Grade 2 pupil Olana Chako, who wants to be a nurse, says it is unbearable to be in a school that has no toilets. Picture: Lubabalo Ngcukana

Dingilizwe Senior Primary School in the Eastern Cape was established in 1985, but still does not have a single toilet for pupils to use.

The teachers used to have to ask neighbours to use their toilets, until principal Ntuthuzelo Jameson gave up his own pit toilet at home and had it installed at the school. The single small pit latrine is the only toilet available to teachers of both sexes.

But the pupils, who range in age from five to 13, have to use an open field in full view of their schoolmates.

The school is less than 5km from Libode along the busy R61 road between Mthatha and Port St Johns.

Jameson said repeated pleas for help from the provincial education department have been ignored for years. In 2016, the department promised to build them a proper school and provide them with prefabricated classrooms while the school was being built. But nothing materialised.

“At the end of 2016, we were informed by the department that there was no money to build the school, and that was the end of it,” he said.

Jameson said that, in 2013, the department threatened to close down the school due to low enrolment numbers – there are 108 pupils. One of the reasons there are so few pupils, he says, is because of the inhumane conditions there.

The school’s five classrooms are made of a mixture of concrete bricks and mud, and the roofs leak when it rains. Jameson shares a small room with other teachers – it’s used as the principal’s office, staff room and as a storeroom. There is no fence around the school, making it a haven for criminals. After recent heavy rains, the classrooms were badly damaged by water, which came through the roofs and flooded the floors.

“This situation is really not nice. Yesterday [Wednesday] was Workers’ Day, but, for us, there is nothing to celebrate because our working conditions are appalling. How are we expected to work at a facility as teachers employed by the state where there are not even toilets?” Jameson said on Thursday.

“The roofs of the classrooms are falling apart. The walls are cracking because classrooms are made of mud. The staff morale is at an all-time low because these are the worst conditions to work under.”

Grade 2 pupil Olana Chako (7) said all she wanted was for government to build toilets for her school, even if they did not build new classrooms.

Olana, who said she wants to be a nurse when she gets older “so that I can have money”, said it was unbearable having no toilets at school.

“We see that other schools have toilets, but there are none at ours. We are forced to go to the bush. We first have to look for paper in dustbins so that we can clean ourselves after we have relieved ourselves,” she said.

Olana says the worst thing about not having toilets is that the boys can see the girls when they relieve themselves.

Jameson said he and the school governing body have written many letters to the department over the years. The pupils have to relieve themselves in front of everyone, because they have no toilets to use. Picture: Lubabalo Ngcukana

In one, dated March 26 2014, Jameson writes of having no toilets, leaking roofs and no fence.

In another, dated November 3 2016, he reminds the provincial education department of the same issues.

He wrote: “Imagine a school without toilets at all, then ask yourself what kind of school is that? Having no toilets contributes negatively in terms of pupil enrolment numbers, and the children who come to this school are those who are still young.”

School governing body chairperson Nosivile Tafeni said she had no idea why government was ignoring them.

“We have written countless letters to the department, but nothing has happened. We are seriously desperate. Besides the issue of the toilets, the school is not fenced and strangers just walk into classes and go talk to the teachers while they are busy,” she said.

“We are going to vote next week and the school has been identified as a voting station. I am sure they will hire temporary toilets for the day and take them away after that. We don’t know what we need to do for government to take us seriously in this country.”

Provincial education spokesperson Malibongwe Mtima said the school was receiving attention from the department. However, he did not specify the nature of intervention that the department is planning for the school. The demand for infrastructure across the province outstrips resources by far, he said, adding that the private sector should pitch in and assist in eradicating infrastructure backlogs.