Our taps are running dry: Demand exceeds supply in large parts of SA While everyone has been preoccupied with the recent bout of load shedding, our taps also appear to be running dry.

In large parts of South Africa demand for water currently exceeds what is available.

In many towns and cities, we’re already using water that is supposed to be saved for later.

This is the picture that emerged from research on water security that Human Settlements, Water and Sanitation Minister Lindiwe Sisulu recently tabled in Parliament.

The 13-page document lists regions, towns, cities and municipalities in all nine provinces where the demand for water exceeds the present supply.

Sisulu said the document was the result of an “in-depth analysis of available water resources across South Africa”.

Although the research was done in 2014, the information has been updated in cooperation with the water boards and water suppliers countrywide.

“We did the study to get an advance estimate of the worst possible conditions that could arise so we can plan properly,” he said.

The study is based on a working water system, however, this is not a reality everywhere in South Africa. Ratau said this factor was also taken into account.

He said the general causes of South Africa’s water shortages were:

. Less rain, as well as extended droughts and the climate crisis;

. The increasing population and industrial growth;

. Aged infrastructure, pollution, wastage of water as a result of leaks in homes, in streets and at large water plants;

Willem de Clercq of the Water Institute at Stellenbosch University in the Western Cape said news of the looming water crisis had been general knowledge among experts in the field for a few years already.

“The hard reality is that we are at the end point of our water supply – we have reached the ceiling. Like the current situation with electricity, people will urgently have to begin looking at how they can save water every day,” he said.

“The biggest challenge is that existing systems have to be changed to firstly make more water available, and secondly to store it. And one has to give the department credit here – plans to provide enough water have been ready for years, but it’s the implementation of the plans that has failed. Most of the plans only exist on paper, whereas these ideas should already be delivering results.”

Ratau said plans the department was looking at included:

. The utilisation of new water sources such as rivers where there are no dams at present;

. The utilisation of available underground water;

. The reclamation and purification of grey water;

. The collection of more rainwater; and

. The desalination of sea water, where possible.

He could not, however, say which of these plans had been developed and executed.

De Clercq said the bigger reason for this was that the department did not have money to implement its plans.

The drought in parts of the country has also forced the department to focus on emergency measures instead of long-term planning. 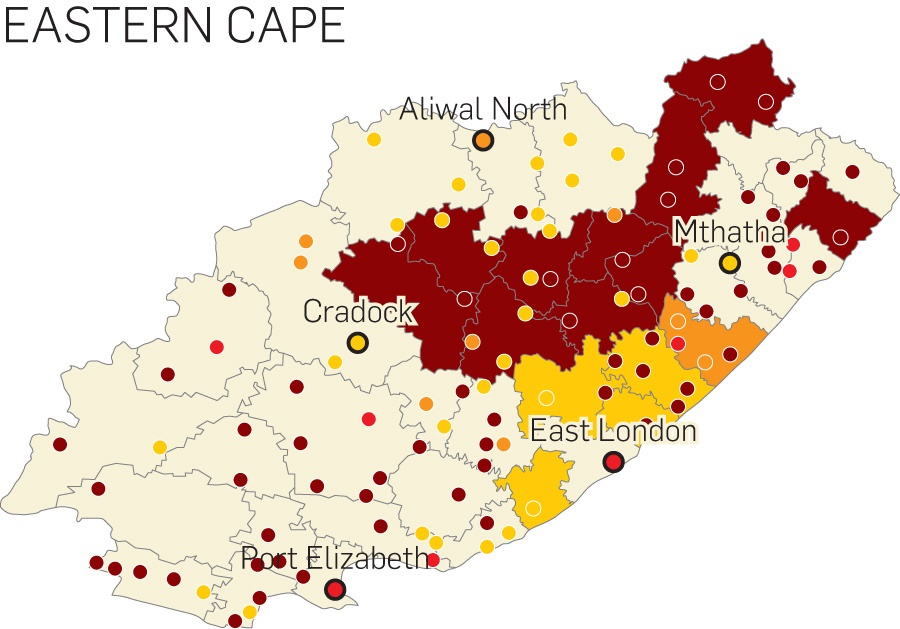 According to De Clercq, desalination was one of the many projects that should already be delivering water, but construction had not even started.

Anthony Turton of the department of environmental management at the University of the Free State has warned that the department’s rescue plans often placed too much emphasis on consumers having to save water.

“It gets said over and over, and they’re beginning to sound like a stuck record. One has to remember that daily water use, such as drinking water and water to flush toilets, only makes up about 2% of South Africa’s daily water consumption,” he said.

“The largest quantity of water is needed for agriculture and industrial activities. If we run out of water, it’s going to have enormous implications for our country’s economic wellbeing.”

He said foreign investors were already scared of investing in South Africa as a result of challenges including an unstable electricity supply.

“If we have water problems on top of the power problems, the risk simply becomes too big.”

Turton said a few experts were busy establishing the SA Business Water Chamber, which would aim to help government overcome these challenges.

We live in a world where facts and fiction get blurred
In times of uncertainty you need journalism you can trust. For 14 free days, you can have access to a world of in-depth analyses, investigative journalism, top opinions and a range of features. Journalism strengthens democracy. Invest in the future today. Thereafter you will be billed R75 per month. You can cancel anytime and if you cancel within 14 days you won't be billed.
Subscribe to News24
Related Links
Kimberley’s dirty water crisis
Municipality fails to act on official in R22m tender
How one of SA’s most valuable properties was given to Gupta-linked company for virtually nothing
Next on City Press
‘Use Enyobeni tavern tragedy to start conversations around alcohol with our children’ – psychologist