Protest ahead of World Economic Forum opening in Durban 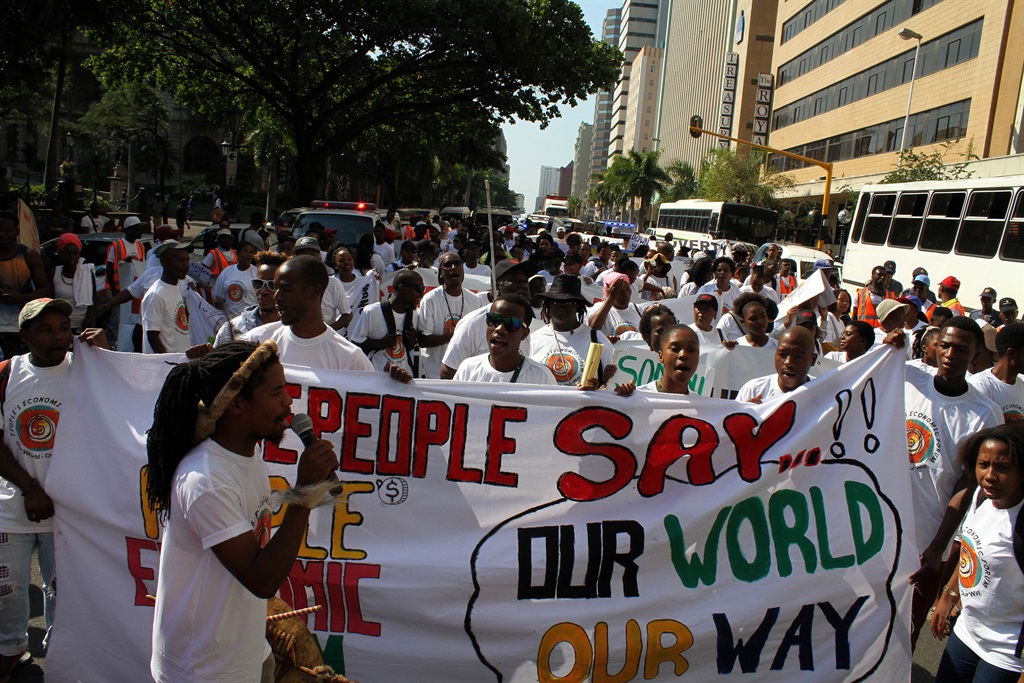 Protesters march through the centre of Durban ahead of the official opening of the World Economic Forum on Africa 2017. Picture: Siyanda Mayeza/City Press

A small but enthusiastic group of protesters has marched through the centre of Durban ahead of the official opening later today of the World Economic Forum on Africa 2017 by President Jacob Zuma.

Several hundred marchers, led by a wide range of community and environmental organisations, had earlier participated in the People’s Economic Forum taking place at the Durban University of Technology involving civil society organisation opposing the holding of the gathering in the city.

The WEF meets in Davos, Switzerland, each January and later in one of the main regions and this year brings together about 2 000 delegates from governments and multinational corporations, for the Durban meeting.

Protesters, among them members of the Association for Rural Advancement and the South Durban Community Environmental Alliance (SDCEA), carried banners and placards calling for a more equitable international economic order.

They sang struggle songs and chanted anti-capitalist slogans while gathering in small numbers at the City Hall before making their way past the US Consulate to the International Convention Centre, where the WEF meeting is taking place.

Addressing the marches, SDCEA chairperson Desmond D’Sa said that international capital, led by US President Donald Trump, was responsible for the ordinary residents of Durban and other cities around the world being excluded from the economy and being denied the right to land and jobs.

“In our communities we are being denied our rights to live in a clean environment. We know that the multinationals are polluting our communities and destroying the areas we live in.

"Here in the ICC we have the leaders of the US, some of the worst polluters on the planet,’’ said D’Sa.

D’Sa said that civil society needed to “watch out” for the deals being concluded at the WEF which were aimed at enriching multinational corporations and oppressing working people by making the basic commodities, like food and accommodation, unaffordable.

“We need to unite and stop these people from denying us our rights,” D’Sa said.

D’Sa said the people of South African had overthrown the system created by the National Party to oppress black people and now needed to fight against the legay of Donald Trump, “a racist who hates anybody who is not white.”.