Police were on hand to disperse protesting #FeesMustFall students at the Pietermaritzburg campus of the University of KwaZulu-Natal. PHOTO: Siyanda Mayeza

Police have shot rubber bullets and fired teargas as a #FeesMustFall protest at the University of KwaZulu-Natal’s Pietermaritzburg campus turned nasty today.

A number of protesters have also been arrested. Students said they wanted an education and wanted to study, but they were insisting on a 0% fee increase.

“We cannot continue to go to class if things are like this. Ultimately, we want the government to announce the 0% fee increment,” student representative council deputy president Sunshine Myende told News24.

A number of metro police, South African Police Service officers and private security guards were on the campus today.

“We have issues here for a long time. From the appalling conditions of our residence to our shoddy curriculum, the university is not listening to us.”

She said students were angry, but were willing to keep the peace, for now.

“People must not get this perception that we do not want to study. We do, we want to get our degrees.”

Police were on hand to disperse protesting #FeesMustFall students at the Pietermaritzburg campus of the University of KwaZulu-Natal. PHOTO: Siyanda Mayeza 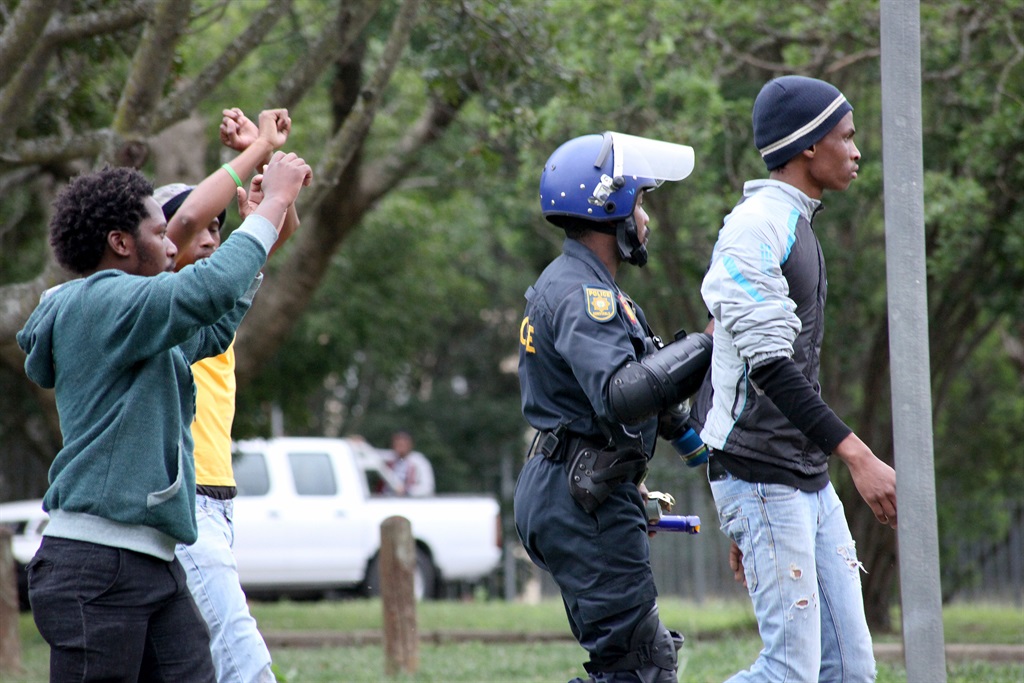 A student is led away by a member of the South African Police Service as a protest over fees at the Pietermaritzburg campus of the University of KwaZulu-Natal got rowdy. PHOTO: Siyanda Mayeza Members of the South African Police service were called in when University of KwaZulu-Natal students protested – they were insisting on a 0% fee increase. PHOTO: Siyanda Mayeza The entrance to the Malherbe Residence (men and women) is set alight during a #FeesMustFall protest at the University of Kwa-Zulu-Natal. The residence is situated on Durban Road opposite the university. PHOTO: Siyanda Mayeza Police dressed in riot gear had to step in during a #FeesMustFall protest in Pietermaritzburg today. PHOTO: Siyanda Mayeza Police officers march away one of the protesters at the University of KwaZulu-Natal. PHOTO: Siyanda Mayeza Myende called on the government to provide leadership in the debate over tertiary education fees.

University spokesperson Lesiba Seshoka said that classes at the Edgewood, Nelson Mandela Medical School and Westville campuses had not been affected. He said tests had been disrupted on the Howard College and Pietermaritzburg campuses.

Higher Education Minister Blade Nzimande announced on Monday that universities could decide their own fee increases for 2017, but that these could not exceed 8%. He said the government would find the money to help financially needy students.

Students from households with an annual income of up to R600 000 would get subsidy funding to cover the gap between the 2015 fees and the adjusted fee for 2017, for increments up to 8%.

This meant that all National Student Financial Aid Scheme-qualifying students and the so-called “missing middle” would have no fee increases in 2017. The latter are students whose families earn too much to qualify for aid scheme funding, but who were unable to pay for tertiary education. – News24