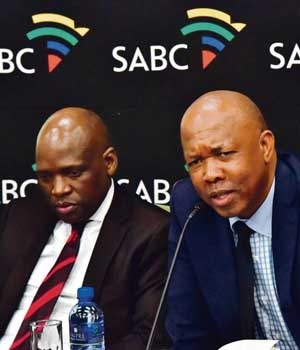 A wave of suspensions in the division that processes payments the SABC makes to its suppliers has followed last week’s suspension of group CEO Frans Matlala.

Eight senior SABC staff and insiders with close knowledge of developments in the procurement division told City Press the suspensions were in part linked to the broadcaster’s procurement of a much-heralded rugby World Cup studio for R42.3 million.

The sources – who spoke on condition of anonymity, fearing they would lose their jobs or jeopardise their colleagues’ jobs – claim that the managers are being targeted after they were unwilling to sign off on a number of payments involving at least five companies because of procedural irregularities.

“Letters of intention to suspend have basically been served on all senior managers in procurement,” said one highly placed source.

“The people working there say it feels like it’s part of a purge,” said another.

The SABC did not respond to questions from City Press about the dramatic week in its procurement department. In response to earlier questions about Matlala and the multimillion-rand studio, spokesperson Kaizer Kganyago said: “As indicated in our statement, the organisation will not comment further on this matter until all processes are finalised.”

The statement on Wednesday had been to announce the suspension of the CEO, “pending further investigation”.

Executive head of procurement Madoda Shushu confirmed yesterday that he was suspended, but was unwilling to comment further. He has been in charge of procurement since June 2013.

City Press has learnt that both general managers in procurement – Tumiso Radebe and Irene Marutla – were served with letters of intention to suspend them. Neither was available for comment.

Insiders say other senior staff in the department believe they will be next. 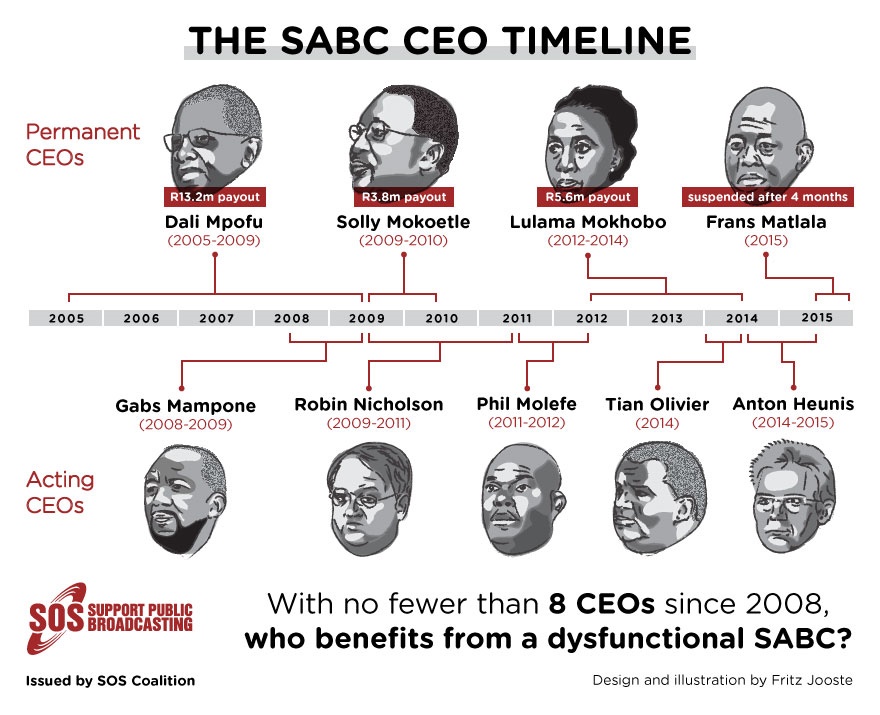 Last week Matlala consulted lawyers, who responded to allegations against him in a letter to the SABC. It was reported that the letter from lawyer Joe Mothibi said Matlala “cannot understand what is meant that he instructed certain officials not to pay suppliers”.

Matlala claimed he was targeted in “retaliation” for, among other things, cooperating with a Treasury investigation into the SABC and for raising procedural concerns around the disciplinary inquiry into chief operating officer Hlaudi Motsoeneng, who is on a leave of absence yet whose presence is still very much felt in the SABC building.

Matlala is reported to have said that the board’s decision to suspend him was “illegal” as it did not have a 70% majority.

Of the 12-member board, already depleted to nine, only eight could vote – as Matlala, who serves on the board, could not vote on his own suspension. City Press understands that only five members of the board supported the suspension.

Several SABC insiders told City Press that the Treasury investigation referred to was spurred by the rugby World Cup studio. Late last month, the Sunday Times reported that the R40 million-plus studio commissioned from production company Vision View was worth far less than that.

Motsoeneng told the newspaper: “I have a problem with tenders. I prefer that a company come and make a presentation to us. If we are happy, we give them the job.”

Kganyago said the SABC “deviated from normal procurement processes ... due to the urgency of the projects in view of the looming rugby World Cup”.

Communications minister Faith Muthambi was present at the September 16 launch of the high definition (HD)-enabled studio intended for sport and news broadcasts, starting with the World Cup. She commended the SABC leadership and said the studio would help prepare the SABC for digital migration.

However, critics noted that the SABC does not yet produce HD television and that Motsoeneng was, in his speech, preoccupied with the studio’s ability to change colours. Matlala was present but was not called on to speak.

City Press has seen documentary proof that at least R42.3 million was spent on the new studio. The amount did not, however, need board approval under the SABC’s new Declaration of Authority framework, which came into being in June.

The new policy, instated under Motsoeneng, allows a procurement operations committee to approve expenditure of up to R50 million.

Vision View’s co-owner, Mafadi Mpuru, declined to comment due to “contractual obligations”. He did not say whether the company had been paid.

However, three senior SABC sources said they believed payment had not been made and the officials were suspended partly because of this. Kganyago would neither confirm nor deny this.