Scramble to get to level 3: 'We cannot compromise life for the sake of just making money’ 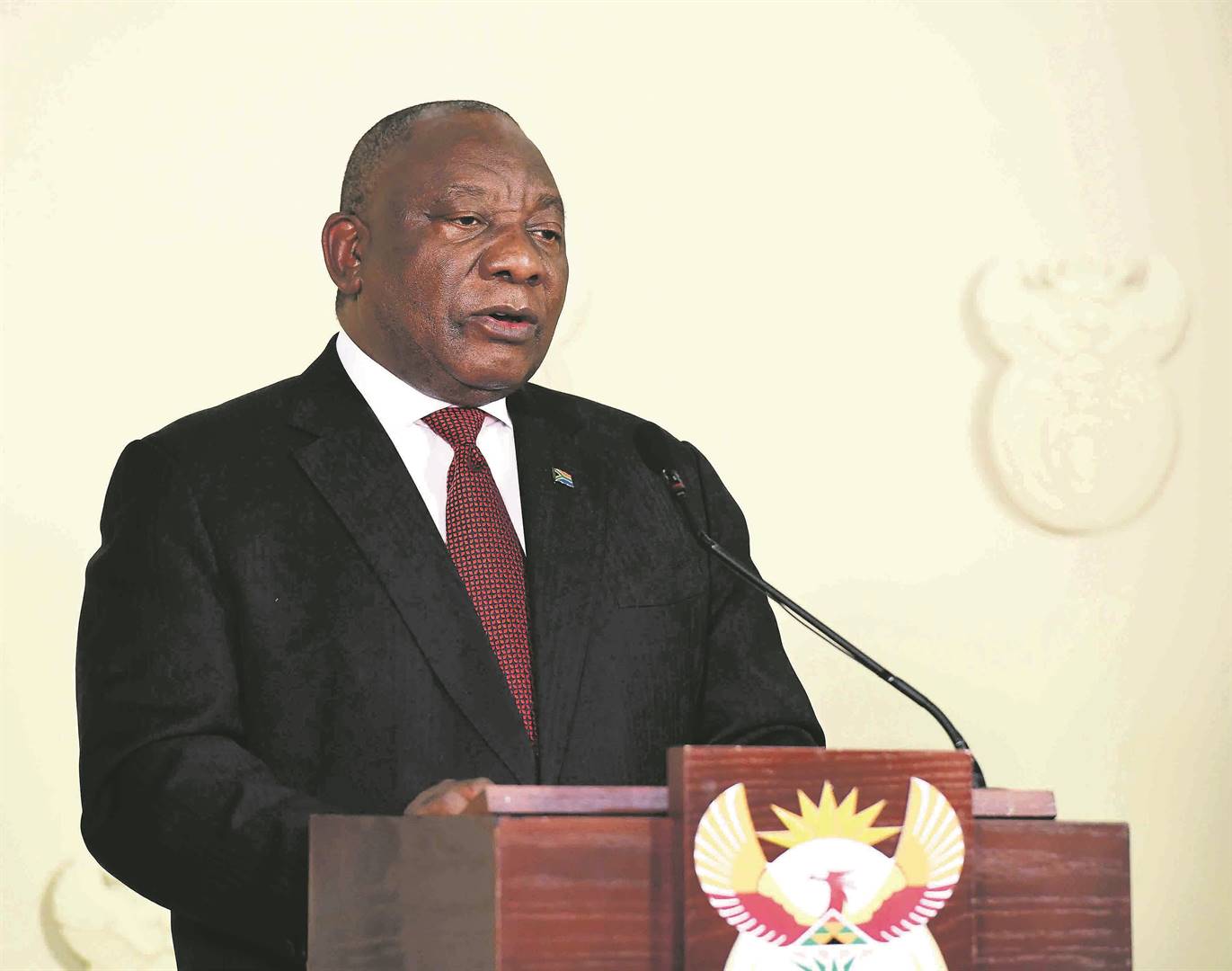 President Cyril Ramaphosa and his national Covid-19 command council are preparing for level 3 of the nationwide lockdown, which will be implemented from the end of May – but only in certain areas. Picture: Jairus Mmutle / GCIS

Business gets ready to open up, but organised labour is worried that moving too quickly will put scores of workers and taxi drivers at risk of infection

Following President Cyril Ramaphosa’s announcement that large parts of South Africa would move to level 3 of the Covid-19 coronavirus lockdown at the end of the month, most provinces have pronounced themselves ready for the move.

But many risks have been highlighted that could dampen enthusiasm.

One of them is that there is a rapidly rising number of infections in densely populated townships, and the taxi industry – whose vehicles can only operate at 70% capacity – may struggle to cope with larger volumes of workers, as the Metrorail and bus systems will not be ready in time to ensure safe transportation.

Trade unions have also warned that, while businesses are excited that more sectors are being opened, they have not demonstrated that they will be able to protect workers from exposure to infection.

The district-based lockdown approach announced by Ramaphosa will see districts being differentiated by the average number of active cases per week per 100 000 people.

We can't compromise life for money

Although the parties represented at the National Economic, Development and Labour Council (Nedlac) endorsed the approach at a meeting chaired by Ramaphosa on Friday, labour warned that business was more concerned with getting economic activity going and didn’t care about the health implications for employees.

Cosatu general secretary Bheki Ntshalintshali, who serves as organised labour’s overall convener at Nedlac, said the move to level 3 must not just be done in the interest of business.

“We cannot compromise life for the sake of just making money. We raised our concerns that, while we all agree on the reopening of the economy, it must be with caution. The evidence that we have so far is negative,” Ntshalintshali said.

He explained that local governments could introduce heavy penalties for noncompliant businesses, including shutting them down.

Ntshalintshali said the transport system could be a “weak link” when it came to the safety of workers, something business owners and managers were not taking into account.

We raised our concerns that, while we all agree on the reopening of the economy, it must be with caution. The evidence that we have so far is negative
Bheki Ntshalintshali, Cosatu general secretary

“If you are opening up the economy, taxis will not be able to meet the needs of commuters and we know that Metrorail can be overcrowded, so we said that, when government does that, they must consider the risk and then they must not compromise the lives of people.

“If we move blindly because we are putting the economy first, there will not be an economy. We are going to lose the very same people we want to drive the economy,” he said.

Nedlac business convener Kaizer Moyane told City Press that business was ready for level 3 and has asked government to draw up regulations that ensure all stakeholders are protected.

“The lockdown is damaging to the economy, so we are happy that there is a sense for government to progress swiftly through the lockdown levels and reopen the economy,” Moyane said.

Western Cape first off the blocks

The Western Cape, which has the most confirmed infections in the country, was the first to announce its intentions to move the entire province to level 3, saying the same should happen across the country.

Western Cape Premier Alan Winde told City Press that being at level 3 would “allow us to open up more of the economy in a responsible manner to ensure that the economic pressure, which has resulted in a massive humanitarian crisis across the country, starts to ease”.

Read: WC gears up to move to level 3, despite being SA’s epicentre of Covid-19

“There is a very fine balance between protecting our people from the virus and protecting them from extreme hardship that a humanitarian disaster will bring,” said Winde.

The province’s advanced “bushfires” approach to screening and testing would be a litmus test for its readiness to deal with the virus.

“We have therefore devised the hotspot plan to specifically deal with infections where they are occurring. This plan is detailed, focused and involves departments across the Western Cape government all working towards ensuring that the infections are slowed,” he said.

As the province with the second-highest number of confirmed Covid-19 infections and the economic hub of the country – it is responsible for 40% of GDP – the move to level 3 is inevitable.

Premier David Makhura’s spokesperson, Vuyo Mhaga, said that if all the provinces except Gauteng were opened up for activity, you have “technically taken the whole country to level 4 because Gauteng is the economic hub”.

Gauteng does not believe the district model would be suitable, as inter-region travel is the norm because people stay in one city but work in another.

Mhaga emphasised that the regions in Gauteng are also quite close to one another, which makes it even tougher to isolate them.

He explained that the move to level 3 comes at a tough time for the province, which has just released information showing that the virus has reached townships.

We need to ready ourselves for how we are going to operate the transport hubs and to ensure that, at least as they move to the townships and back, they are not transporting the virus
Geoff Makhubo, City of Joburg Mayor

However, City of Joburg Mayor Geoff Makhubo told City Press that he had articulated his misgivings about the quick relaxation to level 3 to provincial government.

Makhubo’s concern mainly involves the lack of readiness of the transport system and business, as well as the exclusion of the township economy.

“We need to ready ourselves for how we are going to operate the transport hubs and to ensure that, at least as they move to the townships and back, they are not transporting the virus.

“Our transport hubs do not have the necessary or efficient sanitising areas like booths, and social distancing is not completely observed. They are not orderly like at the Gautrain stations or the airport.”

Makhubo believes provision must be made by business for the possibility that some workers might be late for work as taxis and buses have to abide by social distancing regulations and therefore cannot fill all their seats.

There is a general air of confidence in KwaZulu-Natal that the province is ready to move to level 3 of the national lockdown, but there is also fear that, with the increased movement of people, the eThekwini Metropolitan Municipality could quite literally infect the rest of the province.

The eThekwini and neighbouring KwaDukuza municipalities, which were singled out earlier this week by Health Minister Zweli Mkhize as areas of concern, account for about 85% of all Covid-19 infections in the province.

Rural areas have experienced no new infections since the middle of last month.

Premier Sihle Zikalala told City Press that he was confident the province could move to level 3, which would include the reopening of bottle stores under certain conditions.

Read: Political parties unimpressed by Ramaphosa’s speech and DA takes to the courts

“The province has built enough capacity to handle more cases if there were to be an escalation of infections. We have about 5 700 beds for quarantine and isolation purposes. However, getting to level 3 should not take away measures to prevent the spread. Testing must be compulsory in all workplaces,” said Zikalala.

As for the fate of eThekwini, Zikalala said it was “part of the entire provincial strategy”.

The leader of the opposition in the KwaZulu-Natal legislature, the Inkatha Freedom Party’s Velenkosini Hlabisa, said that any move to level 3 needed to strongly consider tighter regulations in eThekwini.

Limpopo believes the return of mine workers has resulted in the increase of Covid-19-positive cases in the province and would rather have districts that are home to mines remain under strict lockdown.

Provincial spokesperson Kenny Mathivha said the province would this week recommend to the Covid-19 command council that three districts identified as virus hotspots remain at level 4 of the lockdown.

Mathivha said one of the districts was Capricorn, which covers Polokwane, Sekhukhune and Waterberg.

We have discovered that the positive cases are imported … before mine workers came back, Sekhukhune did not have a single case.
Kenny Mathivha

“Since the ramping up of mining operations to 50%, the numbers of Covid-19 cases have gone up. We have discovered that the positive cases are imported … before mine workers came back, Sekhukhune did not have a single case,” he said.

“Two other districts, Vhembe and Mopani, can move to level 3, and the rest will continue to be monitored and regulations enforced to ensure that the virus does not spread and that infections are contained.”

The Limpopo health department yesterday announced that 13 mine workers had tested positive in the province.

Early last week, the provincial health department attributed the “rapid rise of Covid-19 cases” to the “transition from level 5 to level 4, interprovincial window period movements and, most critically, the resumption of operations by mines, especially in Sekhukhune and Waterberg”.

North West, which had recorded 63 cases by yesterday morning, has also cited the resumption of mining activities as a contributing factor to the increase in cases.

The Bojanala district, which covers the mining areas of Rustenburg and Brits, was the epicentre in the province, accounting for more than half of the total number of cases in North West. Rustenburg was leading the district with 24 cases.

North West Health MEC Madoda Sambatha said the reasons for the increase in this district were the “increased number of people coming back to the district with the reopening of businesses, with mines having brought back more than 50 000 people from other areas, including high-risk provinces”.

He also cited “increased screening and testing following the continued movement into Gauteng by people who go to work in Gauteng and back to their homes in North West”.

Free State Health MEC Montseng Tsiu said the easing of the lockdown should be done gradually.

“We accept going to level 3. We are indeed concerned about the health of the people, but we are also looking at the economy because, if it goes down, some people might lose their jobs, which will cause problems for the country.”

She said the plan was to keep Mangaung, the epicentre of the province’s outbreak, on level 4, while other parts of the province would move to level 3.

Related Links
Prepare for level 3 of lockdown, but only for certain areas
After lockdown things will not return to the way they were – Ramaphosa
Radical economic transformation best for SA post-Covid-19, says Ramaphosa
Share
Next on City Press
ANC warns SABC not to cut jobs because it will embarrass the party, cost it votes during elections