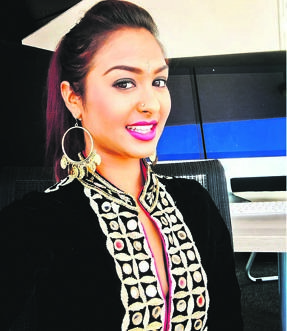 In June rising radio star and actress Mishka Gounden was heading to work at her dream job at Lotus FM when she received a call from a colleague who advised her to pull the car over. Sexy videos she’d taken of herself and sent, she says, only to the popular radio jock and a former colleague she had a bit of a crush on, Fahim Jamadar, had surfaced on WhatsApp and were spreading like wildfire through Durban’s conservative Indian community.

Hysterical, Gounden turned the car around and drove home. Before her mother could get there, Gounden found a box cutter and slashed her wrists in despair.

Just as everything was going right for the 24-year-old beauty, it was all falling apart.

Having risen through the ranks of online station Megazone Bollywood, she was now the on-air traffic reporter on the afternoon drive show at SA’s biggest Indian station. And her year had started with her being cast as party girl Mira on the e.tv drama Imbewu.

Four months later Gounden is fighting back after having been relentlessly sex shamed. She says Jamadar asked her to send the videos in 2016 when it seemed they were developing a romance. She didn’t know, she says, he was married with children and blames herself for acting foolishly. She says the videos have all but destroyed her good name.

I can’t apply for jobs because people think I’m a skank or a slut who sends videos to all sorts of people ... It’s only now I’ve started becoming confident walking out in public. If I had to go to an Indian place people would look at me and ... ask if I’m the sex video girl
Mishka Gounden, radio personality and actress

She’s retained a lawyer, Yugan Naidu, who is taking the SABC to the high court after she lost her job at Lotus FM on July 16. Naidu says station manager Alvin Pillay did not hold a formal hearing or serve a letter notifying Gounden she had breached her freelance contract before terminating it for bringing the SABC into disrepute.

Gounden has also obtained an interim protection order against Jamadar, which includes the allegation that he assaulted her outside a Durban bar and restaurant, and has opened a case of crimen injuria, accusing him of leaking the private videos.

Jamadar strongly denies her claims, both in his answering affidavit and to City Press. He accuses his former friend Santosh Beharie of conspiring with Gounden. Beharie was programme manager at Lotus FM for a decade until, also in July, his contract was not renewed. He is taking the SABC to the Commission for Conciliation, Mediation and Arbitration. Said Jamadar: “It has become more than evident that Ms Gounden and her rumoured boyfriend Santosh Beharie have conspired against me. She sent out these videos to numerous people sometime in 2016/2017, who have since come forward and confirmed this. However, without any evidence at all, [she] has accused me of making the videos viral now after Beharie lost his job. It is no mere coincidence that these allegations were lodged when Beharie’s contract was not renewed and there was talk about me filling the position.”

"Mr Jamadar is delusional ... He is still intent on dragging my name down with him instead of making amends. He has made Ms Gounden suffer enough and now wants to exacerbate her pain and suffering by publicly lying that I am her rumoured boyfriend, conspiring with her against him ... It was he who, together with the online rag Indian Spice, created the narrative that Ms Gounden leaked the videos to me to secure a job at Lotus FM," Beharie said.

Gounden is also seeking a harassment order against Naufal Khan, editor of Indian Spice, a website that reported on the video scandal and on allegations the videos were used as a sex-for-jobs ploy by Gounden to get Beharie to hire her.

Khan, says Gounden, has evaded the police and did not appear in court for the hearing. The matter is now scheduled for November 15. Khan says he stands by Indian Spice’s reports.

“The broadcaster as a state entity and its employees are open to scrutiny in the name of public interest. Where there have been allegations of abuse of power within the station, we have formally approached the station and the SABC to comment. However no employee or spokesperson has ever given us clarity.”

He is not willing to reveal the source of the leaked videos, saying: “The two videos were brought to our attention last year and, in the interests of the victim, Indian Spice protected her name.”

Beharie told City Press: “It is laughable that Khan reported that I solicited sex for jobs at the already beleaguered station. He’s fully aware of the lies he has published and the lives he thinks he has destroyed. She was hired after being interviewed by a panel of four managers, including HR, which is the normal procedure when hiring freelancers at the SABC. Let the courts be the final arbiter in this matter.”

Khan says he reported on allegations, not facts, and told City Press:

We do not have faith in the authorities currently and will work via our legal counsel and the South African National Editors’ Forum to ensure that our reporting is not hindered. We believe the various legal options are tactics to silence us on reporting the #MeToo allegations ...

Early next week, says Naidu, Gounden will be bringing a civil action against Jamadar, asking for R1.5 million in damages for defamation. They then plan to open an assault case.

The assault, says Gounden, happened during a disagreement with Jamadar in the parking area outside the smoking section of the restaurant on April 1.

She says Jamadar slapped her twice softly and, when she kept questioning his character, “slapped me so hard my whole body twisted”.

Jamadar says she is making this up, that he never hit her.

Two staff members working that night, however, have told City Press that they witnessed the immediate aftermath of the assault, with Gounden entering the smoking area stunned and then in tears while Jamadar strode to his car on the street outside.

Beharie is at [the establishment] on a very regular basis, so it would not be impossible to get some of his friends at the establishment to concur with Gounden’s made-up story.

He pointed to a log of WhatsApp messages between him and Gounden to prove their relations were friendly after the alleged assault. But Gounden says her affidavit got the dates wrong as she was in a state. She points out that the messages sent to City Press differ from those attached to his affidavit, accusing him of editing the texts in his affidavit.

He counters by saying his phone was stolen and these messages are all he was able to retrieve digitally.

Beaten But Not Broken

There are numerous other scandals brewing around Lotus FM which, badly affected by former SABC chief operating officer Hlaudi Motsoeneng’s 90% local music quotas in 2016, has continued to bleed listeners, with only 158 000 left, according to August’s Broadcasting Research Council figures.

In September former Lotus FM star presenter Vanessa Govender launched a #MeToo book, Beaten But Not Broken, in which she details excruciating and repeated assaults and a case of forced sex at the hands of her partner, much occurring at the Lotus offices. She describes the man but does not name him. Durban society has been buzzing with speculation that the man may have been Jamadar. Vanessa Govender on the cover of her book

But four well-placed insiders have told City Press they believed Govender and Jamadar were involved in a “violent” or “turbulent” relationship at the time.

Govender was not willing to comment this week, but Jamadar strongly denied the claims, saying the sources must have been “coaxed”.

“We were friends but we weren’t in a romantic relationship ... I have not read the book, but from what I have heard about it, she is definitely not speaking about me as what was said to me never transpired ... She apparently makes reference to things that transpired at the SABC and I was not there from 2002 to 2004 so was not privy to what was happening.”

According to reports, however, Jamadar was fired from Lotus in July 2002 for not following on-air procedures, returning from December 2004 until 2014. He started at the station in October 1998 and Govender late in 1999.

Next week City Press will report on a startling dossier about Lotus FM allegedly compiled by almost three-quarters of its permanent staff.

It includes accusations of sexual harassment by station manager Pillay and another senior manager, claims of autocratic leadership, attempted spying, rate disparities, favouritism and victimisation of staff, who are split in two camps, as well as an astonishing claim of a desire by a cartel to acquire the station privately.

Sources say many of the sexual misconduct claims have been reported to the SABC’s commission of inquiry announced in May.

In response to detailed queries, SABC communications boss Neo Momodu said: “The SABC has noted with concern the allegations and the corporation takes [them] very seriously. The SABC is currently conducting a forensic investigation on various allegations at Lotus FM and the outcomes of the investigation will shed light on the veracity of the claims made and provide recommendations to management.

“It is public knowledge the SABC instituted a high-level commission of inquiry into sexual harassment, headed by an independent commissioner, urging aggrieved parties to approach the commission.

The current work of the commission will be concluded following the closing date for submissions on October 31.

“Management is aware of the challenges that Lotus FM is facing and necessary steps are being taken to ensure stability.”

We live in a world where facts and fiction get blurred
In times of uncertainty you need journalism you can trust. For only R75 per month, you have access to a world of in-depth analyses, investigative journalism, top opinions and a range of features. Journalism strengthens democracy. Invest in the future today.
Subscribe to News24
Related Links
A new road to recovery for abused, raped or depressed women
Wife laughs as rape survivor testifies in Omotoso rape trial
South Africans unite to raise over R100 000 for Dros rape victim
Next on City Press
Government responds to EFF demand to be allowed political gatherings

Read more on:
sabcassault
Podcasts
Podcast | How to select the right exchange traded funds in this crazy market