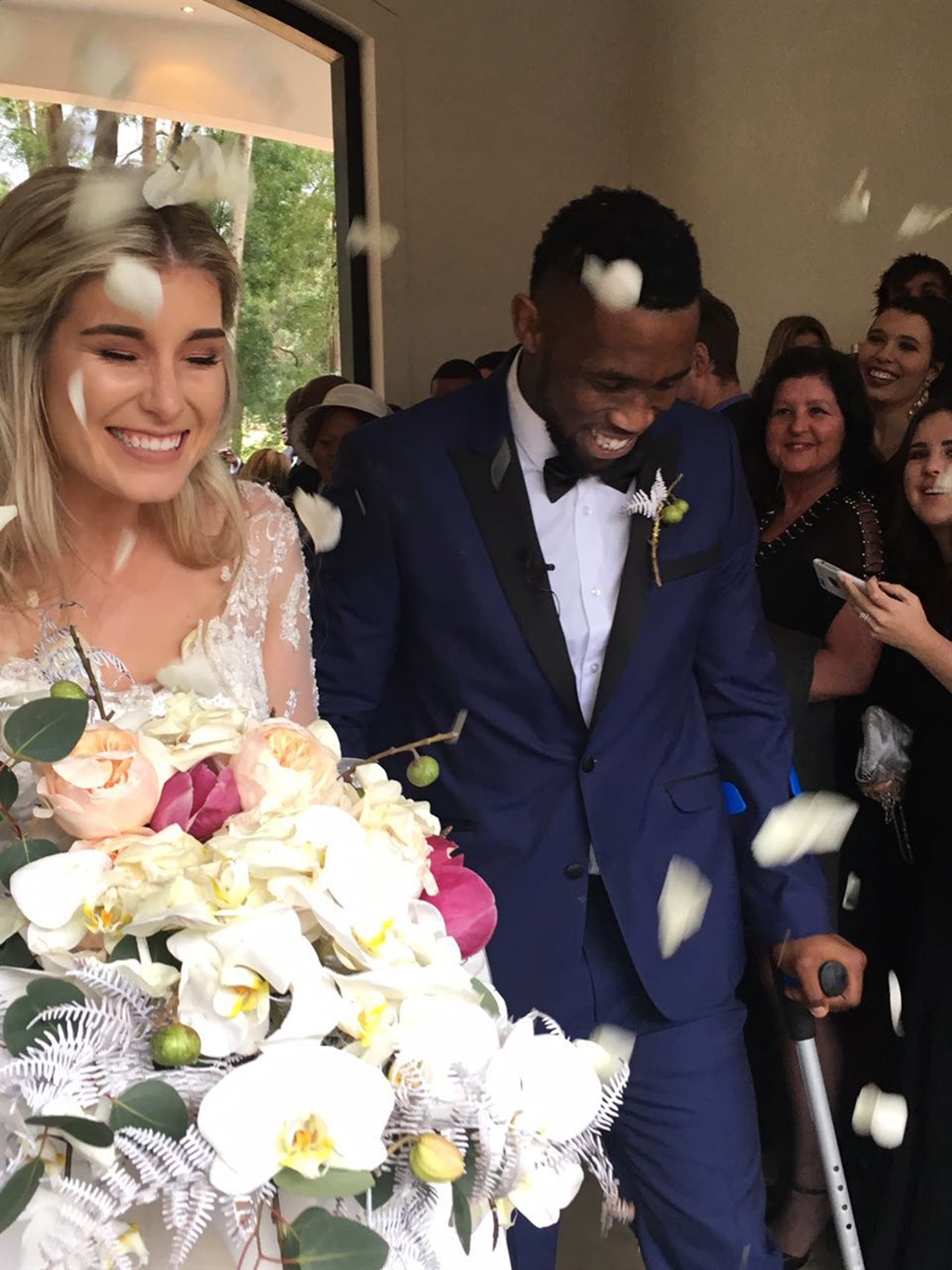 After four years of romance, Bok flank Siya Kolisi and his fiancée Rachel tied the knot in a Cape vineyard

On crutches, Springbok flank Siya Kolisi hobbled and joked while dancing with his new bride, Rachel, after they tied the knot at an A-list Boland wedding in the Western Cape last Saturday.

Amid vineyards and oak trees at Molenvliet Wine estate near Stellenbosch, Rachel (26) and Siya (25) glowed while opening the dance floor to Michael Bublé’s A Song For You.

Guests who looked on as the couple swayed under a massive crystal chandelier included fellow rugby star Tendai “Beast” Mtawarira and his wife, Kuziva Makore.

“Of course, Siya is still on crutches, which made our first dance very creative,” Rachel told City Press this week.

“Being the joker he is, he actually threw the crutches away while we were dancing. It was extremely amusing.”

Earlier, the pair’s son, Nicholas (2), looked on as his parents exchanged vows.

Siya was very emotional while I was walking down the aisle, as was I. He described it as like seeing me for the first time again
Rachel

Rachel was radiant in a fitted Chantilly lace bodice and tulle gown by Habits founder Jenny le Roux, while Siya donned a midnight-blue suit with a black silk bow tie. The bride walked down the aisle holding a pink-and-white rose bouquet with orchids.

“Siya was very emotional while I was walking down the aisle, as was I. He described it as like seeing me for the first time again,” Rachel said.

“I was a bit teary during our vows, as was everyone else in the room. Siya managed to hold it together.”

The pair were married by Pastor Phil Dooley of the Hillsong Church in Cape Town.

Another witness at the black-tie wedding was Michele Burger, wife of rugby sporting hero Schalk. She wished the couple well in an online post: “Mr and Mrs Kolisi. So proud of these two – thank you for sharing your magical journey with us.” 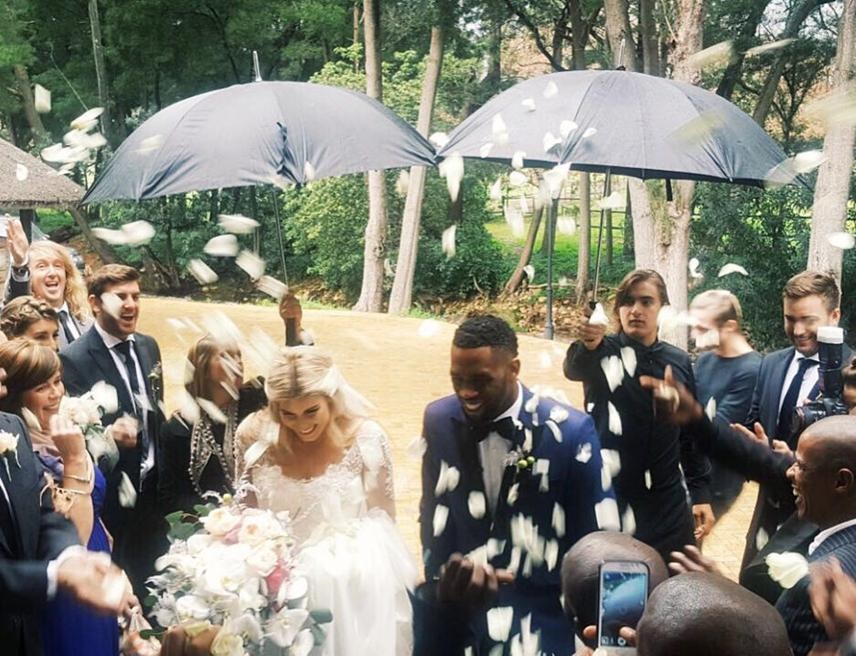 Love is in the air for Siya Kolisi and Rachel Smith. Picture: Justin Davis

Both hail from the Eastern Cape: Rachel from Grahamstown and Siya from Zwide township in Port Elizabeth. They fell in love four years ago, after meeting at a dinner party in Stellenbosch.

Siya’s childhood was tough, but relentlessly practising rugby paid off. At the age of 12, he was awarded a scholarship to the prestigious Port Elizabeth school Grey Junior and later to Grey High School.

Two years ago, Rachel and Siya took custody of his half-siblings, Liyema (14) and Liphelo (9), who were living in Port Elizabeth. The five-member family now lives in the Cape Town suburb of Pinelands. Rachel is a marketing executive turned full-time mother.

The wedding took place on Liphelo’s ninth birthday – and guests paused to sing to the youngster, who wore a white lace dress.

“They both [Liyema and Liphelo] ripped up the dance floor. There was a huge circle around them while they were dancing,” said Rachel.

“Nic was so overwhelmed by having so many people around that, unfortunately, he left early. But he looked extremely handsome in his little suit.” Siya Kolisi and Rachel Smith on the dance floor after taking their vows. Picture: Justin Davies

Fullback Cheslin Kolbe, a member of the SA Sevens team that just clinched bronze at the Olympic Games in Rio de Janeiro – and who is a cousin of gold medal winner Wayde van Niekerk – was supposed to be Siya’s eighth best man, but could not make the wedding because of Olympic commitments.

Yesterday, the couple jetted off to Zimbabwe for a short honeymoon. “We are going to Victoria Falls. We are extremely excited. We have a dream to travel to all the African countries. Our honeymoon is a good start,” Rachel said.

They plan to have a traditional wedding in the Eastern Cape soon.

On their wedding website, Siya recounts courting Rachel: “I knew I liked her and had to tell her. It was scary ... She played hard to get in the beginning, but eventually admitted it as well. The rest is history. We have a beautiful family and I can’t wait to spend the rest of my life with her.” The in love couple on their wedding day. Picture: Picture: Justin Davis
We live in a world where facts and fiction get blurred
In times of uncertainty you need journalism you can trust. For only R75 per month, you have access to a world of in-depth analyses, investigative journalism, top opinions and a range of features. Journalism strengthens democracy. Invest in the future today.
Subscribe to News24
Related Links
Siya Kolisi gets his running start
Rugby, kids and romance for Siya Kolisi
Next on City Press
‘It starts with a slap but it’s not going to stop there’ as police fail women Choose a newsletter
Voting Booth
Former president Jacob Zuma's legal team has given the chairperson of the commission of inquiry into state capture, Deputy Chief Justice Raymond Zondo, an ultimatum. Either he recuse himself or Zuma will either prolong proceedings or exercise his right to remain silent
Please select an option Oops! Something went wrong, please try again later.
Zuma is undermining Zondo
64% - 543 votes
Zuma is within his rights
9% - 79 votes
Zondo has done a good job
27% - 233 votes
Previous Results
You and your credit
Sponsored | Can you pass a credit test?