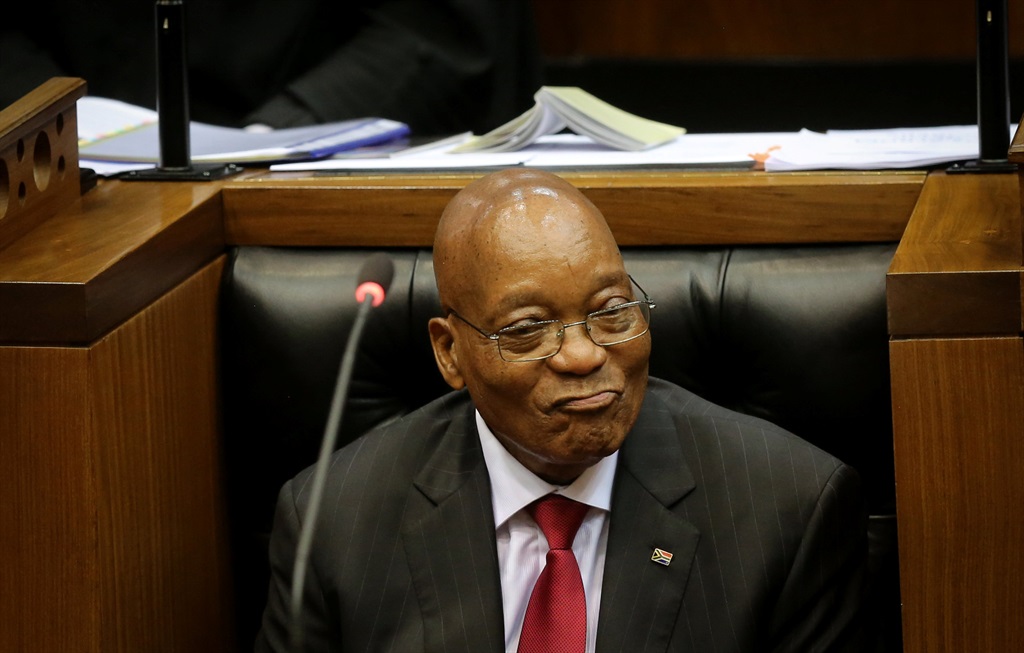 President Jacob Zuma during his state of the nation address in Cape Town on Thursday (February 9 2017). Picture: Sumaya Hisham/Reuters

Attention is set to move towards Finance Minister Pravin Gordhan’s budget in the next two weeks after President Jacob Zuma emphasised in his state of the nation speech that the government budget must from now on be used to drive the radical economic transformation programme.

After a now-familiar scene of disruptions, insults and violent confrontations in the National Assembly, Zuma was allowed to deliver a speech in which he sought to give meaning to the radical economic transformation message he has been preaching since last year.

He said radical economic transformation meant fundamental change in the structure, and system of ownership, management and control of the economy in favour of particularly poor South Africans.

Proceedings were disrupted for an hour as Economic Freedom Fighters MPs insisted that they would not allow Zuma to address Parliament because he had violated his oath of office.

The verbal sparring between the EFF and presiding officers Thandi Modise and Baleka Mbete eventually resulted in Parliament’s bouncers being called in to physically remove the MPs.

In his speech, Zuma painted a picture of how blacks were marginalised from meaningfully participating in the economy and vowed that this had to end.

“Twenty two years into our freedom and democracy, the majority of black people are still economically disempowered. They are dissatisfied with the economic gains from liberation.”

He said only 10% of the top 100 companies on the Johannesburg Stock Exchange were directly owned by black South Africans.

He added that the pace of transformation in the workplace and the implementation of affirmative action policies as required by the Employment Equity Act, was also quite slow.

In terms of the 2015-2016 information submitted to the Employment Equity Commission, the representation of whites at top management level amounted to 72% and African representation was at 10%.

“The skewed nature of ownership and leadership patterns needs to be corrected. There can be no sustainability in any economy if the majority is excluded in this manner. In my discussions with the business community, they accepted these transformation imperatives.”

He warned that government was now going to utilise “to the maximum” the strategic levers available to the state, including legislation, licensing, budget and procurement, to influence the behaviour of the private sector and to drive transformation.

Zuma said the R900-billion infrastructure budget and the R500 billion spent on goods and services must be used to drive transformation.

New regulations that make it compulsory for big contractors to subcontract 30% of business to black owned enterprises were gazetted last month.

Zuma acknowledged that the pace of land restitution was slow, adding that only 9.8% of the 82 million hectares of arable land had been transferred to black people.

He hoped that Parliament would move fast to rectify the Expropriation Bill, which was needed to pursue land reform and land redistribution.

The Bill has been referred back to Parliament for reconsideration on the basis that it might not pass constitutional muster due to inadequate public participation.

He appealed to land claimants to accept land instead of financial compensation.

“More than 90% of claims are currently settled through financial compensation, which does not help the process at all. It perpetuates dispossession and undermines economic empowerment.”

On current issues, Zuma said he instructed Health Minister Aaron Motsoaledi to ensure that the health ombud’s recommendations after the Life Esidimeni tragedy, in which 94 patients died after they were removed from the institution, be speedily implemented without any reservations.

He supported the ombudsman’s review of the National Health Act and the Mental Health 2002 Act with a view that certain powers and functions revert back to the national minister of health.

“Once more, we extend our heartfelt condolences to all families and relatives of the deceased,” he said.

We live in a world where facts and fiction get blurred
In times of uncertainty you need journalism you can trust. For only R75 per month, you have access to a world of in-depth analyses, investigative journalism, top opinions and a range of features. Journalism strengthens democracy. Invest in the future today.
Subscribe to News24
Related Links
From transformation to fees: 12 promises Zuma made in Sona 2017
Full speech: Zuma's Sona 2017
The only way to Save SA is to stop the Zuma nightmare – Pityana
Next on City Press
Tshitangano raises Eskom stakes