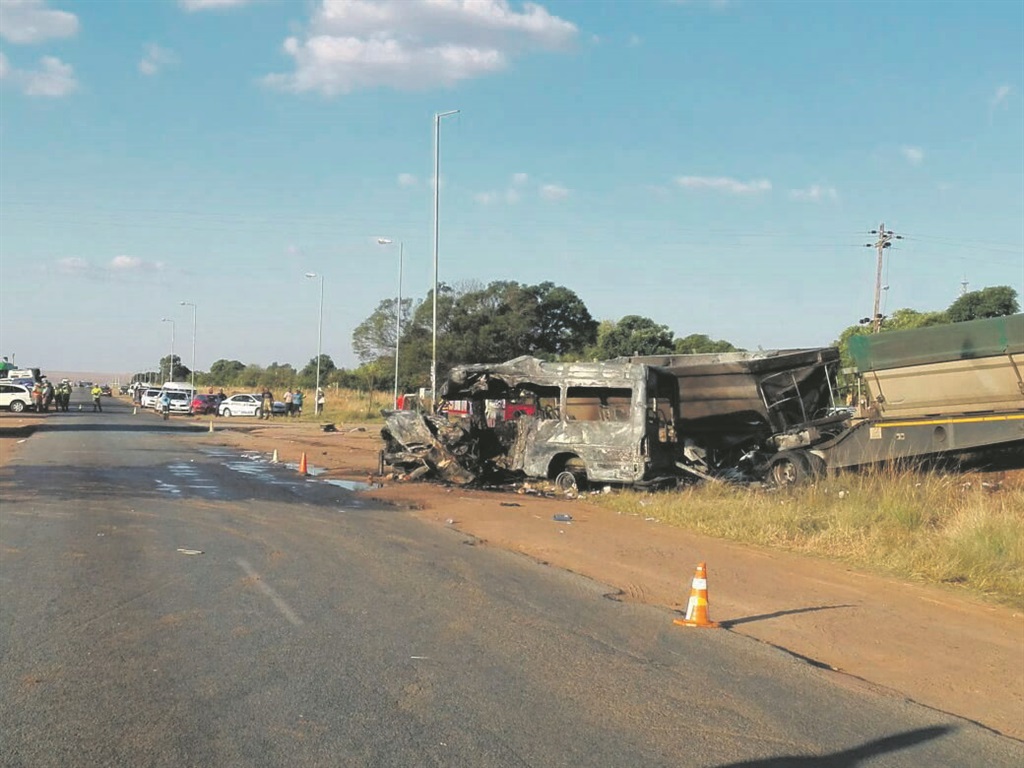 The aftermath of the blazing wreck of a taxi, which collided with a truck while transporting pupils home Picture: Simvuyele Mageza

Officials have visited the schools that the pupils who were tragically killed in a minibus accident on Friday used to attend.

The pupils were killed when returning home from school. Their minibus collided with a horse-and-trailer truck and caught on fire. The driver of the minibus was also killed.

Lesufi said that only one victim had been identified because they had been burnt beyond recognition after the taxi caught fire.

Mhlanga said the department would continue to support those affected by the accident. He said there had been offers from outside the department, including offers from private companies, to help with burying the victims and offers of financial assistance.

President Jacob Zuma offered his condolences to the victims and their families.

“This is a sad and painful tragedy, taking place just when the country is coming to terms with a number of lives that have been lost during the Easter weekend. On behalf of government and all South Africans we extend our heartfelt condolences to families of the learners, relatives and friends. May their souls rest in peace,” Zuma said.

He also called on the public to be “vigilant” and to “take safety precautions seriously”.

Many of the country’s pupils rely on minibus taxis to commute to school because they are an affordable means of transport,

“The recent accident is horrific – our statistics don’t tell a great story around child safety in vehicles. Unfortunately too few children are correctly buckled up and the options for transporting children when parents aren’t around are very limited with too many operators focusing on profits over safety,” said Tiffini Wissing, founder and managing member of Old School Cool, which was founded in 2009 and offers its “Cool Kids’ Cab” as an option for scholar transportation.

“We boast five million injury-free kilometres with children on board,”

To ensure safety, the vehicles are equipped with on-board cameras. There is also a tracking team to monitor the vehicles, and parents or guardians can receive SMS notifications about their child’s location. However, there is a fee to utilise this service, making it unaffordable for many South Africans.