May you not betray our people: Mogoeng cautions incoming parliamentarians 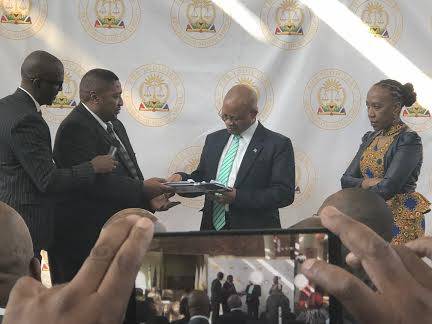 "May you not betray our people, those who died and suffered to ensure that you may be office bearers died so that all South Africans may enjoy a meaningful participation in the economy, freedom from all forms of prejudice and not that a minority may abuse the hard earned gains of independence."

This was the caution offered by Justice Mogoeng Mogoeng to politicians selected by their parties to represent South Africans in the National Assembly and the Provincial Legislatures.

Mogoeng made the remarks on Wednesday afternoon after he received, as per the dictates of the law - from the Electoral Commission of South Africa (IEC) - and handed over the lists of designated MPs and MPLs to the acting Secretary to Parliament, Baby Tyawa, in preparation for the first sitting of the National Assembly.

Mogoeng thanked the IEC for a job well done in the manner in which the commission facilitated last week’s national and provincial elections.

“I also want to pause and appreciate the IEC for a job well done, from the looks of things you’ve done well,” he said but went on to caution that since the IEC had held up its end of the bargain and ensured that South Africans continue to live in a democracy, it was now up to those whose names had made it onto the lists to do the same.

“The people of South Africa have spoken, they had elected those that they have confidence in not to betray the constitution of South Africa in spirit, object and purpose.”

“The challenges of this country have never been more pronounced and I can only plead with all those who are going to assume the responsibility as Members of Parliament and provincial legislature and those who are going to be members of the executive to never forget that right at the top they are called upon to recognise the injustices of the past and that they are yet to be eliminated.”

“We dare not be defocused from the primary responsibility of ensuring that our people do not continue to swim in the injustices of the past,” said Mogoeng.

He added that it seems like as a country, South Africa had “political justice”, the right to cast votes but was devoid of true liberation.

“Regardless of the fact that we gained the right to vote over 25 years ago, there still remains those among us who do not enjoy meaningful participation in the economy and freedom from all forms of prejudice, either racial, sexual or otherwise,” said Mogoeng. IEC chairperson Glen Mashinini, Judge President Monica Leeuw and Chief Justice Mogoeng Mogoeng at the constitutional Court of South Africa during the handing over ceremony of the list of politicians to represent the country in the national assembly andf provincial legislature. Picture: Juniour Khumalo

He said this was “a betrayal of the highest order” and needed to be addressed by the incoming sixth democratically elected Parliament.

The Chief Justice made the remarks at the Constitutional Court in Braamfontein.

Mogoeng confirmed that the first sitting of the National Assembly was scheduled for May 22nd when he will be presiding over the swearing in ceremony of MPs.

Handing over the list to the Chief Justice, IEC chairperson Glen Mashinini revealed that the list contained 830 names, 400 of whom were going to take up seats in the National Assembly while 430 will be heading to the provincial legislature.

Mashinini’s breakdown of the figures also revealed that Mpumalanga, with half of the members being women, was the province with the best gender parity ratio while the Western Cape with only 31% representation of women had the lowest.

We live in a world where facts and fiction get blurred
In times of uncertainty you need journalism you can trust. For 14 free days, you can have access to a world of in-depth analyses, investigative journalism, top opinions and a range of features. Journalism strengthens democracy. Invest in the future today. Thereafter you will be billed R75 per month. You can cancel anytime and if you cancel within 14 days you won't be billed.
Subscribe to News24
Related Links
IEC removes PAC candidate from party’s list for prior conviction
‘I’d rather be an entrepreneur’: Mahumapelo reluctant to go to Parliament
Next on City Press
Marikana workers plan to put Ramaphosa in the dock in a civil claim