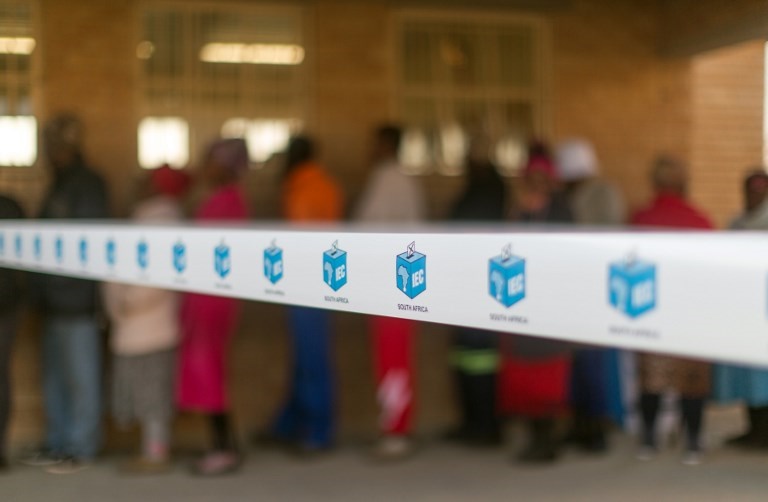 IEC tape around a voting station.

The Electoral Commission of SA (IEC) urgently needs National Treasury to approve a new registration machine to avert the crisis of a discredited local government election outcome in 2021.

A delegation of the IEC, led by chairperson Glen Mashinini, went through a baptism of fire this week when it faced the portfolio committee on home affairs of the sixth Parliament for the first time.

Members of the committee, which is chaired by advocate Bongani Bongo, who had been elected just hours before, took the IEC to task over allegations of double voting and faulty ink pens which nearly threw the May 8 elections into disarray.

The IEC told the committee that to overcome the challenges faced in this year’s election a number of legislative amendments and financial assistance were necessary.

The Inkatha Freedom Party’s Liezl van der Merwe said she was one of the voters whose ink mark disappeared within just hours of voting on May 8.

“I would agree with the view that if we don’t address these issues quite urgently and ferociously, then the 2021 election will be chaotic. I have attended many elections and this time around I think it was a disruptive election. There were chaotic scenes at that centre,” Van der Merwe told the delegation officials.

The commission’s deputy chief executive, Masego Shiburi, who described the May 8 polls as the “most disruptive elections organised by the IEC, said the IEC would be meeting with Treasury for a follow-up meeting to continue discussions around procuring a device to replace the “zip-zip machine”.

Shiburi said a suitable device had been identified, which would enable the voters roll to be updated in real time.

Electoral commissioner Mosotho Moepya told City Press that the commission did not want to divulge to the public the cost of the new device as it wanted to deal in good faith with Treasury.

“Allow us the space to have discussions with Treasury and to explore the options that are available to us in the context within which we are talking to Treasury. We understand that we are in a fiscally constrained environment. I think it is important to have those discussions in good faith and without putting undue pressure on either party,” he said.

Moepya said labelling this election as chaotic was too harsh.

“There was no chaos, I must say that. Yes, there was disruption.

“We are saying, and that is how confident we are, that claims have been made about double voting. We have no shred of that evidence, despite our standing invitation for that evidence to be bought forward. I am not saying to you that it doesn’t exist.”

Moepya insisted that even in the absence of evidence that pointed to double voting, the IEC was being proactive about preventing the offence from taking place in the next election.

“We refuse to allow ourselves to get to a point where the outcomes of an election are waived because we did not act when we should have.”

Another challenge that arose for the IEC this year was the number of registered political parties. The commission had to redesign the leaderboard at the results centre and the layout of ballot papers to accommodate 48 parties on the national ballot, with only 14 making it to Parliament.

“It is clear we are saying in this instance that something needs a reflection on. A total of 48 parties contested, only 14 made it to Parliament. Is that what it should be or is there something we need to do differently? I do not know,” Moepya said, adding that consultation with civil society and political parties would take place to find a way forward.

In his closing remarks, Mashinini flagged social media as presenting a challenge to the credibility of the IEC. He said pictures of ballot papers being put into ballot boxes during special votes created the impression that the election was rigged.

Was the May 8 election chaotic at your voting station? How can voting systems be improved heading into the 2021 local government election?

SMS us on 35697 using the keyword ELECTION and tell us what you think. Please include your name and province. SMSes cost R1.50. By participating, you agree to receive occasional marketing material

Read more on:
iecvotingelections 2019
MONEY MAKEOVER
Podcast | Mistakes to avoid with your own business