‘We fired at the ground’ – Police deny killing TUT student The CCT-Towers residence at TUT’s North Campus. Roads have been blocked and the students have marched to the police station. Picture: Nompumelelo Magagula/City Press

Police have denied shooting and killing a student at the Tshwane University of Technology’s Soshanguve North Campus.

This follows the violence that erupted during the Student Representative Council (SRC) elections on Thursday afternoon.

The student who is said to be a member of PASMA was allegedly shot in the head and died in an ambulance en-route to a hospital on the R80.

According to the report which the SA Police Service gave the Independent Police Investigative Directorate (Ipid), police were called to the campus after the presiding officer was allegedly held hostage and assaulted by the students.

Ipid has visited the scene and is investigating the matter.

“The police reported that they fired at the ground with R5 rifles and that when they left no one was injured but police vehicles were damaged. The police were later informed that a student had been shot and injured,” Ipid spokesperson Moses Dlamini said.

“Police firearms were seized for ballistics testing. The post mortem will be held [on Friday] at Ga-Rankuwa mortuary. The docket will be collected for further investigations.”

Police reportedly fired shots at the “unruly” students who were fighting over the alleged smuggling of fraudulent ballot papers during the elections.

All the ballot papers were burned by the students and the elections were cancelled. SRC president, Katlego Mokgobole, said they were disappointed and devastated about the situation.

He said the campus would be shut down until they find out who was responsible for shooting “one of their own” and until he was laid to rest.

“The police saw that they shot a student but they never attended to him. If the police claim that they did not shoot the student, there is a cartridge that we have and it shows that the gun that was used is an R4 and only police officers use an R4. If the police are disputing that they are the ones who did it, then we are requesting Ipid to come and make an investigation,” said Mokgobole.

Videos have been making rounds on social media showing angry students throwing chairs at each another in a hall that was supposed to be used for the elections. Another video showed about 10 police vans inside the institution’s premises – shots were fired and students were screaming while running away.

Students have burned campus buildings and a car that belonged to a security officer following the incidents and they also damaged the newly renovated TUT FM broadcasting studios about a month ago.

Academic activities at both Soshanguve North and South campuses were cancelled for Friday. Meanwhile, Parliament’s Portfolio Committee on Higher Education and Training welcomed the “expedited forensic investigation” into the killing of the student.

“Police should at all times practise restraint and caution at campuses when it comes to confrontation with students,” committee chairperson Connie September said in a statement on Friday.

September “cautioned university management to avoid calling in the police in situations until conciliation avenues had been exhausted, but also said the university needed to report back to the committee on findings of what had transpired”.

“The committee will ask student representatives to also explain as well as refer the matter to Portfolio Committee on Police to assist with investigations,” the statement read. 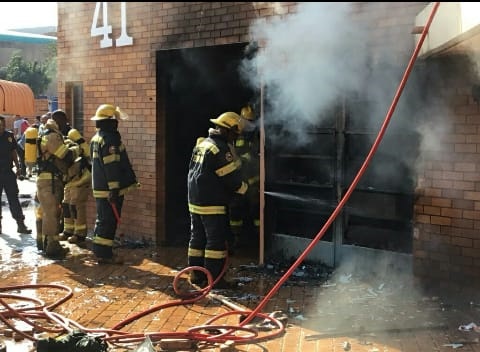 Firemen put out a fire at a university building that was burned by students. Picture: Supplied
Share
Next on City Press
Orange Farm community seeks Cele’s intervention

Read more on:
tut
ON MY RADAR
for subscribers
On My Radar | Take care as you step into the metaverse