What is VBS Mutual Bank? Everything you need to know VBS Mutual Bank shot into national prominence following a City Press report that the bank granted President Jacob Zuma a loan to finance the R7.8 million he owed relating to the upgrades of his private residence in Nkandla. Other than this, very little is known about the bank.

Unlike commercial banks such as FNB, Absa, Nedbank, Capitec and Standard Bank, mutual banks are much smaller and do not offer a full bouquet of banking services. Mutual banks, which are regulated by the South African Reserve Bank through the Mutual Bank’s Act of 1993, are aimed at encouraging a culture of savings. The biggest difference between commercial banks and mutual banks is that depositors who save in the latter become shareholders with voting rights during annual general meetings.

Over and above VBS, there are two other mutual banks in South Africa: Ithala Development Finance Corporation Limited and Finbond. VBS was established in 1982 as the Venda Building Society. It became a mutual bank in the early 1990s. Most of VBS’ clientele are in Limpopo.

Last week City Press reported that VBS had approved a R136 million loan to Tshifhiwa Matodzi and Robert Madzonga, who are the bank’s respective chairperson and chief operations officer. The two are directors of a company called Vele.

We reported that they loaned the money to acquire a 54% stake in Afric Oil, a company owned by the Pembani Group.

The bank has denied extending a loan to Vele, and that Madzonga is its chief operations officer. In a interview with Power FM on Monday, the bank’s chief executive Andile Ramavhunga said Madzonga was a “consultant”.

Other than the conflict of interest and the fact that Vele’s loan was not approved by the bank’s board, a source inside the bank told City Press that the biggest problem was that the R136 million represented about 22% of the bank’s total deposits. This, he said, was illegal and forbidden by the Reserve Bank.

Questions have also been asked about the timing of Zuma’s loan and his decision to crown vhaVenda King Toni Mphephu Ramabulana. Ramabulana is one of the bank’s major shareholders.

Early this month Zuma announced that he would crown Ramabulana king.

However, the proceedings were halted, through court action, by Princess Masindi Mphephu Ramabulana, who claims she is the rightful heir to the vhaVenda dynasty. 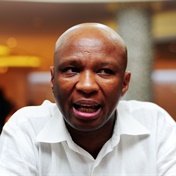