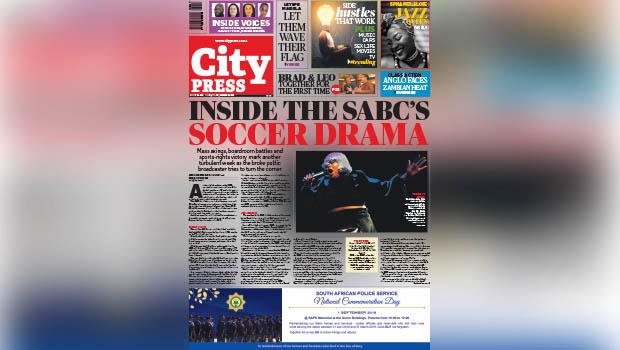 Here are some of the headlines in your City Press newspaper this week:

Fugitive bishop name dropped Ramaphosa for cash: Controversial fugitive Mpumalanga bishop Hangwi Maumela has been caught on tape bragging about his closeness to President Cyril Ramaphosa and then allegedly conning a desperate Emalahleni businessman out of R100 000.

Odwa Shweni film shocker: The actor’s family has threatened to interdict the film makers, who are completing the film that led to his tragic death.

Women revolt after Silwerskerm faux pas: Award-winning film director Jenna Bass boycotted the Silwerskerm film festival screening this week as she felt that a naked image being used as a marketing campaign at the innovative festival was challenging her personally as a woman.

IFP leader Buthelezi’s swangsong: With his handpicked successor installed, the long-serving leader’s advice to new leadership was for them to protect women and children.

ANC Gauteng not moving on gender battle: The ANC in Gauteng has dug in its heels, so far refusing to chop one male MEC to make way for a female one, as instructed by the party’s national executive committee.

Emails show De Lille’s party not doing too GOOD: Patricia de Lille is on a mission to clean up her ailing party’s national leadership committee. The party is swimming in debt.

Rite of passage nightmare: Parents are up in arms after their sons’ circumcisions were botched at the surgery of a medical doctor contracted to perform the procedures.

Raped by her uncle: A senior government official and choir manager at a prominent church in Gauteng appeared this week in the Pretoria Magistrates’ Court charged with raping his niece.

ANC playing dirty to keep 15 wards: The governing party is accused of buying votes by handing out food parcels and cash to residents of QwaQwa ahead of the by-elections on Wednesday.

Leo and Brad together for the first time: City Press secured an exclusive interview with DiCaprio, during which he talks about Pitt and himself working on the same movie for the very first time in their careers.