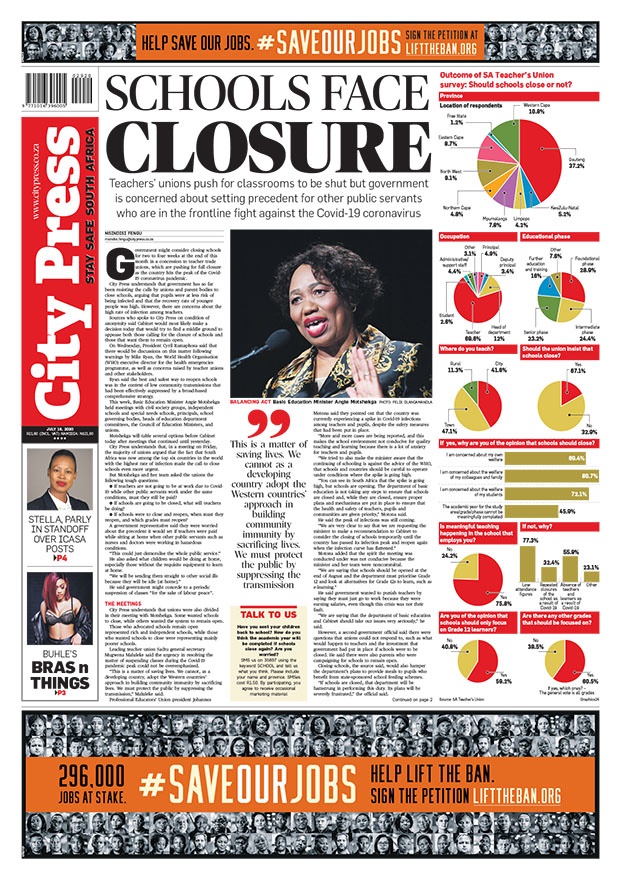 Here's what you can expect in City Press this week

Government might consider closing schools for two to four weeks at the end of this month in a concession to teacher trade unions, which are pushing for full closure as the country hits the peak of the Covid-19 coronavirus pandemic.

‘We will fight the ban’

Disgruntled alcohol manufacturers and restaurateurs will not take government’s U-turn lying down.

They are concerned about the retrenchments that will follow after the renewed ban on the sale of alcohol came into effect last week.

An Eastern Cape-based pastor has been accused of scamming a follower of close to R500 000 in a car deal that went sour.

A R3 million bribery scandal has led the EFF in North West’s JB Marks Local Municipality in Potchefstroom to expel one of its councillors and suspend another pending a disciplinary hearing.

Communications Minister Stella Ndabeni-Abrahams’s decision to exclude Kgosi Matthews from the short list of Independent Communications Authority of SA councillors is fuelling a rift between her and Parliament’s portfolio committee on communications.

Artists fume over nonpayment of royalties

While the Southern African Music Rights Organisation sits with undocumented works worth at least R165 million from the previous financial year, artists are crying foul over nonpayment of royalties.

Are Cindy and Bongani an item?

TV actress Cindy Mahlangu is rumoured to be romantically linked with Bafana Bafana and French side Amiens SC midfielder Bongani Zungu, who may be moving over to Scottish giants Rangers.

The SA Reserve Bank has received a letter requesting the VBS Mutual Bank licence be reactivated.

Hartland, the other half of SA

Sometime in 2024, marking the start of the new post-Covid-19 era, President Cyril Ramaphosa finds himself humiliated as he governs only half of South Africa.

The other half is now called Hartland, Africa’s 56th independent state under the control of minority communities including “white, brown and Indian population groups”.

Treasury has withheld the remaining equitable share and conditional grants for the Nelson Mandela Bay Metro in the Eastern Cape over the legality of the appointment of acting municipal manager Mvuleni Mapu because of serious charges he once faced.

Basic Education Minister Angie Motshekga says she has not lost touch with the reality faced by poor communities.

Motshekga, who has been widely criticised for resuming teaching and learning in schools during the Covid-19 coronavirus pandemic, says she grew up in the township and has not abandoned her roots.

Having taken up running at the age of 61, Chunkie Ntshangase never imagined that she would complete a 42km marathon at this stage in her life.

Four companies benefited from a tender windfall of almost R240 million after a Limpopo municipality awarded them the exclusive right to skip the tedious process of bidding for tenders.

Mpumalanga politician Lindiwe Ntshalintshali cost taxpayers R348 000 by staying in a hotel for about seven months because she was allegedly too finicky and rejected six houses that were allocated to her.

Curves and confidence: ‘You are perfect just as you are’

Actress Buhle Samuels believes that her partnership with lingerie brand Bras N Things will help other curvy women to embrace, love and celebrate their figures, and spoil themselves with lingerie that makes them feel comfortable and confident in themselves.

Former president Nelson Mandela’s call for “human solidarity” is vitally important given “the vast inequalities that have been brought to the fore by the Covid-19 coronavirus pandemic”, said UN secretary-general António Guterres, who yesterday delivered the 2020 Mandela Day lecture.

Putting exercise bikes in offices and urging employees to use them just twice a week could slash their risk of heart disease or diabetes, scientists say.

Emergency medical services (EMS) operating in the two Covid-19 coronavirus epicentres of Buffalo City and Nelson Mandela Bay in the Eastern Cape have testified to an increase in demand for their services since the second wave of the pandemic hit the province.

Frustrated, helpless and dejected – that’s how foreign-trained doctors desperate to register with the Health Professions Council of SA and help stem the Covid-19 coronavirus epidemic say they feel as they watch the health system and its workers struggle to cope with the mounting cases.

Allegations of political influence have cast doubt over the upcoming selection process for the National Youth Development Agency (NYDA) board.

The presidency and the department of public service and administration are not following legal advice to suspend Public Service Commission director-general Dovhani Mamphiswana.

Home brews are a no-no in Eastern Cape

Alcohol regulators in the Eastern Cape have cautioned people to refrain from selling and consuming home-brewed beer, some of which has killed consumers.

A real game of thrones as kings clash

Former abaThembu acting king Azenathi Dalindyebo has been accused of using the courts as a platform to insult his father, King Buyelekhaya Dalindyebo.

We live in a world where facts and fiction get blurred
In times of uncertainty you need journalism you can trust. For only R75 per month, you have access to a world of in-depth analyses, investigative journalism, top opinions and a range of features. Journalism strengthens democracy. Invest in the future today.
Subscribe to News24
Related Links
Maimane files affidavit in support of appeal challenging high court ruling on reopening of schools
Ramaphosa weighs in on schools, employment and gender-based violence through Covid-19 lens
Alcohol ban set to cause another spike in illegal and illicit trading
Next on City Press
Public sector deadlock: ‘It’s do or die’