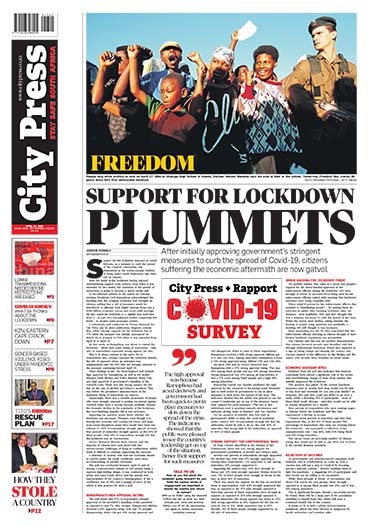 Some of the headlines in your City Press newspaper today:

Support for the lockdown imposed on South Africans, as a measure to curb the spread of the Covid-19 coronavirus, has plummeted as the socioeconomic realities of living under harsh restrictions take their toll on citizens.

With the initial 21-day lockdown having enjoyed overwhelming support from citizens, even when it was extended by two weeks, the extension of the period of restrictions is going to become a much harder sell.

As Covid-19 takes its toll on an already weak economy, a poll reveals that a growing number of citizens do not have the financial capacity to continue buying food and essentials.

Lower transmissions before restrictions are lifted

The restrictions related to the pandemic would only be eased further if the levels of transmission are lowered and the health system is more prepared.

This means more available beds and fewer people being admitted for treatment.

KwaZulu-Natal premier Sihle Zikalala’s decree that anyone who tests positive for Covid-19 will be taken to government-approved facilities to recuperate has been described as ‘authoritarian, dictator-like’ by eThekwini residents.

But in a telephone interview with City Press, Zikalala appeared to reverse the decree, saying that, while the state of disaster regulations allowed for forced quarantine, checks would be done to determine if individuals could self-quarantine before whisking them off to a state facility.

Assassination ordered, paid for by the police

The assassination of a police watchdog investigator at his farm in east Pretoria last month was ordered and paid for by the police, a hitman has alleged.

Serving up a solution on a table

How some are thinking out of the box to fit in with these social distancing times and remain relevant.

Local entrepreneur has designed a “auto phola table” that he says fast food outlets and things such as Uber Eats can use when delivering foods once lockdown restrictions are eased to promote social distancing which is likely to be with us for several more months.

How to steal a country

Incisive documentary How to Steal a Country has finally been released on Showmax for South Africans to watch.

Using interviews and plenty of archive footage, it puts together a devastating picture of how the Gupta-Zuma alliance stole about R1 trillion for themselves through state capture.

Law enforcement officials meant to be enforcing lockdown measures have turned villains, with more than 40 policemen arrested for breaking into bottle stores, stealing alcohol, inflating the prices and selling it to desperate citizens longing for the banned substance.

“We were left bare, with no roof over our heads. Why couldn’t they demolish our shacks knowing that they have an alternative place for us to go to?” ask residents of the Lakeview informal settlement in Lawley, southern Johannesburg, after the Red Ants demolished their homes this week.

Food prices in five supermarkets have skyrocketed, painting a gloomy picture for poor families who were not able to afford enough nutritious food even before the impact of Covid-19.

Statistics do not give an accurate picture of the plight of vulnerable women and children trapped in  violent homes during lockdown.

The incident in Boikhutso triggered a violent protest where an ambulance and two police vehicles were torched after the accident there.

Police said at least 17 people, including minors, were arrested for public violence and possession of suspected stolen goods after several tuckshops were looted during the protest.

Dukada family gets help from across the globe

A number of Good Samaritans have come forward to help an Eastern Cape family after a story by City Press touched many.

The Dukada family has received monitory/groceries donations from people from all walks of life including fundraising campaigns from readers from America who have pledged to support the family.

There are growing concerns around the handling of the Covid-19 pandemic in the Eastern Cape, resulting in Health Minister Zweli Mkhize being forced to intervene.

Plans to transfer offenders to other prisons shot down

The department of correctional services has dismissed talk of plans to transfer more than 600 offenders from overcrowded prisons in Limpopo to select centres in North West, saying such a proposal had not yet been given to national commissioner for correctional services Arthur Fraser for approval.

Limpopo has abandoned a ground-breaking initiative – telemedicine or telehealth – that could be useful as the world grapples with Covid-19.

In a short space of time, rapper Nasty C has become one of our best local exports – something his new record deal affirms. With the support of the local hip-hop fraternity, he now gears up to bring you an intimate concert tomorrow.

No special treatment for Uzalo

Producers of SA’s number one soapie, Uzalo, thought they had scored big when they were given the green light to start shooting, but were stopped in their tracks this week.

How Boity owns her throne

We speak to the bubbly entertainer and her mother about the experience of filming this show, the success it’s enjoyed as well as her plans to shine in the music industry.