Wits staff protest is crucial to the #FeesMustFall movement. Here’s why To have the support of some members of Wits staff is a big statement.

This is according to second-year social work student Fatimata Moutloatse.

“We may not have the resources, but we are adamant about our call for decolonised free quality education. It’s encouraging to see that these academics themselves support this,” she said.

What at first was a small gathering of few academics grew to be a crowd big enough to attract a water cannon police truck to the vicinity of the Wits University Great Hall. Staff and students sang and danced in solidarity.

The concerned staff started a public petition to remove police and private security from campus.

According to lecturer Dr Danai Mupotsa, the petition came after a group of staff at the university shared their experiences with one another in two separate meetings.

Moutloatse and student leader Busisiwe Seabe were among the group of students who joined the staff protest.

Seabe had red tape on her mouth – a symbol of the silencing of individuals on campus.

Moutloatse became visibly emotional and cried through some of the songs.

She said that her tears were tears of joy, not of sadness. 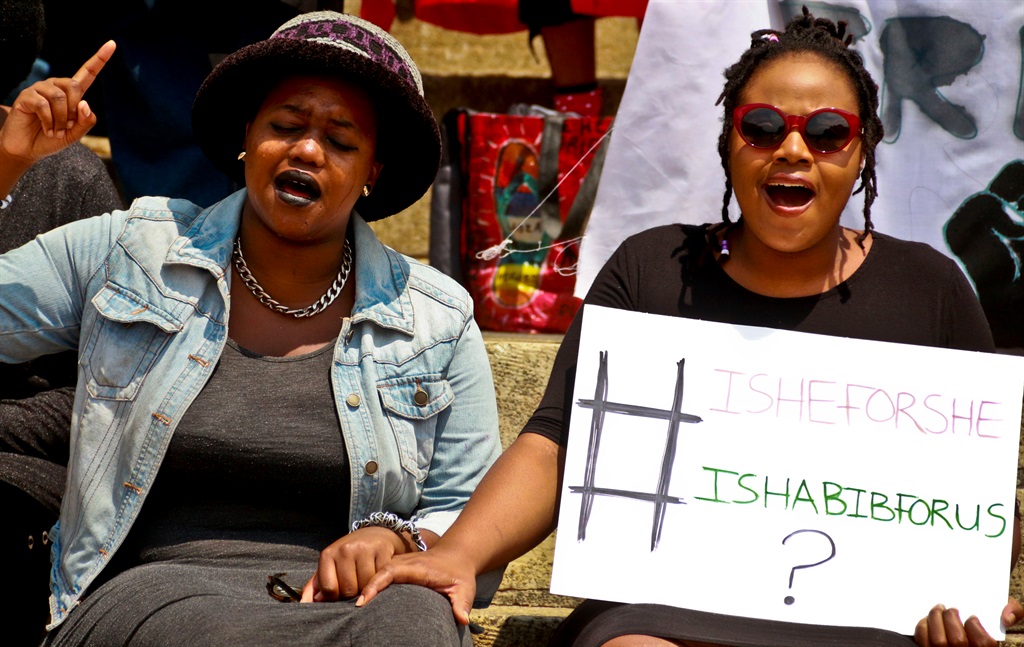 Moutloatse told City Press why it was important to have the staff support them.

“When we speak of a united front, this is what we mean because the issue of access to free education is not just one for students,” she said.

PhD student and lecturer Hlengiwe Ndlovu said she believed that having police on campus was the cause of violence.

“These protests started about four weeks ago but in the first two weeks there were no police on campus and we didn’t see these things of throwing rocks,” she said.

Ndlovu said students were frustrated with the response of university management but didn’t want to burn down buildings.

“I mean if these students really wanted to burn the buildings they would have done it by now,” she said.

She said the university needed to engage students properly instead of responding through police and private security.

The petition, which is on amandla.mobi, was read by history head of department, Professor Sekibakiba Lekgoathi.

Apart from the call for demilitarisation of campus, the staff also want vice-chancellor Adam Habib to engage students and concerned staff, to stop lectures taking place off campus because this would disadvantage those who can’t go and to better understand racism, classism, homophobia and sexism.

The workers said they had had enough of seeing “their children brutalised” by the police.

Deliwe Mzobe, who was among those protesting, said they decided to down tools yesterday after they heard of Dlamini’s arrest.

She said they had been part of the protests all along but protested without their uniforms on out of fear they would be in trouble.

Upon hearing of allegations that police were shooting at students inside their residence rooms over the weekend, they decided they would no longer hide their support.

“We felt that enough is enough we must support the students. Especially after we saw their pictures because we are on WhatsApp groups with the students and the academics,” she said.

They handed in their own memorandum to management which they were told would be addressed today.

They said they would continue to protest today and would gather at the court again in solidarity with Dlamini whose bail outcome was due this morning.

The outsourced workers also called for police to leave the university and had other demands.

Some of their demands included negotiation of a salary increase to R12 500, an investigation into the death of fellow worker Celumusa Ntuli, and a commitment by the university not deduct pay because of protests.

We live in a world where facts and fiction get blurred
In times of uncertainty you need journalism you can trust. For 14 free days, you can have access to a world of in-depth analyses, investigative journalism, top opinions and a range of features. Journalism strengthens democracy. Invest in the future today. Thereafter you will be billed R75 per month. You can cancel anytime and if you cancel within 14 days you won't be billed.
Subscribe to News24
Related Links
How my journey to a PhD in genetics convinced me that fees mustn't fall
Malema on Gordhan, his summons and #FeesMustFall
Yes, free education is possible. Here's how
Next on City Press
‘Use Enyobeni tavern tragedy to start conversations around alcohol with our children’ – psychologist