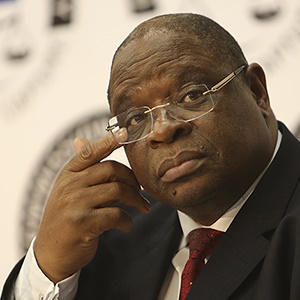 The chairperson of the commission of inquiry into state capture, Deputy Chief Justice Raymond Zondo.

The National Association of Democratic Lawyers (Nadel) believes the commission of inquiry into allegations of state capture is picking on black people.

Nadel counts many of South Africa’s judges as its former members, and plays an integral role in the Legal Practice Council (LPC), which, since November, has regulated all attorneys and advocates in the country.

Nolitha Jali, secretary-general of Nadel, this week gave feedback on resolutions made by the organisation’s national executive committee.

“On closer inspection, it appears the commission that is investigating state capture and corruption is only focusing on some high-profile politicians and executive managers – especially black professionals in senior management – who are publicly branded as corrupt,” said Jali.

Nadel is concerned that the Zondo commission is not focusing on other people and institutions that “facilitated corruption and state capture”, such as lawyers, accountants and financial institutions.

Jali said Nadel had decided to do an in-depth assessment of all the evidence heard at the commission, and to set up a list of 100 cases that had to be immediately investigated and monitored for prosecution.

“However, the law also has the tendency to mirror existing social mores, values and perspectives through legal processes. Applying racial and gender-neutral rules to complex and nuanced legal matters can have the unintended consequence and/or unintended message that black people, due to their elevation into high-level government positions, are corrupt.

"It is important that the law takes into account racially based stereotypes within our society, the narrow construction of difference, and how the law has historically responded to black people’s subordination and oppression.”

Sydow said that, in a country like South Africa, it was “careless to lead assumptions and perpetuate stereotypes that black people as a homogenous group are corrupt”.

At the same meeting, Nadel’s executive decided to fight the Cape Bar Council’s legal action in respect of transformation.

The Cape Bar wants quotas for the election of provincial councils of the LPC set aside because it believes that these lead to unreasonable consequences.

The Cape Bar wants a black woman, who received the fourth most votes in the election, to be appointed to the council, rather than a black man who finished far behind her.

However, the rules of the LPC require one of the council members to be a black man.

“It is astounding that, of all the professional bodies representing legal practitioners, only the Cape Bar has chosen to challenge the elections. The perception prevails that the Cape Bar, which is inherently untransformed, has no manifest intention to transform any time soon,” said Jali.

Nadel finds it absurd that the Cape Bar Council decided to participate in the elections, but is now questioning the rules.

Advocate Andrew Breitenbach, chairperson of the Cape Bar Council, said it supported transformation, but that the “rigid quotas are irrational and unreasonable”.

In the Western Cape Provincial Legal Practice Council elections in March, advocate Jeremy Gauntlett (a white man) received the most votes (164), advocate Karrisha Pillay (a black woman) was second with 162 votes and advocate Louise Buikman (a white woman) was third with 149 votes.

Advocate Ncumisa Mayosi was fourth (138), but a black woman had already been selected and therefore advocate Andre Paries (30) was appointed, as required by the quota system.

We live in a world where facts and fiction get blurred
In times of uncertainty you need journalism you can trust. For 14 free days, you can have access to a world of in-depth analyses, investigative journalism, top opinions and a range of features. Journalism strengthens democracy. Invest in the future today. Thereafter you will be billed R75 per month. You can cancel anytime and if you cancel within 14 days you won't be billed.
Subscribe to News24
Related Links
The Zondo commission wants to ambush and humiliate Zuma, says his lawyer
How Zondo implicated Zuma
Zondo denies Moyane the opportunity to cross-examine Gordhan
Next on City Press
Ambassador to the US and her son in 'witchcraft and attempted murder' claims