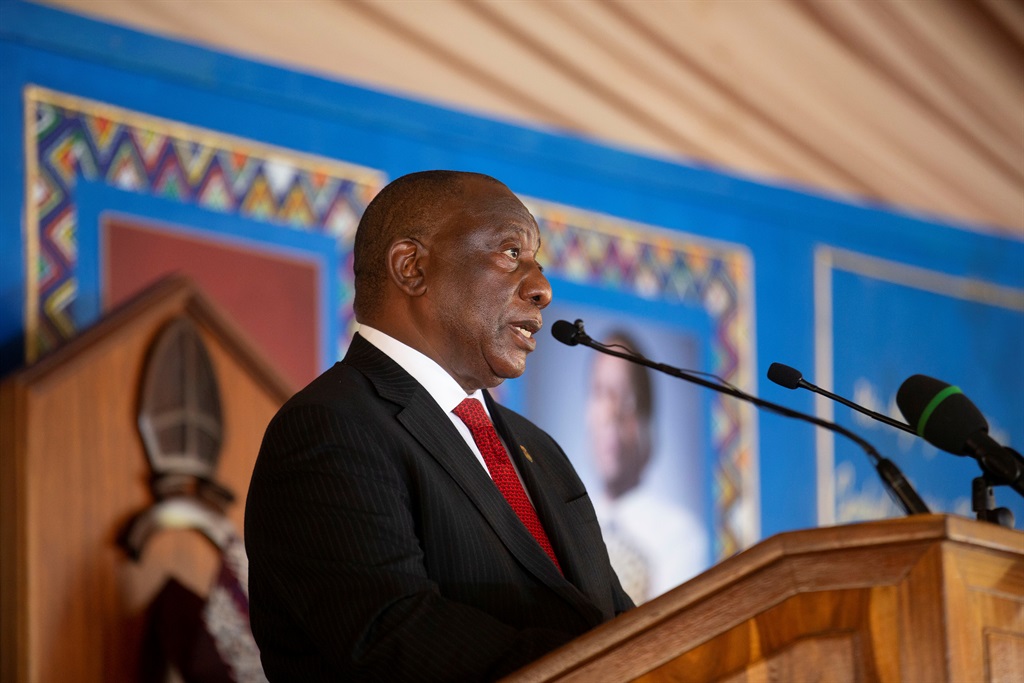 President Cyril Ramaphosa honoured late Zulu King Goodwill Zwelithini for reintroducing the culture of male circumcision (ukusoka) in the fight against the spread of HIV/Aids. Ramaphosa told mourners during the monarch’s memorial service in KwaNongoma, KwaZulu-Natal, on Thursday, that, in leading this life-saving project, King Zwelithini showed courage.

King Zwelithini reintroduced male circumcision in 2010. The practice had been banned among the Zulus during the reign of the nation’s founder King Shaka kaSenzangakhona, who would rather have young men participating in war than spending months undergoing the whole custom.

King Zwelithini (72) died in hospital on March 12 due to Covid-19 complications.

The monarch was buried in a private ceremony in the middle of Wednesday night, according to his wish. His state funeral was then turned into a memorial service.

King Zwelithini ruled for 50 years and was the longest-serving Zulu king in history. His reign straddled both the apartheid and democratic eras in South Africa and his role was largely ceremonial. He only had power over communal land under the Ingonyama Trust, which is about 3 million hectares of land or about 30% of KwaZulu-Natal.

Ramaphosa also said that the monarch had revived various cultural festivities, such as the reed dance and the ceremony of the first fruits, which proved that he was a repository of Zulu culture.

The president highlighted that Zwelithini had played a critical role in bringing about peace and stability in KwaZulu-Natal, together with former president Jacob Zuma and Prince Mangosuthu Buthelezi, the Zulu prime minister and founder of the Inkatha Freedom Party (IFP).

The fall of apartheid in the early 1990s bred political violence, particularly between the ANC and IFP, resulting in many deaths.

“He believed that the pursuit of violence was ethically and morally wrong,” Ramaphosa said.

The president described Zwelithini as a bridge-builder across the divide of race and culture, and said that this earned him respect throughout Africa because he valued diversity.

King Zwelithini reintroduced male circumcision in 2010. The practice had been banned among the Zulus during the reign of the nation’s founder King Shaka kaSenzangakhona

“I remember with fondness the conversations I had with him, whether they were about rearing cattle, culture or international matters. He was a champion for development and had deep insight,” he said.

Buthelezi said that the monarch’s legacy must be fiercely preserved. As a servant of my king, I’ll continue to protect his legacy with what is left of my life,” he said.

KwaZulu-Natal premier Sihle Zikalala reiterated the king’s role in fighting disease and said he worked with government to encourage compliance with Covid-19 regulations. Besides that, Zikalala said that King Zwelithini also played a key role in bringing peace.

“We respect him for encouraging political tolerance among the different political parties. He also intervened in hostel and taxi wars to bring about peace.”

He added that the monarch had contributed to the economic development of the province.

We live in a world where facts and fiction get blurred
In times of uncertainty you need journalism you can trust. For only R75 per month, you have access to a world of in-depth analyses, investigative journalism, top opinions and a range of features. Journalism strengthens democracy. Invest in the future today.
Subscribe to News24
Next on City Press
Nel is determined to find prosecutable grounds in the popular Botswana court case