While the global economy will no doubt be shaped by local issues in every country, international trends will affect South Africa. Picture: iStock

While the global economy will no doubt be shaped by local issues in every country, international trends will affect South Africa.

Here are three shifts occurring in the UK that will probably be mirrored in South Africa, albeit on a smaller scale initially:

The rise of the socially conscious investor and spender

The younger generation has had enough. They’re inspired by activists like Greta Thunberg, who warn that we’re not doing enough to save the planet, which will most likely reflect in investments abroad and in South Africa. There’s also going to be a lot more focus on what the leaders of a company do and say.

Robert Lewenson, governance and engagement manager of the Old Mutual Responsible Investment team, explains: “Investors are starting to realise that it’s possible – and necessary – to align their investments with their values. Investors worldwide are seeing and experiencing the effects of the climate crisis and rising social inequality. Many, particularly millennials, are questioning the role of their investments – such as their retirement savings – in either mitigating or increasing these long-term systemic risks.”

In the UK, there’s an increasing trend for retailers to donate some of their profits to charity, particularly around Christmas time. People generally want to give back, but, as purse strings tighten, South Africans are going to want to spend less, so there won’t be much left for charity. But if retailers allow shoppers to buy their usual items while donating money at the same time, they will most likely see an increase in support.

Fraudsters will get more sophisticated

Digital banking security is being tightened across the globe, and thieves are finding it increasingly difficult to steal money using conventional hacking methods. In South Africa, card fraud is increasing, with lost or stolen debit card fraud amounting to 42.5% of all debit card fraud in 2018, according to the SA Banking Risk Information Centre. This will most likely continue this year. Vigilance, especially when transacting using an ATM, will be key.

However, another easy way for criminals to get their hands on your money is to convince you to part with it, and that’s exactly what happens in the UK. Authorised push payment (APP) scams occur when you unwittingly transfer money from your own bank account to another. Often, this is the result of the scammer pretending to be from a bank’s fraud division or from a government body like the SA Revenue Service. During the first six months of last year, APP scammers stole £616 million (R11 879 billion), according to banking body UK Finance. With such “success”, it’s undoubtedly going to continue.

It’s been notoriously difficult to convince banks to back start-ups, so this has opened the doors to alternative financing options such as crowdfunding and specialist lending financial technology platforms in the UK. This trend will most likely gain some momentum in South Africa. The rise in open banking (which has led to more transparency, and has opened up new products and services) will no doubt help make this process smoother.

Idan Jaan, co-founder and CEO of lending start-up Fundrr, explains: “As South African entrepreneurs are entering a more digital age, data will be more available to the lenders and, with that, we believe lending to small businesses will be more efficient in the future.

“We launched in June 2018 and have seen a vast number of other lenders entering this market since then. This is mainly because the banks simply do not look at these small businesses. There has been a huge push from government to empower small businesses, so lending has become a really popular sector for start-ups.”

Related Links
Netflix strengthens its strategic investments in South Africa
Investing in implementation models for water security and resilience a must
The 12th Man: Tinkler, Mosimane prove that locals can do the job
Share
Next on City Press
Don’t fall for WhatsApp get-rich-quick scams 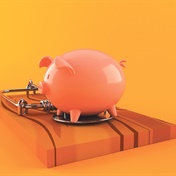