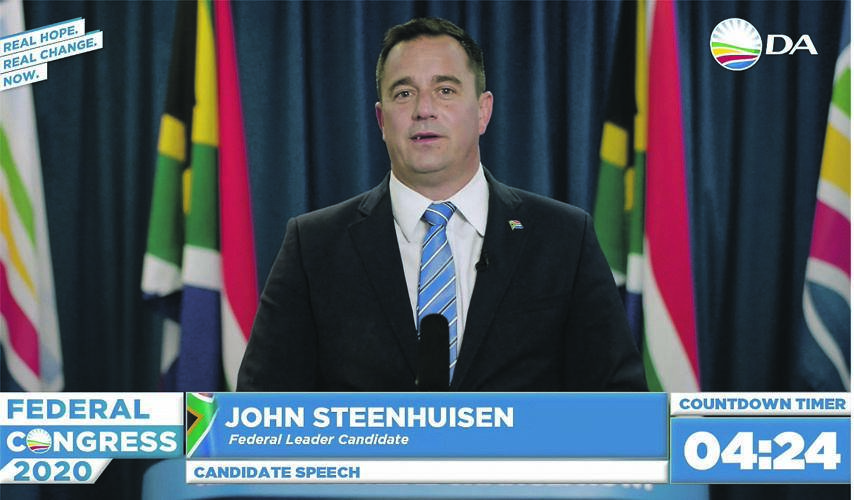 South Africa’s first-ever virtual political congress went off without any major glitches as more than 2 000 delegates cast their votes to elect the DA’s leadership for the next three years.

An air of secrecy veiled the lead-up to the elective congress, particularly the DA’s refusal to reveal to the media the physical locations of its hybrid centres (designated spots where delegates battling to log on from home could cast their votes).

However, those who made use of them praised how well equipped they were and how efficiently they handled the voting process.

The historic virtual congress lived up to its billing as a quantum leap into the new digital age of politics. with some delegations telling City Press that the format should continue to be used by the DA even post-Covid-19, given how smoothly the voting had run.

According to delegates who voted in the Vaal in Gauteng, the procedure was quick and trouble-free.

“We were able to vote for our candidate. It was easy and fun because they explained to us how to vote, which made it simple to understand.”

A delegate who used the digital process in the North West told City Press that they were happy with the new electronic voting system, as it saved them having to stand in long queues that might have posed a health risk in terms of Covid-19 infections.

Delegates from KwaZulu-Natal, however, said that while the system had been presented to them as perfect, they found it challenging.

“We’re open to any move to digitalisation [in future], but we were never sure of the reliability of the system we were using.

“We felt awkward because this was new to us. Having to raise our cards made us feel like kids, but apart from that, everything went well,” they said.

A few delegates said they felt uncomfortable about sharing a computer who others who had come to cast their votes.

“For me, the issue was what would happen if the computer had a glitch and didn’t count my vote. Given the opportunity, I’d still choose the old method, where I was sure that my vote was counted, rather than putting my faith in a computer,” said one.

The delegates said they felt that some motions would have been passed if they had all had a chance to vote on them, instead of motions being supported and rejected by 10 members.

Their bone of contention was the DA’s inability to support former youth leader Mbali Ntuli’s motion for the party to have a deputy leader. READ: 'My experience on governance speaks for itself' - Zille on DA leadership race

Congress delegates, however, said that if the motion had been presented to everyone, they would have voted to support it.

“The only problem with this virtual congress is that we have minimum people deciding what should happen. To be honest, if we’d had a voice [about Ntuli’s suggestion], the matter would have been passed. Look at KwaZulu-Natal – it has a provincial leader and a deputy leader and there’s never been factionalism there,” they said.

Early on Saturday, DA leadership contenders Mbali Ntuli and John Steenhuisen made one last plea to delegates at the congress to vote them into power so that they could help the party overcome its hurdles and lead it into the next local government and national elections.

We live in a world where facts and fiction get blurred
In times of uncertainty you need journalism you can trust. For only R75 per month, you have access to a world of in-depth analyses, investigative journalism, top opinions and a range of features. Journalism strengthens democracy. Invest in the future today.
Subscribe to News24
Related Links
Final pitch: Mbali Ntuli and John Steenhuisen state their cases ahead of DA elections
Finally, DA gets its wish as Tshwane mayor is elected
Next on City Press
ANC launches tool to asses performance of councillors