The DA accuses the ANC government of being terrified of Malema 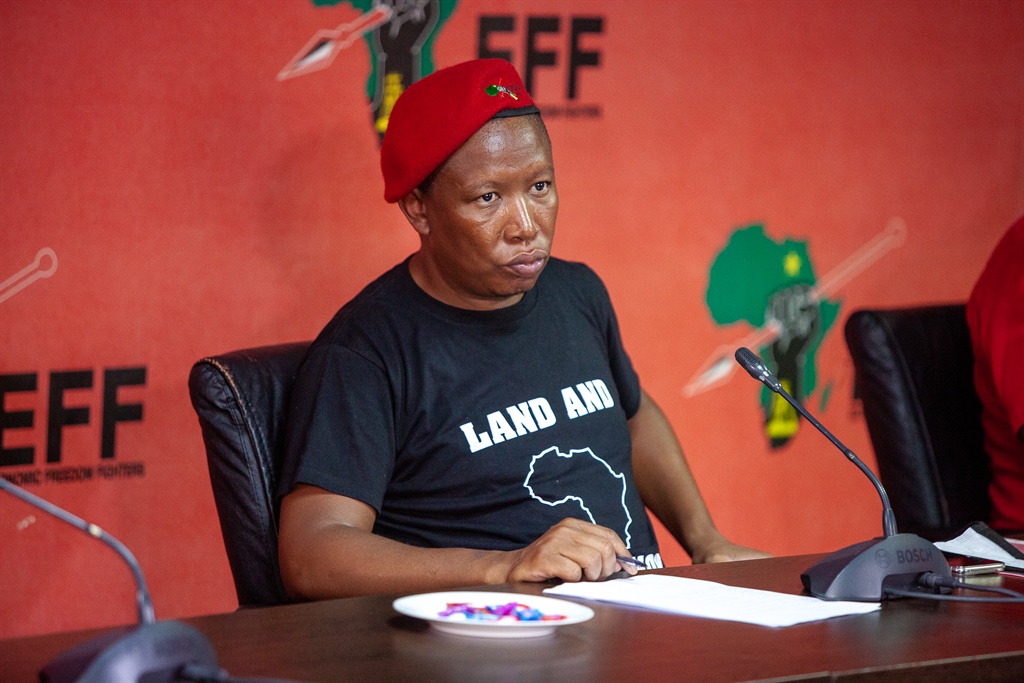 Malema sparked outrage and fierce debate this week after he told EFF supporters in Mohokare, in the Free State, that they should act against police for abusing them in recent protests against racism in Senekal in the Free State and Brackenfell in Cape Town.

“If SA police want a fight, they must declare it. We will treat them the same way we treated them in the 1980s; we will not only fight them at the picket lines, but we will also go to their homes and fight them in their own houses with their own families,” Malema said.

Read: Police minister and Popcru warn Malema against threatening officers of the law

The DA’s shadow police minister Andrew Whitfield said the ANC government appeared terrified to act against Malema, despite “numerous incidents of incitement, threats and violent rhetoric towards citizens, businesses and now the state”.

“Minister Cele must convert his words into action and lay charges against Malema. If he is afraid to do so, the DA will,” said Whitfield.

“We cannot stand by and allow the hard-working members of the SAPS and their families to be threatened in this manner. Our policemen and policewomen deserve better.”

He said Cele’s condemnation of Malema’s comments ring hollow if not followed by decisive action.

“Strong and decisive action must follow to reassure our men and women in blue and their families that their minister is on their side, not the side of the EFF and its leader. It has been more than 48 hours since Malema issued his threat and the minister has done nothing,” said Whitfield.

The union said more than 1 000 police officers had approached them to express concern about Malema’s comments.

“Solidarity has been inundated by police members from across the country expressing their shock, dismay and utter disgust at Malema’s words and threats. It is unacceptable for a political leader who has taken an oath to honour and respect the Constitution and other legislation of the country to rage against the police in such a violent manner,” said Solidarity’s Renate Barnard.

Read: Thuli Madonsela on Zuma, the EFF, the DA and the ANC

AfriForum’s head of policy and action Ernst Roets said it was clear Malema believed he was above the law.

“The reason Malema has been making these statements is that, so far, there have been no consequences for all the previous incidents where he openly incited violence. If the police do not deal with this matter sufficiently seriously, Malema will see it as confirmation that he is above the law,” he said.

AfriForum’s private prosecution unit said it would monitor the matter to ensure justice was done.

“If Malema is not prosecuted by the National Prosecuting Authority, the private prosecution unit will prosecute him,” said Roets.

In response to Malema, Cele expressed anger at the EFF leader’s statements. He said Malema had “crossed the line” and that his threats would not be taken lightly.

In a second statement, issued on Wednesday, Cele reiterated that there would be consequences for anyone who acted on the threats against police officers or their family members.

Cele called on police members to protect themselves saying police were more than capable of defending themselves, should they be under any attack.

However, Whitfield said that the statements were not enough to defuse the situation.

We live in a world where facts and fiction get blurred
In times of uncertainty you need journalism you can trust. For only R75 per month, you have access to a world of in-depth analyses, investigative journalism, top opinions and a range of features. Journalism strengthens democracy. Invest in the future today.
Subscribe to News24
Related Links
Police minister and Popcru warn Malema against threatening officers of the law
Friends & Friction | It's not the borders, it's the leaders
Survey finds ANC support at 50%
Next on City Press
Amcu head Mathunjwa says his removal was unlawful