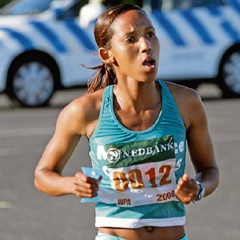 Thozama April has been banned for two years. PHOTO: Photo24

The improved performances by South African athletes locally and internationally have been spoilt by the news that yet another top athlete has failed a doping test.

Distance runner Thozama April (29) has been banned for two years after testing positive for a banned substance.

The news of April’s suspension was revealed at an Athletics SA (ASA) board meeting last weekend.

Chief executive of the SA Institute for Drug-Free Sport (Saids) Khalid Galant said the Athletics Gauteng North athlete was tested after the 10km race at the Cape Town Marathon in September last year, where she finished third.

Galant said April’s ban started from December 29 last year until December 28 next year because her sample was affected by a backlog in sample analysis at the doping laboratory last year.

“The 2014 backlog of samples was resolved at the end of February [this year]. Ms April also contested the doping charge and opted to have the confirmatory B-sample analysis. This process extended the timeline of the case before a decision was handed down,” explained Galant.

“We are disappointed to say the least,” said Skhosana.

“She has been around for so long. It is important for athletes who chase big prize money in competitions to know better. Information on banned substances is freely available and accessible.

“In my view, the government must also regulate the substances that are supposedly energy supplements.”

Galant said Saids had a national anti-doping education programme that covered all the sports codes, including athletics.

“However, our education and awareness programme does not guarantee that athletes will not cheat or claim that ‘they did not know’.

“Thozama April is a professional athlete who has a diploma in sports management and was tested before this event. The tribunal did not accept her argument that she did not know. She also did not reveal what the possible sources of doping positives could have been, so inadvertent/accidental doping could not be considered.”

April represented the country at the IAAF World Half Marathon Championships in Nanning, China, in 2010, where she came 50th.

She joined another marathon runner, Martinique Potgieter (25), who is serving a two-year ban after testing positive for a stimulant and a diuretic after finishing ninth in the Comrades Marathon last year.

She was the only runner who failed among the 20 who were tested at the famous ultramarathon.

We live in a world where facts and fiction get blurred
In times of uncertainty you need journalism you can trust. For 14 free days, you can have access to a world of in-depth analyses, investigative journalism, top opinions and a range of features. Journalism strengthens democracy. Invest in the future today. Thereafter you will be billed R75 per month. You can cancel anytime and if you cancel within 14 days you won't be billed.
Subscribe to News24
Next on City Press
What’s in City Press Sport: SA20’s R10m cash splash | R105k a week just for laundry