A day with a Galaxy of future stars Tshegofatso Nyama is one of the youngest members of TS Galaxy

A TS Galaxy FC branded Iveco bus was the obvious sign that the NFD club’s players had arrived for their training session at Panorama Sports Club in Roodepoort north of Johannesburg last Thursday.

The facility, nestled against townhouses in the suburb of Radiokop, can’t compare with Kaizer Chiefs’ state-of-the-art establishment in Naturena.

Such is the divide between the two teams that will face off in this year’s Nedbank Cup final at Durban’s Moses Mabhida Stadium on Saturday.

The Galaxy squad had reconvened on Thursday afternoon after a few days off after a gruelling NFD campaign that ended last Sunday.

As the club’s head of security, Thulani Khumalo, welcomed the City Press team, the Galaxy players emerged from the dressing room, shook hands and made their way to the training field.

The proceedings started with a prayer, which Khumalo – who was part of the Mpumalanga Black Aces staff when they reached the 2008 final – said was a compulsory routine for the team. After almost two hours of training, coach Dan “Dance” Malesela said of the big day ahead: “It hasn’t sunk in that much. Maybe reality will dawn during the week.”

Galaxy wrapped up their league campaign with a goalless draw against KwaZulu-Natal’s Uthongathi FC. The Mpumalanga outfit ended eighth on the NFD log.

However, The Rockets, as Galaxy are known, were a different animal in the Ke Yona Cup and their comeback victories against Cape Umoya United in the quarterfinals and Golden Arrows in the semifinals was no mean feat. 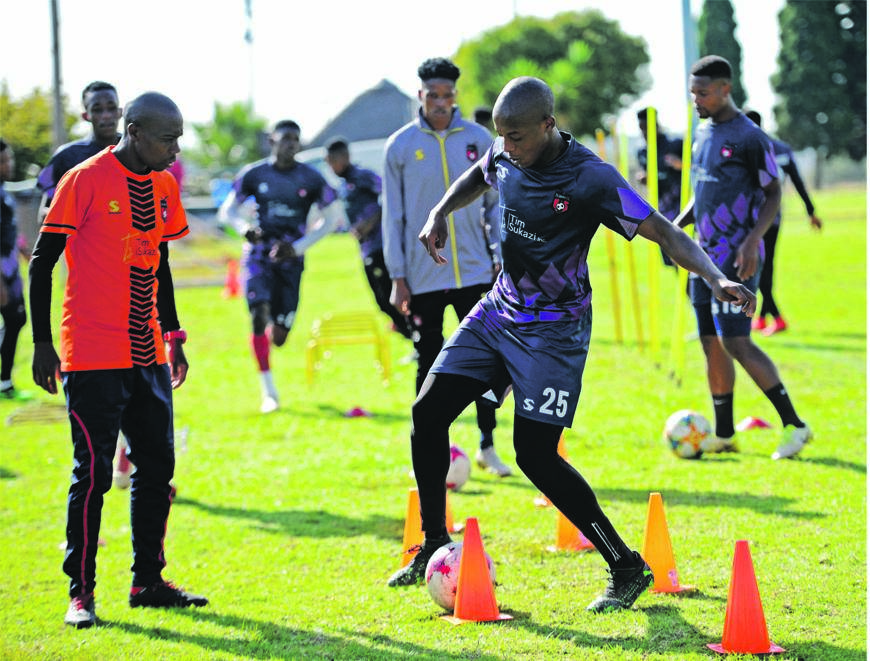 Playing in front of a sold-out crowd, dominated by Chiefs supporters at Moses Mabhida on Saturday will test Galaxy’s mental strength, Malesela said.

“I don’t think any of them have played in a cup final before, but at least they are used to playing in front of big crowds at our home games.”

Galaxy averaged attendances of 10 000 at their home ground of Kameelrivier Stadium in Siyabuswa township in Mpumalanga.

Tshegofatso Nyama (19) and Siyabonga Khumalo (18) are the youngest members of the squad, and agreed that the huge turnouts at home would prepare them for Saturday. Nyama, a graduate of the famed Stars of Africa Academy in Johannesburg, said: “I grew up watching cup finals on TV, but being part of the occasion is a dream come true. It is such an overwhelming feeling.”

He has been a regular for Galaxy and has featured in all the team’s five cup matches.

Striker Zakhele Lepasa (22), on loan from Orlando Pirates, has contributed to the team’s road to the final, including coming off the bench to bag a brace that sunk Arrows 3-1 in their semifinal.

Reaching the final has made him happy. He had to overcome the disappointment of being loaned out to the lower division when he was initially part of Pirates’ preseason camp squad.

“It was hard because my family had hoped that I’d be playing PSL football this season. I remember when I was told I was going to Stellenbosch FC, my heart was sore,” he said.

He said the attention he was getting at Galaxy was good for his career: “It gives me hope that Pirates are checking my progress. They get regular reports from Galaxy. I hope we win the Nedbank Cup as this will open doors for us.”

Malesela said he would share his experiences to help his charges overcome stage fright.

He was in his early twenties when he became one of the youngest captains of Pirates to lift a major trophy – the 1988 Bob Save Super Bowl – after Bucs beat Chiefs in the final.

“We’ll get other people to come in to motivate our boys. We’ve already had a few legends in Bernard Lushozi, Eric Ramasike and Roger Feutmba [all Malesela’s former club mates at Pirates and Sundowns, respectively] coming here. We need all the help we can get.”

Malesela warned that Chiefs can be “dangerous”, even though Amakhosi are at their lowest ebb.

“Everybody is mocking them for not winning cups in a long time. But this makes them even more dangerous because they want to get this one.”

Galaxy owner Tim Sukazi is equally excited about the outfit he put together when he bought the NFD status of Cape Town All Stars last year.

“People in South Africa were yearning for a fresh entry; a humble club that identifies with its community. That our team is made of South African players talks to the talent we have in our country,” said Sukazi.

He said the lack of facilities in the former KwaNdebele homeland was the reason Galaxy were operating from Johannesburg. Their clubhouse is in Fourways and they travel to Mpumalanga only for their home games.

Related Links
Zlatan happy to make Toronto his 500th goal victim
WATCH: Ibrahimovic helps Galaxy fightback in 'El Trafico'
Ibra-mania as Zlatan's double seals Galaxy fightback
Share
Next on City Press
Be a part of the Laureus family and stand a chance to win a Merc