Cheetahs, Lions come in hot at the Currie Cup 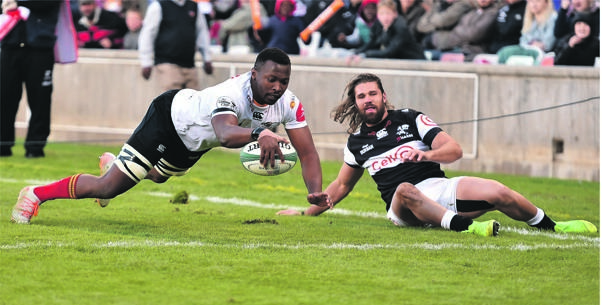 Junior Pokomela of the Cheetahs during the Currie Cup semifinal match against the Sharks in Bloemfontein. Picture: johan Pretorius / Gallo Images

The Cheetahs and the Lions emerged comfortable victors at home over the Sharks and Griquas, respectively, last night to book a Currie Cup final date in Bloemfontein on Saturday.

Franco Smith’s men scored six tries to the Sharks’ four in a pulsating affair, finishing the game with a final score of 51-30.

The Lions prevailed in a less entertaining affair against the Griquas, where they were deserved 34-19 victors after a dominant performance by their forwards.

The result means the Lions and the Cheetahs will play their first final since 2015 and 2016, respectively, in a repeat of the Currie Cup final the last time the Springboks won a World Cup in 2007.

It was a game in which former Springbok scrum half Ruan Pienaar rolled back the years with a performance in which he pulled the Cheetahs’ strings from start to finish. Up against the rising star of a man 15 years his junior in the gifted Sanele Nohamba, Pienaar dragged his team by the scruff of the neck to the promised land.

The former Sharks man made the pass for the Cheetahs’ opening try and the first of flanker Junior Pokomela’s two tries; scored the hosts’ second to draw the scores level on 23-all with a quarter to go; and kicked three conversions in the process as Smith’s men came back from a 20-11 half-time deficit to secure a home final.

In an end-to-end game that – on the balance of the skill, intensity and physicality shown here – could well have been the final, the Sharks, led by Nohamba and the equally gifted full back Aphelele Fassi, played their part in the tit-for-tat exchanges until the 70th minute, when a final spurt by the Cheetahs produced tries from Joseph Dweba, Ox Nché and Jasper Wiese to win the game.

In the first semifinal, Lions fly half Shaun Reynolds had prevailed in the battle of the boot between he and his opposite number, Griquas captain George Whitehead, to help his side deny the Kimberley side what would have been their first Currie Cup final since 1970.

Aided and abetted by a pack of forwards who mangled the visiting scrum, Reynolds scored 19 of the Lions’ 34 points, via five penalties and two conversions, while Whitehead chipped in with 14 of the Griquas’ 19 points.

In a game that was similar to the Cheetahs and Sharks’ match in being open, but was often undermined by a steady stream of handling errors, the Lions stopped the Griquas at source in bossing their pack and defending heroically whenever the visitors were within striking range.

Along the way, the hosts also outscored Brent Janse van Rensburg’s men by three tries to one, with winger Stean Pienaar, number eight Hacjivah Dayimani and flanker Marnus Schoeman each scoring a try, while centre Chris Smit replied for the visitors.

Griquas had their chances, but a combination of often unforced handling errors and defensive pressure from the Lions prevented them from building up a head of steam.

Alas, all they take from a wonderfully competitive season is how close they came to securing a famous final.

Related Links
Persistence is this prop's calling card
Who should coach the Bulls? Here are the candidates’ credentials
Side Entry: Cheetahs need to choose – either Pro 14 or Currie Cup
Share
Next on City Press
Downs, Bucs in goalless stalemate as PSL action resumes