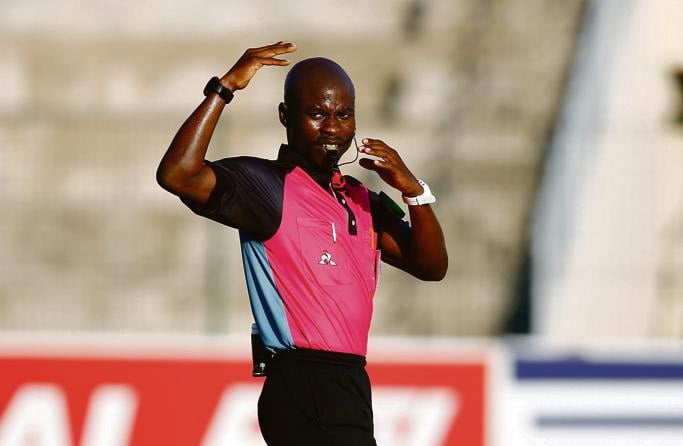 Referee Jelly Chavani was the centre of another controversy after he awarded Kaizer Chiefs a penalty in the dying minutes of their DStv Premiership match against AmaZulu in Durban yesterday.

Keagan Dolly converted from the resultant spot kick as Chiefs thanked their lucky stars, snatching a point in a match that AmaZulu deserved to win.

LATE DRAMA ?? Chiefs are awarded a penalty in the 94th minute and Keagan Dolly steps up to convert to rescue a point against AmaZulu.#DStvPrem pic.twitter.com/B5JLwkKtpN

Usuthu head coach Benni McCarthy was left dumbfounded at the end of the match as Chiefs benefited from the refereeing error.

Earlier in the year, Chavani was suspended by Safa for making erratic decisions.

He was back at it again as his dramatic decision robbed Usuthu of three points. Even with the fortuitous draw, Chiefs have much to ponder in the upcoming Fifa break as they continue to falter during coach Stuart Baxter’s second coming.

At this early stage in the season, Chiefs are hovering just above the relegation zone.

AmaZulu have their groove back and are playing well, but that will be little consolation to them following the injustice they suffered.

After their poor start, they now look like the title contenders they were last season. Luvuyo Memela scored what was supposed to be the winning goal in the 48th minute. He enjoys scoring against Chiefs and few of us will forget the way he terrorised them in Soweto derbies during his time at Orlando Pirates.

Chiefs have been threatening all game but it's Benni's side that take the lead, courtesy of Luvuyo Memela.

One would not be too wrong in suggesting that the clash at Jonsson Kings Park Stadium was between a club on the rise and another in rapid decline.

AmaZulu have been in the ascendency since they were bought by respected businessperson Sandile Zungu. Amakhosi, on the other hand, are a sinking ship and have been trophy-less since 2015.

Chiefs looked to the past in an attempt to end the rot when they reappointed Baxter, who was the last tactician to guide them to a trophy.

This last-ditch attempt to save themselves is already leading to some serious speed bumps.

The problem within the squad appears to be players who are incompatible with each other. In defence, Mulomowandau Mothoho is too slow and his decision-making is not the best. This makes it difficult for him to play as a sweeper alongside Njabulo Ngcobo, who is comfortable with the ball for a defender and sometimes enjoys pushing forward.

In central midfield, Cole Alexander and Phathutshedzo Nange are not commanding enough as the main anchors in the team’s engine room.

READ: Benni believes they have survived the worst as AmaZulu prepare to face Amakhosi

In attack, Billiat and Dolly are not the same players they were half a decade ago, when they won the CAF Champions League with Mamelodi Sundowns.

Their passes are not as connected as they need to be. Dolly, at times, looks sluggish and is not menacing the opposition defence the way he did the last time he played in the local league, which was prior to his move to France in 2017.

At his best a few years ago, Dolly was a threat with his crosses into the box and also had a powerful left boot that he put to good use. He would often score cracking goals from outside the box.

It does not help that Chiefs have a lengthy injury list of attacking players, including main strikers Leonardo Castro and Samir Nurkovic.

Not much is going right for them and they need to improve their situation on the field of play, as no team can depend on favourable refereeing decisions to compete stay afloat in the league.